Why wasn't the red book needed to control the Winter Soldier in the first movie that featured him?

The CinemaSins episode for Captain America: Civil War asks this question about the red book that is important to the movie:

This book that supposedly controls the Winter Soldier is introduced here, but wasn't referenced in Winter Soldier at all, and Zemo found it buried in some asshole's wall in Cleveland. So how did they control him in the last movie?

The book appears to contain the codewords used by Vasily Karpov, but it isn't the book that controls him, it's the codewords.

Karpov evidently wrote them down in the book so that he'd remember them and so that others could activate the Winter Soldiers in his absence. That doesn't mean that Karpov (and others) couldn't simply have memorised the words or written them down on a scrap of paper.

You might want to note that in the comics, his code words are seen to be used without the book 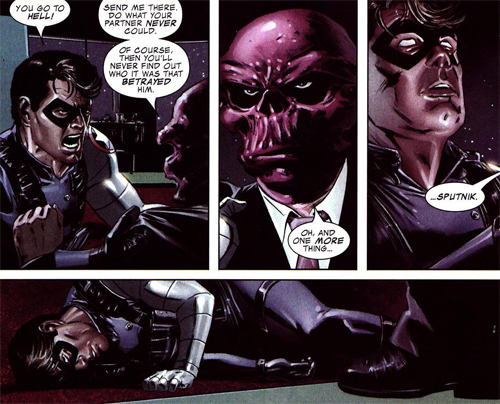 We see in Captain America: The Winter Soldier that he is controlled through the use of memory wipes. He doesn't know who he is, and as such he obeys orders because he may as well - but when given a good enough reason to rebel (such as recognising Steve Rogers), he does - and we see that in the finale of the film when he refuses to kill Steve.

In Captain America: Civil War, however, the trigger words "longing", "rusted", "seventeen", "daybreak", "furnace", "nine", "benign", "homecoming", "one" and "freight car" seem to force his compliance to orders. We see this in the prison break sequence of Captain America: Civil War - Bucky nearly kills several people on his way out of the compound (including Sharon Carter, Tony Stark and Natasha Romanoff), despite the fact that he is resisting control right up until the final word is said, at which point it looks as if he completely loses control of his actions.

43
Why is Civil War a "Captain America" movie?
6
Where did Helmut Zemo get all his HYDRA knowledge?
38
Which MCU movies are essential background for Civil War?
18
What happened in Australia?
28
Is there anything special about the words used to activate the Winter Soldier?
-1
Does Bucky Barnes have Dissociative Identity Disorder?
29
Why did the Winter Soldier kill these characters?
6
Why did Bucky Barnes ask "What did I do?"