What 50’s movie has aliens doing open-heart surgery in a cave, and Richard Conte on a beach?

I found Gwendolyn Greer’s question about ‘Pandora’s box’ on Google because I also wanted the name of the film which has the scene she describes, i.e. ‘Kiss Me Deadly’.

There is a similar sci-fi film which I saw circa 1959, in a cinema when I could only get admission to see a ‘U’ film, for an unaccompanied child, but it should have had an adult rating.

The first scene I remember is a man standing in his wet suit in a small boat at sea, when a radioactive cloud rolls over him, and the wet suit collapses as if empty.

Next I’m convinced I saw Richard Conte standing on a beach, staring with great trepidation at a partly-opened, snuff-box-like object, which is hissing at him, reminiscent of ‘Kiss Me Deadly’.

Lastly there is a group of bug-eyed aliens in a cave. They have an unconscious man on the operating table in front of them, and his heart is sat on the outside of his chest, beating away.

I’ve looked at a list of Richard Conte’s films on Wikipedia, and at lists of sci-fi/horror & noir films of the late fifties and early sixties but I can’t find the name of this film.

Thanks for any answers. 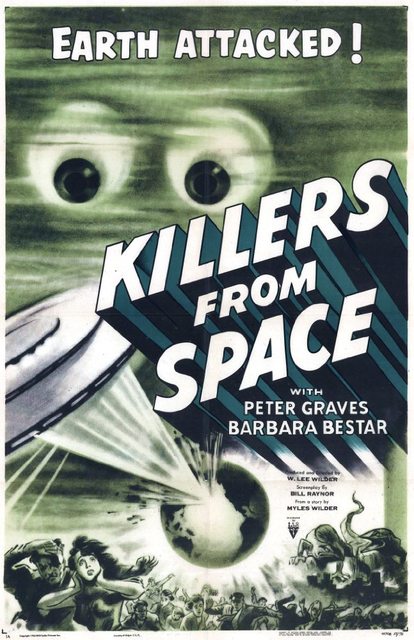 The final scene mentioned is a perfect match for one found in Killers from Space.

Here are the aliens, with very protruding eyes (probably in reality ping-pong balls taped over the actors’ real eyes): 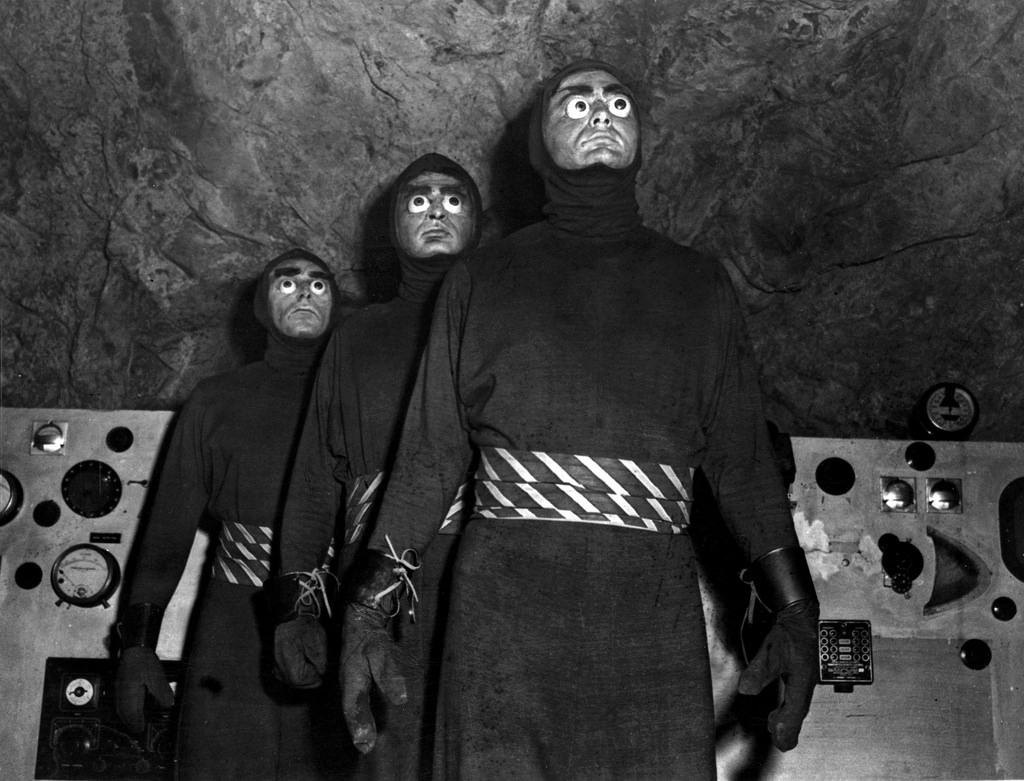 Here’s the unconscious man with his heart beating outside his chest: 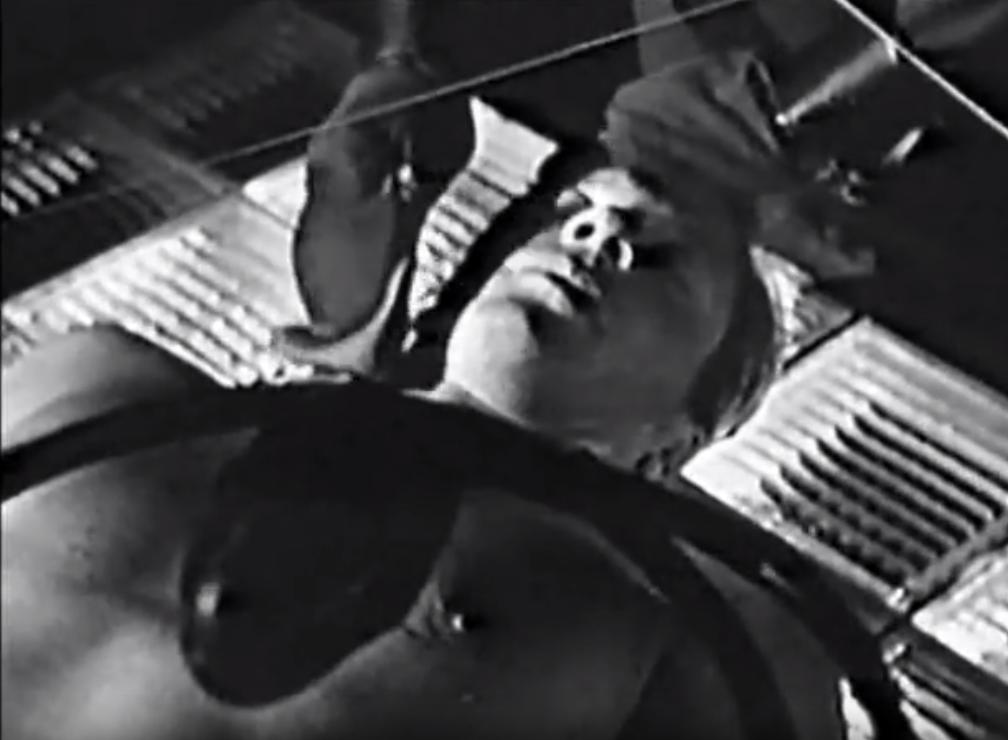 The aliens are indeed performing surgery on him in a cave, by waving strange instruments: 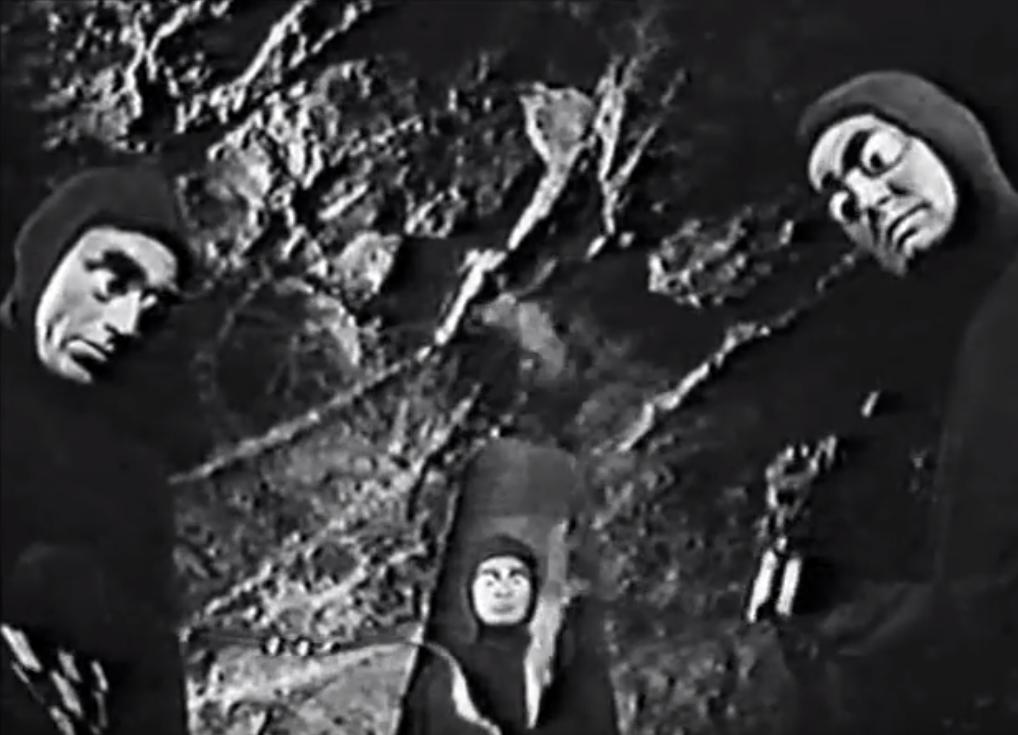 This matches so well that is almost certainly the scene described in the question. However, while it has been featured in various films, as indicated in this list of connections, none are around 1959. In addition, a look at Richard Conte’s filmography does not seem to reveal any movies from around 1959 that could plausibly have these scenes.

4
Looking for movie title, had a "pandora's box" in it

34
What was this story, and why did they have heart plugs?
10
What movie has aliens hunt people using living tentacled discs?
10
Anthology with "13th floor" story, a man called Richard Javelin and a Bonanza store which has everything
1
What movie has a sofa time machine and a flying bike?
13
Movie about a couple doing calculations to open a door to another world
9
Anime movie about space aliens and robots
7
Movie/film where a family and friends are trapped on a beach that speeds up time
18
What story has an alien symbiote bond with a human in a cave?
6
Woman exploring a cave has a creature jump into her face and control her