Who created the TET in Oblivion?

In the final scene Jack goes to the TET

to blow it up.

The video has spoilers.

And when he gets there he is confronted with something that also looks like the TET with a huge red light in the middle. Jack refers to it as Sally and we are led to believe that this is who has been giving commands to them all this time. 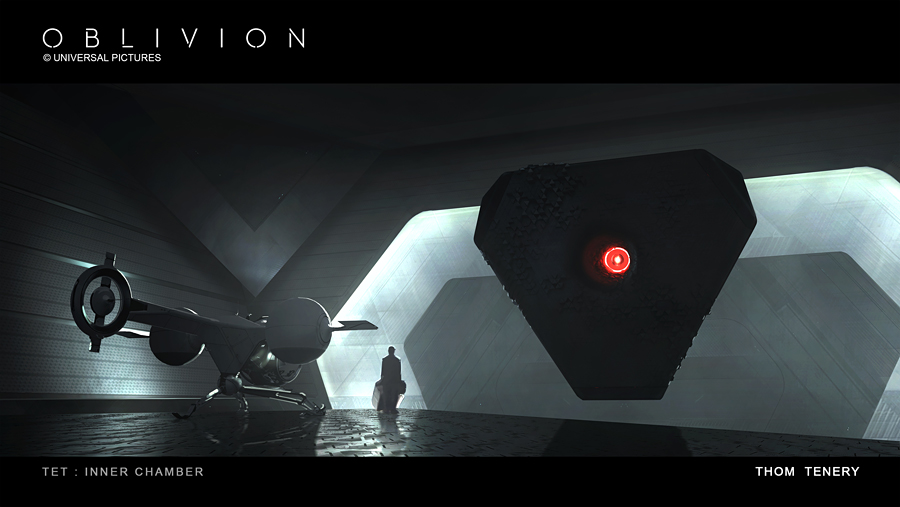 So we know it is a machine, but who or what made the TET and Sally?

This was discussed by the film's Director in an interview for CinemaBlend. In short, the aliens who created the TET are aboard the ship, but as uploaded 'digital' minds rather than as physical forms, that being the only way in which any crew could survive the immense amount of time that it takes to travel from star system to star system.

Q. We see the Tet at the end-- were there ever any creatures? Was it always that Borg voice?

Joseph Kosinski: Y'know, I met with a group of scientists at the beginning of this project. My own belief, and the consensus among the scientists, was that if we ever actually encounter another intelligent life form, it will much more likely be in the way it is depicted in Oblivion than the way it's depicted in other science fiction films. It won't be some other bipedal creature. The time required to travel the distances that exist between stars is so great that organic life forms aren't going to be able to survive the trip. Any hyper-advanced civilization that has the technology to do what the Tet does is going to be a deeply digital life form. We're ants on an ant hill, basically.

There is some information here:

Very little is known about the Tet's origins. According to Malcom Beech (Played by Morgan Freeman), the artificial intelligence feeds off of one planet after another for its resources, most likely for its own survival, as it was only interested in fusion energy during the harvesting of Earth.

It was detected in deep space on it's way to earth. Which was why Jack and Co visited it. They were on their way to Titan on an exploration mission.

At the start of the film Tom Cruise's character operates under the assumption that the Tet is a power station for humanity, relocated to Titan after an alien attack and invasion of Earth. The alien invaders, Scavs, are still on Earth and try to destroy the Tet. Sally is the mission controller for the Tet.

In the end it is revealed that the Scavs are what remains of humanity and that it was the Tet that is of alien origin and invaded Earth and killed most of humanity. Sally is an AI controlling/running the Tet. The reason for the invasion is never revealed, nor are the origins of the Tet or Sally.

According to the interview, the Director speculates on what the Alien Entities, Beings or Creatures could or would be like. If I understand correctly the above, Director Kosinski does not say "this is what they were", so it may remain (deliberately?) vague. You decide.

If this, however, would not be the case, the most plausible possibilities could be one of the following:

Some of these possibilities can be found among solutions for the Fermi Paradox. Many other scenarios are plausible, Director Kosinski's and the Scientists' consensus are of course very high on the list.

However, a sufficiently advanced Civilization, especially one capable of creating an ASI like TET, should be able to find ways of Superluminal or FTL {Faster Than Light} travel, like wormholes, using Time Dilation, etc. The Directors explanation may not be the only one, simply based on Human knowledge and (limited) understanding of this Universe and the Cosmos.

Space travel is impossible, even with light speed. We can't even travel beyond our solar system. The amount of time it would take would be generations. And the resources you'd need to accomplish such a feat would be horrendous. Way beyond the realm of possibility. It takes about two years to get to mars, and that's 'right next door'.

What if there was no warp speed? What if there was no 'hyperspace'? Boom, Bash, Bakata ... snap of a finger and you're there. How romantic (maybe not). How would you explore the universe? And the answer to that is you wouldn't, because you couldn't. You'd send your machines. And thats probably the only real alien contact the many species of the universe ever have, if they ever have any. It won't be person to person. But person to machine. Probes. Artificial intelligences. As alien as can be. Just like with us. We won't make contact with other alien races on their planets either. Our machines will.

Thats what the Tet is. It found us, and then it had to gas up.

10
Oblivion: Odyssey flight recorder
12
Why does the TET not have some communications satellites?
6
The pod with the sleeping astronauts
4
The 2nd Jack and Vicka
9
How did the Tet destroy Earth's moon?
3
What happened to the water processors in Oblivion?
5
Why did it take Jack-52 three years to find the cabin?
3
Why do they make out that the Scavs run on all fours?