Why did Vizzini have the wine and tablecloth all laid out?

In the film The Princess Bride, when the Man in Black approaches Vizzini for the final of his three 'duels', the Sicilian is sitting at a makeshift table complete with wine, cups, and a white tablecloth.

Why does he lay all this out in preparation for his enemy's arrival?

The suggestion of a 'battle of wits' using poisoned cups comes from the Man in Black, as does the poison itself - not from Vizzini. A battle of wits might possibly have been Vizzini's plan, but could he really have anticipated that the Man in Black would carry poison (but without anticipating his immunity to it), and laid out the table in order to prod him into proposing this specific form of combat? (In any case, hiding behind a tree and knifing his enemy from behind seems much more Vizzini's style.)

Is this explained in the book, perhaps?

It seems most likely that he was just carrying a picnic.

Consider: Vizzini considered it "inconceivable" that the man in black could defeat Inigo:

"See?" Fezzik pointed then. Far down, at the very bottom of the mountain path, the man in black could be seen running. "Inigo is beaten."

He also considered it "inconceivable" that (earlier), the man in black could catch up with them:

"I can feel him," Fezzik said. "His body weight on the rope."

All of this would have to happen before the man in black could engage in a battle of wits with him.

Why, with all this and his exceeding arrogance, would Vizzini bother to make elaborate preparations for an event that he had never conceived could occur? It’s made pretty clear that his foresight is far inferior to what he believes it to be.

Besides, Vizzini spends a lot of time threatening to kill Buttercup in order to stop the man in black from attacking him. Why bother to threaten her if he had sufficient foresight to know that he could entice the man in black into a game of wits.

Don’t forget that Vizzini has not only wine but also cheese and apples.

Vizzini was waiting for him.

Indeed, he had set out a little picnic spread. From the knapsack that he always carried, he had taken a small handkerchief and on it he had placed two wine goblets. In the center was a small leather wine holder and, beside it, some cheese and some apples. The spot could not have been lovelier: a high point of the mountain path with a splendid view all the way back to Florin Channel. Buttercup lay helpless beside the picnic, gagged and tied and blindfolded. Vizzini held his long knife against her white throat.

This is also the case in the movie: 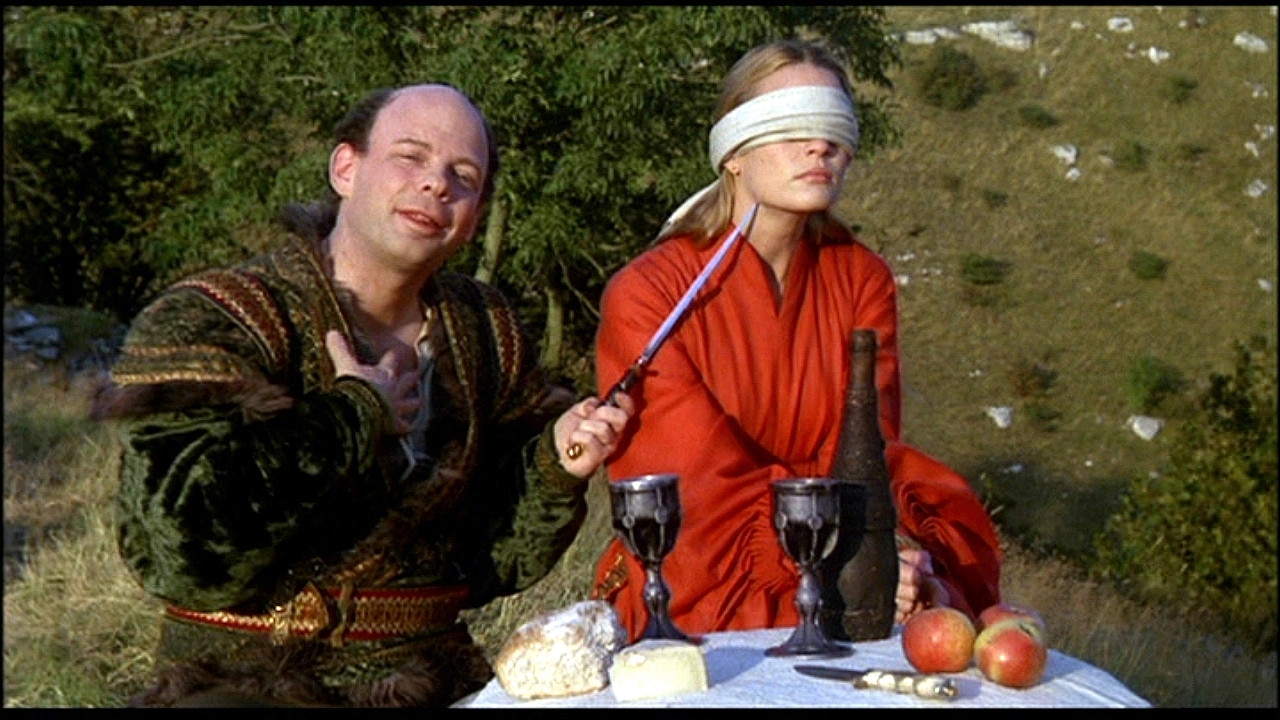 Vizzini’s going on a bit of a journey. He needs to eat. Why not bring some food and wine?

That still does not explain why he laid out all the food. Most likely, though, he was sufficiently confident that Fezzik would defeat the man in black (surely it was inconceivable that he could lose) that he believed it safe to have lunch, and either intended to eat with Fezzik or would have forced Buttercup to join him (thus the two goblets). Once he saw the man in black coming, he held his knife to Buttercup for protection.

In the movie or the book, the Man in Black simply arrives and the meal is already laid out, and Vizzini is waiting for him. No implication is made that Vizzini expected the Battle of Wits. He just knew that Fezzik was beaten, probably having scouted out the Man in Black continuing his approach, and was expecting to have to make his own stand. By all accounts thinking a physical confrontation was in order, and not standing a chance in that regard, he responded by holding Buttercup's life hostage and looking for an opportunity to outhink his enemy.

Presumably, he was just peckish as well, and decided to take care of that, as well as paint a picture that he was a cool customer and not afraid in the least.

He was setting up a situation where he thought he could win.

It wasn't necessarily a battle of wits, but it was an environment where he has the upper hand because it is civilised and "peaceful", rather than a fight scene.

Vizzini was waiting for him.

Indeed, he had set out a little picnic spread. From the knapsack that he always carried, he had taken a small handkerchief and on it he had placed two wine goblets. In the center was a small leather wine holder and, beside it, some cheese and some apples. The spot could not have been lovelier: a high point of the mountain path with a splendid view all the way back to Florin Channel. Buttercup lay helpless beside the picnic, gagged and tied and blindfolded. Vizzini held his long knife against her white throat.

What we take from this is that he had prepared both the picinic scene and the hostage in preparation for Wesley's arrival. He was thinking on his feet about how to manage it, but with a knife at Buttercup's throat he clearly had the upper hand, so he could entice Wesley into a comfortable situation and try to spot a way to win.

I think the answer isn't so complicated. He is Arrogant. He is confident. I think it was his attempt to psych the man in black out is all. Think of it like this. "I see you coming, and it bothers me SO MUCH, that I am sitting down to a glass of wine". Never let them see you sweat right? "have you ever heard of plato. . . aristotle. . . socrates?". "Morons".

Vizzini was an educated man in a time when (presumably) education was rare. It had always worked for him before. He just had to buy a little time, he would kill the Princess if the man in black got too close, that was the game he was prepared for.

Not the answer you're looking for? Browse other questions tagged the-princess-bride or ask your own question.

25
Could Vizzini have won the battle of the wits?
14
Kill the dark one and the giant, but leave the third - which did he mean?
18
Did Inigo Montoya and the Dread Pirate Roberts use actual sword forms?
38
Why did Vizzini want to start a war?
53
Why did the six-fingered man leave the sword?