I lost a series books during a move and I'm thinking I might like to get them for my son.

They are about a teenage orphan who lives with a (sort of) wizard who's primarily known for his prize pig. There is a "bad guy" but he doesn't do much - he starts off the action in one by scaring the pig, and the boy has to chase after it. He goes on several such adventures, notably one to "find his true nature" that ends with him staring into a pool.

I suppose it could be the early books of The Fortress, but I'm pretty sure I read them in the 1980s, not 90s, and title seems wrong. And unlike the Wiki description, in the series I'm thinking of, there's no real magic to speak of - its "out there" but does not seem to be part of the action that I recall.

The Chronicles of Prydain 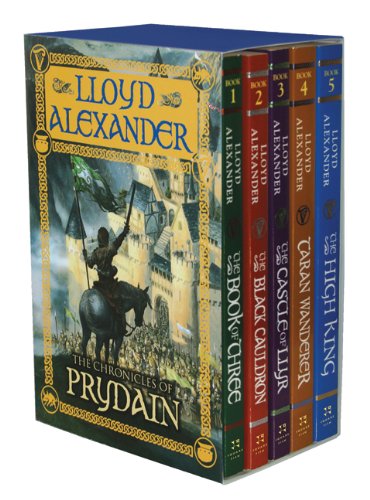 Most of what you describe comes from The Book of Three, the first book in the series.

The protagonist is Taran, an orphan.

His master is Dallben the Enchanter, a fairly standard wizard type:

Dallben, master of Caer Dallben, was three hundred and seventy-nine years old. His beard covered so much of his face he seemed always to be peering over a gray cloud. On the little farm, while Taran and Coll saw to the plowing, sowing, weeding, reaping, and all the other tasks of husbandry, Dallben undertook the meditating, an occupation so exhausting he could accomplish it only by lying down and closing his eyes. He meditated an hour and a half following breakfast and again later in the day. The clatter from the forge had roused him from his morning meditation; his robe hung askew over his boney knees.

The villain is the Horned King, who frightens Dallben’s “oracular pig” Hen Wen.

“All the better,” said Coll, “for it makes things that much easier. If you want to be something with a name attached to it, I can’t think of anything closer to hand. And it is not every lad who can be assistant keeper to an oracular pig. Indeed, she is the only oracular pig in Prydain, and the most valuable.”

“Valuable to Dallben,” Taran said. “She never tells me anything.”

Hen Wen usually slept until noon. Then, trotting daintily, despite her size, she would move to a shady comer of her enclosure and settle comfortably for the rest of the day. The white pig was continually grunting and chuckling to herself, and whenever she saw Taran, she would raise her wide, cheeky face so that he could scratch under her chin. But this time, she paid no attention to him. Wheezing and whistling, Hen Wen was digging furiously in the soft earth at the far side of the pen, burrowing so rapidly she would soon be out. Taran shouted at her, but the clods continued flying at a great rate. He swung himself over the fence. The oracular pig stopped and glanced around. As Taran approached the hole, already sizable, Hen Wen hurried to the opposite side of the pen and started a new excavation.

Taran was strong and long-legged, but, to his dismay, he saw that Hen Wen moved faster than he. As soon as he chased her from the second hole, she turned quickly on her short legs and made for the first. Both, by now, were big enough for her head and shoulders.

Taran frantically began scraping earth back into the burrow. Hen Wen dug faster than a badger, her hind legs planted firmly, her front legs plowing ahead. Taran despaired of stopping her. He scrambled back over the rails and jumped to the spot where Hen Wen was about to emerge, planning to seize her and hang on until Dallben and Coll arrived.

He underestimated Hen Wen’s speed and strength. In an explosion of dirt and pebbles, the pig burst from under the fence, heaving Taran into the air. He landed with the wind knocked out of him. Hen Wen raced across the field and into the woods. Taran followed. Ahead, the forest rose up dark and threatening. He took a breath and plunged after her.

5
Book that had a ring (or jewelry) that allowed wearer to see the future
9
Young adult fantasy book - boy finds wizard finger (kind of like a Horcrux)
2
Which story featured an orphan raised by a wizard who gets a sword from a skeleton on a throne?
-2
Book series where a main character can become invisible