Which book is set in a giant spaceship that can create life? [duplicate]

I read a book about a group of travellers who discover a ship that is 30km long (I am not sure about the length of the ship).

The ship belonged to a race who were researchers. The ship can create life from some dna samples in the ship, I remember a tyrannosaurus rex being created and killing one of the characters.

The main character was a bald man who likes cats.

You are likely remembering George RR Martin's Tuf Voyaging. The characters find an abandoned genetic engineering warship. The ship has extensive gene banks. One of the stories does indeed have a T-rex or similar creature in it. The protagonist Haviland Tuf is bald and likes cats.

The novel concerns the (mis)adventures of Haviland Tuf, an exceptionally tall, bald, very pale, overweight, phlegmatic, vegetarian, cat-loving but otherwise solitary space trader. Due to the venality and cutthroat tactics of the party chartering his one-man trading vessel, Tuf inadvertently becomes master of Ark, an ancient, 30-kilometer-long "seedship", a very powerful warship with advanced ecological engineering capabilities. Tuf travels the galaxy, offering his services to worlds with environmental problems, and sometimes imposing solutions of his own. 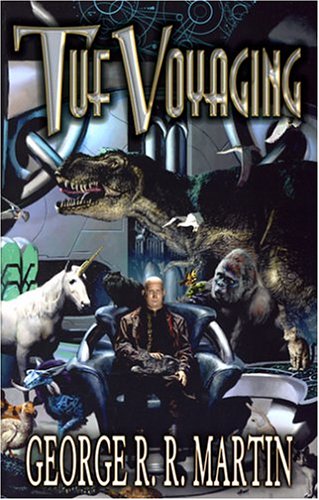 Possibly the 1980 Dragonstar series by David Bischoff and Thomas Monteleone?

Points that match are that it has a long spaceship habitat serving as a DNA terrarium of reptilian and other types of life. The scene with a T-Rex being created and killing someone occurs in both the first two books of the series. An excerpt from the first book is below along with the Covers of the books if any of those look familiar.

I don't remember the main character liking cats. At least not in the first book of the series.

An artificial Jurassic world spins through space, kilometers long and made to order, build to endure for an eternity. An enticing mystery for the humans of the Heinlein exploratory mission, it holds deadly secrets from the universe's savage past.

INSIDE THE MILES-LONG SPACESHIP IT WAS 160 MILLION YEARS AGO ...

Day after artificial day, outwitting the carnivorous saurians that had devoured their shipmates, the two survivors of the Heinlein expedition to the mysterious object known as Artifact One picked their way through the vast, horizonless jungle that filled the hull of the star-traveling terrerium.

They did what a man and a woman fighting together to survive usually do: They prayed for rescue. They searched for a way to escape. They fell in love

Then, from a rise in the forest, they saw a wall. And something on the wall saw them.

Atop a crumbling rampart stood a sentry, weapon grasped in its four-fingered hand, partly clothed ... its snout instintively twitching at the scent of the man and woman walking toward its city.

16
Looking for a story about a giant lost ecological ship, and the quirky guy who became its captain
13
80's (or earlier) sci-fi book, space pirates/thieves encounter a spider-like alien with ultrathin legs able to slice through the members of the crew

5
can anyone tell me the name of the sci-fi book series with a concorde like spaceship on the cover?
6
What's the title of a book about a startup which writes bioware for eyes?
7
Identify a book set on a spaceship orbiting a black hole?
3
Webcomic starring a pair of cats who move into a haunted mansion - R.O.B. the robot and spirits
19
Short story about a spaceship that meets an alien spaceship made of anti-matter
4
Anime where people live in a virtual reality world to escape from reality
27
Book about a physicist who discovers how to create universes with different laws of physics