I've been looking for a Scifi movie from the I think the 70s I saw as a kid. It had astronauts on the surface of a fairly barren moon looking like planet.

On the planet near where they land is an large 8ft fall metallic ball. It looked like it was made of foil. One of the astronauts gets near it and it opens like a pacman on it's side. He walks in. I don't remember what happened inside. I also don't remember it being a particularly good movie but I haven't been able to find it. Any ideas?

Movies it's not: It's not Phantasm. That has a sphere but it's tiny. It's also not Sphere as that came out much later. I don't remember the movie being horror either. It's also not Mission Mars (1986)

The movie I'm looking for looks like it was shot on the moon. Everything is gray, or metallic. The astronauts are not in colorful outfits. There are not big mountain ranges or valleys that I remember. No vegetation.

There is a possibility that you remember an Italian movie from about 1967 based on the Perry Rhodan stories called Mission Stardust. 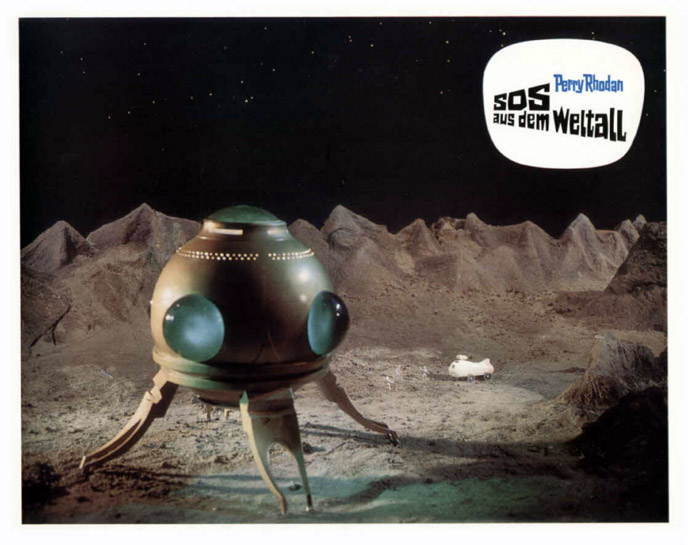 Plot summary from this review (with paragraph breaks inserted):

A secretive mission to the moon is planned, to check out some unusual metal readings. Major. Perry Rhodan will command, aided by Capt. Mike Bull, Captain Flipper and Dr. Manoli. When they're about to land on the moon, something goes awry and they land far off course. Communications are jammed, so Perry and Mike explore in the Rover. Eventually, they discover a spherical alien craft.

A robot ushers them in. They meet two aliens from the planet Arkon -- an old scientist named Crest and the beautiful platinum blonde, Thora. They were on a mission to find a new, young race to interbreed with when they had mechanical trouble. Perry and Thora exchange insults and boasts over superior and inferior beings. Crest is sick with Leukemia. Perry knows an earth doctor with a cure for it.

They travel to earth in a miniature version of the sphere ship. They land in east Africa to find Dr. Haggard, but all this is known to a crime boss named Arkin who is arranging to steal the alien ship. Perry and Mike make their way through shady characters to Dr. Haggard and bring him back to the ship. Perry stays behind to stop Arkin's men, but gets captured. All the while, a bombastic army general is obsessed with arresting the aliens, but is prevented by Thora's force field. It turns out that Captain Flipper is one of Arkin's men, so Arkin knows all. Dr. Haggard and his nurses (blonde and shapely, naturally) turn out to be fakes employed by Arkin too.

They try to hijack the ship, but Thora releases her robots who zap all the baddies into oblivion. Flipper escapes with Thora as hostage. She is taken to Larkin's secret island base. He threatens her menacingly. Flipper plays with her gadgets, turning on her locator beacon. Perry, Mike and Crest arrive in the pod ship. Mike and Perry burst into Arkin's lair. They free Thora and the real Dr. Haggard. Arkin escapes. Thora blows up the whole island out of angry spite. Arkin, however, somehow followed them aboard and hold them at gunpoint. Perry and Mike move in slowly on Arkin, saying that he can get them all. Arkin gets cowardly in final moments, then falls out an air lock into the cold void of space. The pod is en route to the moon.

Back aboard the mother ship, Crest feels all better since the real Dr. Haggard cured his leukemia. Crest would like a treaty between their races, for interbreeding. Mike is keen on being a stud, but Perry and Thora are already making out heavily in the next room. The 'experiment' has already begun. The End.

Mission Mars(1968), starring Nick Adams and Darren McGaven. It has the white sphere that opens like pac-man.