Children's/YA book where twins are separated at birth in order to save one from eugenics empire?

The story takes place within an interstellar empire whose most significant feature is its eugenics program. Individual freedom has been largely removed. People do not marry, and instead are selected by the state and put together in order to breed. They are selected based on their compatibility and (possibly?) based on the needs that the state has for this particular child (do they need an extra fighter pilot, scientist, laborer, etc.). I believe they are given some period of time to live together on a vacation of sorts for the purpose of procreating.

A particular couple (best of the best) are put together and fall in love. They decide that they don't want to just give up their child. They end up having twins and seize this chance to save at least one of their children from the empire's control. One goes to the empire, the other is sent away somewhere.

Flash forward 20-ish years (this is where the book actually began) and we follow the life of the son given to the empire. He is an officer/space pilot with lots of upward mobility. He has access to some sort of high-tech power gauntlet (I'm a little fuzzy on this) that can shoot lasers or has super strength or something like that. This is restricted to only soldiers of high rank. He is shot down or captured by a group rebelling from the empire, and this is where he meets his brother for the first time. At some point they switch places (I'm not sure if this was willingly on empire-brother's side). The rebel-brother is caught when they realize he doesn't have the same tattoo/brand on his shoulder that all other empire subjects have.

I'm not certain what happens from here, as I was not able to finish!

I believe one of the brothers' names started with a 'Z.'

I read this in the late '90s/early 2000s, however, these were given to me by my sister who had probably had them since the early '90s.

I had two books (out of three I believe) in this particular story. The versions I had were part of a series of children's/YA illustrated books. The series was similar to Great Illustrated Classics or Children's Illustrated Classics. Books from different genres adapted for children. This story was probably adapted from something else, but I can't be sure on that point. If I remember correctly, the books in this collection were all approximately 4 inches x 4 inches, and she would purchase on trips to the grocery store. It's possible that it was a Christian book series, but I can't be sure about that. I think there was a book in this series about Corrie Ten Boom.

The books are the Zaanan series by Al Bohl. The series is part of the Young Reader's Christian Library published by Barbour Publishing.

There appear to be four books: 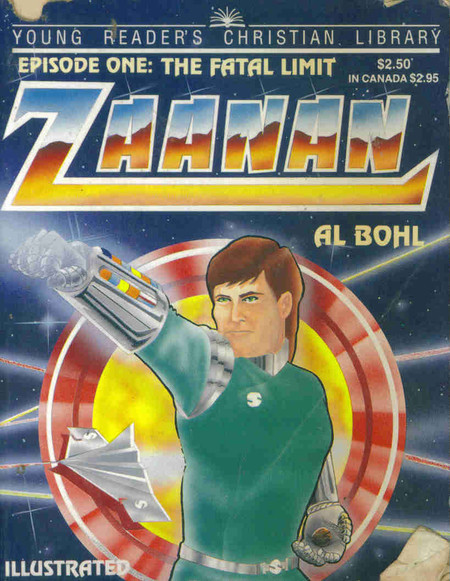 In the picture above, you can see the "power gauntlet" that was referred to in the question. These are actually called "power arms" as can be seen from these very limited quotes on Google Books:

Tis-year! fired Zaanan's power arm. It was a direct hit. The man jerked and fell off. Without a driver, the tubeship slowed to a hover.

"... fool their camera guards with the cloaking devices on our power arms."

Malcom was very excited as he arrived at the Center for Genetic Science. The male and female selected to have a baby were checked out on ...

It does not appear that these were adapted from more "adult" works, but were rather written for this collection. Al Bohl's website mentions that he is writing another Zaanan book:

Al continues to write and illustrate. He is writing a new Zaanan novel entitled “Zaanan and the Mermen of Immersia”.

As to my memories of the dimensions of these books, Amazon says:

And I was correct about the presence of Corrie Ten Boom in the same collection.

Props to the referenced sister who grew up to be a librarian and found the name of the books.

The books being asked about are part of the Zaanan series by me, Al Bohl.

My name is Al Bohl. I wrote and illustrated the four Zaanan books which are presently available through Amazon.com.
The idea came for Zaanan because I wanted to tell an adventure story for young readers. It is not taken from any other source. There are two overarching concepts that I hoped to convey. One is that should Christ tarry, Christianity will be relevant far into the future. Secondly, as the book Haggai says, "consider your ways." I took common issues and projected them into the future. If we don't consider what were doing and why we will reap what is sown.
I am currently writing episode Five "Mermen of Immersia." The fourth book ended with a plug for this story but the publisher dropped the series. I hope to have it ready by the Fall of 2017. It won't have as many illustrations.

Not the answer you're looking for? Browse other questions tagged story-identification illustrated-story eugenics or ask your own question.