How did Daenerys know about the "Hand of the King" pin?

In the season finale of season 6 of Game of Thrones

Daenerys presents Tyrion with a "Hand of the Queen" pin.

She says something along the lines of "I hope I got the details right."

It is unlikely that she asked Tyrion himself about it as he seems surprised to be receiving it. It is possible that she asked Jorah about it but we don't really see them alone and they likely have not spoken off screen since maybe half way through season 5. Even if she did ask him about it, it seems unlikely that Jorah would have ever even seen the "Hand of the King" pin. 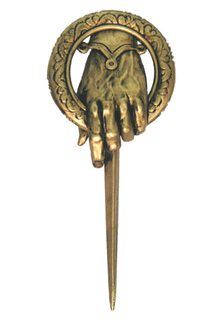 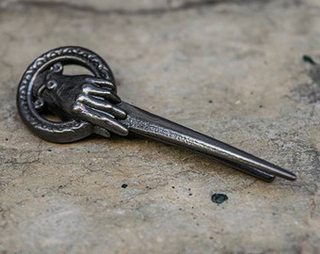 Are we supposed to believe that she asked Varys before he left?

First of all, this is a show only event. It has never happened in the books as Books ended when the Dothraki found Daenerys. Later, in absence of the Queen, Ser Barristan Selmy assumed the office of Hand of the King to govern the realm. From ADWD, Chapter 59:

Though he had assumed the title of Hand, Ser Barristan would not presume to hold court in the queen's absence, nor would he permit Skahaz mo Kandaq to do such.

However since you have added the books tag, Books do refer to how she got her knowledge of Westeros. From AGOT, Chapter 46:

My mother died giving me birth, and my father and my brother Rhaegar even before that. I would never have known so much as their names if Viserys had not been there to tell me. He was the only one left. The only one. He is all I have

She had never seen the Seven Kingdoms either, no more than Drogo, yet she felt as though she knew them from all the tales her brother had told her. Viserys had promised her a thousand times that he would take her back one day, but he was dead now and his promises had died with him.

Viserys had even told her about the Tourneys. From ADWD Daenerys V:

"One would be enough if he were as true as you." The day might come soon when she would have need of every knight. "Will they joust for me? I should like that." Viserys had told her stories of the tourneys he had witnessed in the Seven Kingdoms, but Dany had never seen a joust herself.

Also from AGOT, Daenerys I:

Yet sometimes Dany would picture the way it had been, so often had her brother told her the stories. The midnight flight to Dragonstone, moonlight shimmering on the ship's black sails.

Viserys also told her about the Targaryen custom of incest. From AGOT, Daenerys I:

She had always assumed that she would wed Viserys when she came of age. For centuries the Targaryens had married brother to sister, since Aegon the Conqueror had taken his sisters to bride. The line must be kept pure, Viserys had told her a thousand times; theirs was the kingsblood, the golden blood of old Valyria, the blood of the dragon.

He also told her about History of House Targaryen's dragons. From AGOT, Daenerys III:

Viserys had told her that the last Targaryen dragons had died no more than a century and a half ago, during the reign of Aegon III, who was called the Dragonbane.

Also from ADWD, Daenerys II, he told her about the Dance of the Dragons:

Viserys had told her all the tales when she was little. He loved to talk of dragons. She knew how Harrenhal had fallen. She knew about the Field of Fire and the Dance of the Dragons. One of her forebears, the third Aegon, had seen his own mother devoured by his uncle's dragon. And there were songs beyond count of villages and kingdoms that lived in dread of dragons till some brave dragonslayer rescued them.

It was also Viserys, whose knowledge had saved Daenerys' dragons from starvation in ACOK, Daenerys I:

Or rather, tried to feed them, for the dragons would not eat. They would hiss and spit at each bloody morsel of horsemeat, steam rising from their nostrils, yet they would not take the food . . . until Dany recalled something Viserys had told her when they were children.

Only dragons and men eat cooked meat, he had said.

He also told her about the Throne room and Dragon skulls that adorned the walls. From ASOS, Daenerys I:

"Viserys talked of those skulls," said Dany. "The Usurper took them down and hid them away. He could not bear them looking down on him upon his stolen throne."

He also told her about Tragedy of Summerhall. From ASOS, Daenerys V:

Viserys had spoken of Rhaegar's birth only once. Perhaps the tale saddened him too much. "It was the shadow of Summerhall that haunted him, was it not?"

He also told her about theology and faith. From ASOS, Daenerys VI:

Westeros had seven gods at least, though Viserys had told her that some septons said the seven were only aspects of a single god, seven facets of a single crystal.

So here we see, Daenerys knows all she knows thanks to Viserys. To sum it up, following are the subjects Viserys told her about:

So if this event does happen in the books, It would most likely be Viserys who would have told her about the pin and the office of Hand of the King.

There is no indication in the show that who told her about the office and its pin.

Daenerys: I, um... I had something made for you. I'm not sure if it's right. Tyrion Lannister, I name you Hand of the Queen.

Since she wasn't sure about the exact appearance having never seen the pin personally but yet had it made, that implies she did so with help of verbal description she may have heard from someone. Following are the candidates who may have told her about the pin custom:

The most plausible one of them is Viserys since he was the one who told Daenerys everything she knew.

"I am Daenerys Stormborn of the House Targaryen, of the blood of Old Valyria. Valyrian is my mother tongue."

With her brother, Dænerys had a classical education under Sir Willem Darry and other Targaryen loyalists at the House of the Red Door, preparing her for a future position as trueborn Westerosi royalty (as part of the Dornish conspiracy to retake the Iron Throne).

Furthermore, after the events involving Viserys and Drogo, she started seeing herself as the rightful heir to the Throne, and given her personality, we can safely assume she would prepare herself as well as she could—in many scenes, we see she's eager to learn everything she can from Barristan and others. There's all the reasons to suppose she must be familiar with Westerosi court protocol, heraldry and symbolism—and have the motivation to ask her advisers about whatever's lacking from books.

Recall, for example, that the Hand of the King tradition was started by her great ancestor, Aegon I Targaryen.

22
How did Varys become a Eunuch?
11
Does Westeros know that Daenerys is coming?
28
How is the murder attempt consistent with Varys' plan?
22
Did Varys trust Tyrion after the events of A Storm Of Swords?
10
Who were the wise master of Yunkai's "powerful friends"?
4
Why didn't the North (or anyone really) declare for Daenerys?
14
Is Sansa and Tyrion's marriage still legitimate?
2
To what degree does Daenerys admit her house had to be relieved of the Iron Throne due to her father the Mad King?
8
Why does Tywin Lannister send Tyrion to King's Landing to be Hand of the King instead of himself?