After the revelation in Avatar The Legend of Korra we know that:

Benders got the abilities to use different elements from different Lion Turtles.

I was wondering: what kind of elemental Lion Turtle did Aang encounter?

One easy guess would be that it was Water (since he found it on the sea), but in the show and different pictures there seems to be subtle differences between the turtles (coloration, morphology, etc). I'd like to know if there is any info (canon or word of god).

Lion Turtles have different markings on their forehead to distinguish between different elements:

Lion turtles associated with air have a more intricate swirling pattern, with two swirls curling outward and a swirl in the center

So all we have to do is take a look at the forehead of the Lion Turtle Aang was talking to: 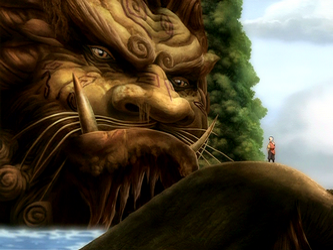 And we can see the two swirls curling inward, forming a shape similar to a heart, meaning that this Lion Turtle is one that, back in the day, granted humans the power of fire. This makes sense, as the crew were on Ember Island in the Fire Nation when the Lion Turtle first appeared.

I personally like to believe that this is the same Lion Turtle that first gave Wan the power of fire all those years ago.

12
How can Wan's history be reconciled with legend?
8
Were the lion-turtles energybending?
5
Could Vaatu's release create a second Avatar?
15
In the Avatar world, what exactly are they bending?
11
How did Toph know that Korra was the Avatar?
3
What are all the types of bending?
3
Could a Lion Turtle give Sokka bending?
2
How come Korra could bend three elements so young before training?
8
How were people first born with bending abilities?