Fantasy anime. Main protagonist is the son of a blacksmith

There was an anime with a male protagonist who is the (adopted?) son of a blacksmith. His powers came from a jewel left by his mother.

The girl of his interests needs to travel the world looking for towers(?) to prevent a certain group of bad people of regaining their strength. At the start of the quest she tries to leave the boy but their town was attacked. His father gives him a sword.

I think the start of the anime is that they are sleeping in the grass field. The boy gives the girl a necklace (his first work as a blacksmith).

At one point the girl was brought to a tower (by some priests) for some kind of ritual and she needs to wear a golden necklace, so she take off the necklace given to him by the boy, then the bad guys attack and one mercenary and the boy saves her.

I'll bet a muffin you are thinking of the anime OAV version of Tales of Symphonia, a videogame in the "Tales Of" series (image of the cover and brief plot description note courtesy of Wikipedia). 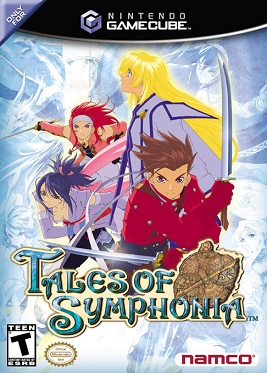 From Wikipedia: Lloyd Irving and his friend, Genis Sage accompany the chosen, Colette Brunel and her guardians, Raine Sage and Kratos Aurion on her journey of world regeneration. The purpose of the journey is to replenish Sylvarant with mana, a necessary energy to their survival. The path of the journey consists of five temples which must be unsealed by Colette.

Lloyd is living with a dwarf who is indeed a blacksmith and has a gem, called an ExSphere mounted on a cast he wears on his hand. The gem was left him by his mother and has special powers which nature I won't describe to avoid spoilers. "It boost the strength of the user and let him draw from his inner skill" as Lloyd says at the beginning of the game will be a sufficient description.

The necklace you are remembering is probably the one Lloyd gives Colette near the start of the game (and of the OAV too). Since Colette is going to depart for her journey soon after her birthday, Lloyd quickly finishes the necklace he was going to give her as a present and hurries to her home... only to find out she already left. This, alongside with something happened the day before will trigger a chain of event that will have him set on a journey to catch up with the others and together discover some unexpected truth on this "world regeneration".

Still not this one, it is the girl that needs to travel, in fact if I remember correctly the girl tries to leave the boy when she started her journey, but their town was attack, he's father (the blacksmith) gave him a sword before he left to follow the girl (also i think that the blacksmith is not he's real father)

It is not like she really "wanted", more along the lines of "she had to", but yes, as I said Colette leaves the city soon before Lloyd comes back with the finished necklace. The city is attacked soon after, and the others town peoples give the blame to Lloyd because of something happened the day before. This, alongside with the even more important "need my Colette" is the excuse for the game/anime to have him start his race to catch up with Colette party (which, I may say, has gone quite far given they should have less than a day of advantage :P).

Still not the one, one of the scenes I remember is that the girl was brought to a tower by a number of priest for some kind of ritual and she needs to wear a golden necklace, so she take off the necklace given to him by the boy, then the bad guys attack and one mercenary and the boy saves her.

You got something mixed up there, I believe, since the game story is a little different and I don't seem to recall this point begin edited in the anime version. Colette is indeed "brought to a temple" by some priest for a ritual where she is officially declared as the "chosen" and given a pendant, but this happens before Lloyd tries to give her his present, so she never removes Lloyd pendant to wear the other one at this point. The other part about the attack and Lloyd coming to save her alongside a mercenary was right. As a side notice you also forgot poor Genis Sage, Lloyd other friend who was also present and probably will be pretty saddened by this lack of consideration.

Could this be "Deltora Quest"?

The Shadow Lord, an evil sorcerer and The Lord of Shadows which comes from The Shadowlands, has taken over Deltora by destroying a magical object known as The Belt of Deltora, which is Deltora's only protection against him. Throughout the course of the anime, Lief, Barda and Jasmine travel around the land of Deltora to return the seven gem of the initials of which combine to form DELTORA, hence the name Deltora Quest, to the belt and save the land. Their first destination is the Forests of Silence.

Could this be "Tales from Earthsea"?

Ged, the rebellious son of a blacksmith, learns that his destiny is to become a great sorcerer ever known in Earthsea, a mystical world of hundreds of islands.

5
Anime movie about a boy in a ghost town
4
Anime show/movie about a villager blond boy who live in an old day town with weird creatures, meets a red-haired girl coming out of a computer
7
Supernatural child captured by cultists
14
Book trilogy where adults walk towards towers involuntarily at a certain age
6
Isekai manga - protagonist repeatedly re-enters the fantasy world, time passes more quickly there
6
Fantasy manga about a girl who travels back in time to old Japan
2
Anime about a girl that likes listening to the chiming sounds of different rocks, travels to another world