OK, this is going to be not up to my usual standards for story-ID questions, but people here are geniuses at finding things, so maybe it will be solved anyway.

I read this book some time in the early to mid 2000s (before 2006). It may have been the second book in a series, since I think the protagonist had already discovered the secrets of his ancestry in a tale I didn't actually read. I'm not sure, but I'd guess it was written, published, and set in Britain.

The main character is a boy (possibly named Joshua, but don't take my word for that) whose father is some kind of significant and probably magical figure - I want to say Lucifer, but a "good guy" version of Lucifer (this was probably expanded on in the first book of the series).

Somehow he ends up in Elizabethan England. I don't remember how the time travel happened, but as far as I recall he didn't seem to be very fazed by it (more evidence for this being the second book in the series - he was already used to weird events). He finds shelter with John Dee, and lives in his house for most of the book. Edward Kelley also features prominently: I believe he's being hunted by the law, and hides in some sort of crypt or secret refuge beneath Dee's house. Scrying also plays a major role in the story (and this precise word is used a lot) - it's a magical ability possessed by Kelley, and probably the reason he's being hunted.

I'm afraid I don't really remember anything about the plot, or how the story begins or ends. I'm hoping the above details will be enough to identify it uniquely, and I'm pretty sure I'll know it if I see it.

Swept back to 1590s London and placed in the care of Dr Dee, the Queen's Conjuror, mathematician, astrologer, and occasional dabbler in the occult, Joshua soon discovers that his friend Dido is in mortal danger.

With Dee's aid Joshua must reach her before Leirtod does and death is dealt. Dee however is surrounded by his own demons: spies set up to burn him for his Catholic sympathies. 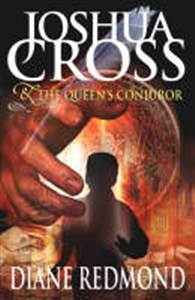 15
Fantasy novel about an orphan raised by a wizard; makes his own journey after an attack on the wizard’s house
18
Magic is based on words of power, which series?
4
Book or Series name/author-the original book cover has a wizard standing before a door with runes on it
5
Horror story about a shack full of notorious serial killers' possesions
17
First book of a series: boy disappears from his life, becomes time travelling agent
7
Recent novel, a teen in Australia surviving after comet/meteor impact devastates the world