What is the green substance on C3PO when Jabba the Hutt hits him while bargaining with Boushh?

In Return of the Jedi, Boushh (Princess Leia) brings Chewbacca as a bounty to trade for the life of Han Solo.

C3PO is acting as the translator for Jabba. When Boushh is making demands for more money, after C3PO tell Jabba how much, Jabba hits C3PO with the back of his arm. When he returns he has a green substance on his chest which obviously came from Jabba's arm. 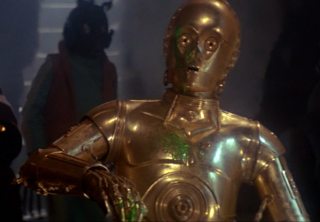 What was this green goo supposed to be?

I really can't see it being blood, as Jabba was not injured as far as I can see. So is there any canon information on what the green substance was?

It appears to be whatever Jabba was drinking. He certainly seems to spill plenty of it in the following scene.

Belowdecks, in a dark and nasty hold, Jabba is in high spirits.

Today it will be great fun to watch his enemies plead for their lives before being dropped into the Sarlacc’s gaping mouth. And tomorrow the story of his triumph will spread across the planet…and then the galaxy.

Drooling with the pleasure of it all, he gulps down a glassful of thick, green liquid. It’s strong stuff and half this much would kill a lesser creature, but it merely intoxicates Jabba.

Star Wars: Return of the Jedi - Beware the Power of the Dark Side!

The script is silent on it other than C3-PO being "disheveled".

Jabba immediately flies into a rage, knocking the golden droid off the raised throne into a clattering heap on the floor. Boushh adjusts his weapon as Jabba raves in Huttese and Threepio struggles back onto the throne. The disheveled droid tries to compose himself.

The Official Novelisation doesn't even refer to Jabba's arm but rather his tail.

Threepio quietly translated for Jabba, who immediately became enraged and knocked the golden droid off the raised throne with a sweep of his massive tail. Threepio clattered in a heap on the floor, where he rested momentarily, uncertain of the correct protocol in this situation.

So, we don't know but apparently it's not from Jabba's arm.

Here's the image of C3-PO just after he's hit. There's nothing on his chest or face. Note that he wasn't hit on the face but when he get back up he does have green goo on it.

It seems likely that, whatever it was, he picked it up when he landed on the floor.

Here he can be seen with goo in three places 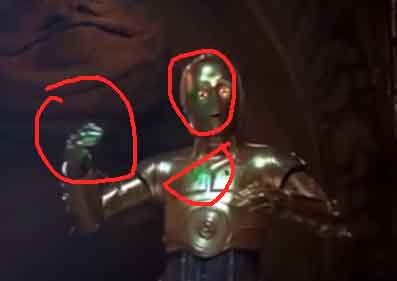 My guess is: When Jabba reached into that bowl of fluid to grab that creature he then ate, there was some slime - possibly algae - in the bowl, and it got on Jabba's hand, and from there onto C3P0.

[I -think- Jabba ate the creature before that negotiation; but if not, there's no reason not to conjecture that he ate another one earlier]

Not the answer you're looking for? Browse other questions tagged star-wars return-of-the-jedi c-3po or ask your own question.

39
What exactly was the nature of the relationship between Jabba the Hutt and Princess Leia?
7
What would have happened if Luke hadn't brought his weapon into the cave with him?
2
What could the Jedi have done with Anakin other than train him?
28
Did the 501st Legion know what Anakin had become when they attacked the Jedi Temple with him?