How do Westworld guests and hosts travel into the "park"?

Westworld premiered on HBO two weeks ago (as of the writing of this question, we've only seen Season 1, Episodes 1 and 2).

One of the things they haven't shown us yet (I hope will be revealed soon) is how objects in the physical world (host robots, guest humans, even inanimate items like cowboy hats and guns) get "transported" into the park ("Westworld").

I know the guests ride trains and then somehow they're magically "in" the park, but that's obviously not how they really get transported (it wouldn't be believable or even remotely realistic).

There was a Michael Crichton book as well as a movie in 1973 surrounding the same story line. Anybody know how you actually travel or get transported in/out of the parks?

Where, exactly, is this place? How do paying customers catch the train? It's a nice touch that customers arrive in town along with hosts, but it's also confusing. It's a bit more clear in Michael Crichton's original flick, in which visitors travel in together from a real-world location via hovercraft and arrive at a futuristic-looking greeting area at an adult amusement park called Delos, where they are outfitted and then shipped off to one of three themed subsections: West World, Medieval World, or Roman World. Will the HBO series pull back to reveal the functional world outside the park?

As per CBredlow's comment, some of the mystery has been answered in the second episode. We know how paying customers catch the train.

We do know how paying customers catch the train, as in episode 2 we see people walk down a hall after they get dressed and cross a threshold into the bar car of the train into the town.

Just to clear up a few questions raised in the comments, the park is not virtual reality, but rather a physical facility.

Nolan told Entertainment Weekly all about the logistics of the Delos' maintenance facility.

"So the idea is that most of the facilities are underground," Nolan told EW. "We sort of pictured a 100-story building skyscraper that goes down instead of up, which for us was also a visual metaphor for the age of the park. When you’re in the older portion of it [far below the surface], the cold storage, it has been clearly repurposed from something that used to be more grand."

Based on the maps available on the Westworld Website, guests arrive by high-speed subterranean monorail, disembark at the Mesa Gold facility's "Arrivals Monorail Terminal" (situated a few miles from the centre of the park), then catch the olde-fashioned steam train which takes them the last few miles from the facility to the town of Sweetwater.

I've highlighted the probable route of the monorail, but obviously if it's underground it could literally come from any direction, including directly below the conventional train track. 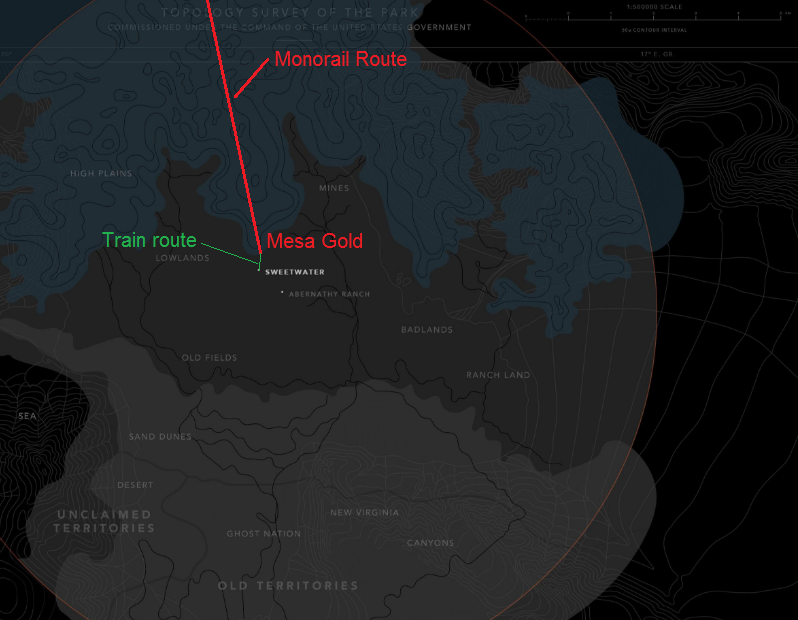 Based on the first two episodes, we know:

2
Where in the world is Westworld's park?

19
How does gunplay work in Westworld?
3
How much does it cost to run Westworld?
17
How does Westworld handle guest-on-guest violence?
11
How are the Westworld hosts powered?
7
How long are Westworld cycles?
7
In Westworld, why wouldn't they use an EMP (Electro Magnetic Pulse) device to knock out all the hosts in the park?
7
Why would hosts in the Westworld control center not know this about themselves?
10
What happens if two guests in WestWorld want to do the same thing during their stay?