What are Imperial officers wearing here?

Most, if not all Imperial officers are dressed in variants of the same uniform:

As you can observe above, there are two main accessories decorating the uniform on the chest: the rank insignia and some white stick-like thing.

For the longest time, I always assumed it's a pen because that's what it looks like to me: a metal pen slotted into a pocket like you would in real life. I was still a teen ten years ago, ok.

Only now, when I looked back (after watching the latest Rogue One trailer) did I realise what is wrong with that assumption: nobody has ever been seen writing on paper in Star Wars.

So there's no sense in supposing that is a pen. So what exactly is it? Or is it actually a pen indeed?

According to the visual dictionary, those 'pens' are actually code cylinders. I'd assume by that they mean it's the authorization codes for that particular officer. (Kind of like a badge/PIN/password combo that you see at secure facilities.)

These indicate the rank and other identifying information of Imperial officers:

Tarkin squinted at the hologram that appeared alongside the holopresence of the facility administrator. Dressed in an Imperial uniform, the man was tall and lean, with thick red hair and a raised scar on his left cheek that ran from the corner of a full mouth to a bionic eye not unlike the one worn by Vice Admiral Screed.

“His code cylinder identified him as Commander LaSal.”

Code cylinders also allow officers authorization for various activities. For example, some opponents of the Empire used them to obtain fuel:

“A point worth considering,” Tarkin said. “In addition, they’ve betrayed themselves in other ways. Not only are they conversant with the Carrion Spike’s instruments, they are also well acquainted with Imperial procedure. The self-styled commander looks every bit an officer, and he used code cylinders to requisition the fuel cells.” He looked up at Vader. “Some of the Empire’s own?”

It seems that the number of code cylinders increased with one’s rank. Tarkin, as Grand Moff, had four:

To complement his new station, he designed and had made a gray-green uniform whose thick-belted, round-collared tunic featured four code cylinders and a rank plaque of twelve multicolored squares, six blue over trios of red and gold. In all dealings with the Emperor he was referred to as Grand Moff, but for ordinary interactions with military personnel he retained the honorific Governor.

On the other hand, Admiral Ozzel had three: 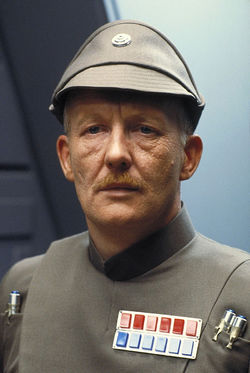 All those random officers in the picture given in the question appear to have one or two cylinders.

They're called "Code Cylinders" or sometimes "Rank Cylinders". They're essentially small encryption devices, used to grant access to secure areas and files. They're also used as markers of rank, especially by high-ranking officers, as carrying more cylinders indicated that one had access to more secure data and areas than someone with fewer.

They're not just Imperial devices, either - you may notice in Episode VII that Han is wearing three cylinders on the breast of his jacket as well. This is probably because, for all his rogueish lifestyle, he's still a General. The interesting question is whether they were for Republican use...or Resistance.

Not the answer you're looking for? Browse other questions tagged star-wars costume object-identification or ask your own question.

33
What do the Imperial officer rank badges mean?