Does the Flash have use for a computer/programming and if so how does he deal with their slowness?

I have a question that no amount of Google-Fu will help. Searching for the flash, computers and programming only yields results in the computing realm.

Given the following image:

Based on his raw speed, I believe that he can process information faster than the fastest computer ever could. I don't have calculations on how the Flash's speed correlates to clock speed, but it is hard to believe that he would need a computer.

Would the Flash ever need a computer/program or find one useful and would he be able to tolerate how slow these devices are?

Additionally, is this documented in any of the comics? 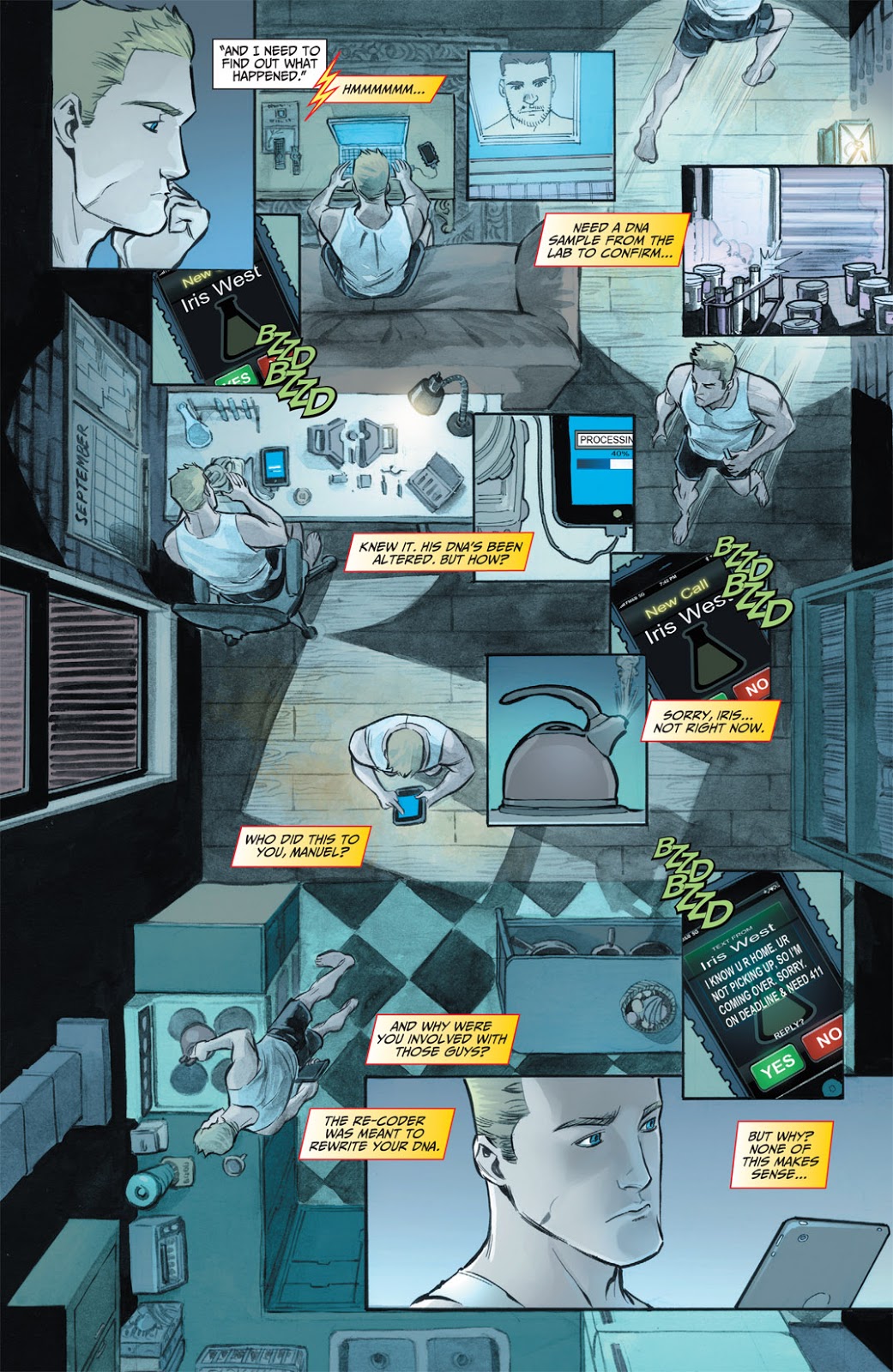 In Flash #1 (2011) we see Barry using a number of computers and tablets to reference a variety of scientific databases while investigating a case. He doesn't seem disturbed by their slowness.

There is one reason no one has addressed which is is the most important aspect of dealing with computers:

In his secret identity as the Flash, he has been seen for decades making use of computer technology as a part of the Justice League with no serious difficulties.

Most computer technology is likely to be very slow when any Speed-Forced enhanced speedster is operating at a heightened cognitive ability, but since the Flash can change his awareness of the passage of time, he can simply reduce his expectations and his speed of cognition to make them bearable if he is forced to.

We have watched the Flash learn the skills required to repair an entire building destroyed in a fire, from scratch, including all of the construction skills, learning to read construction plans, and using his abilities to completely reconstruct a building damaged in a fire in less than an hour. 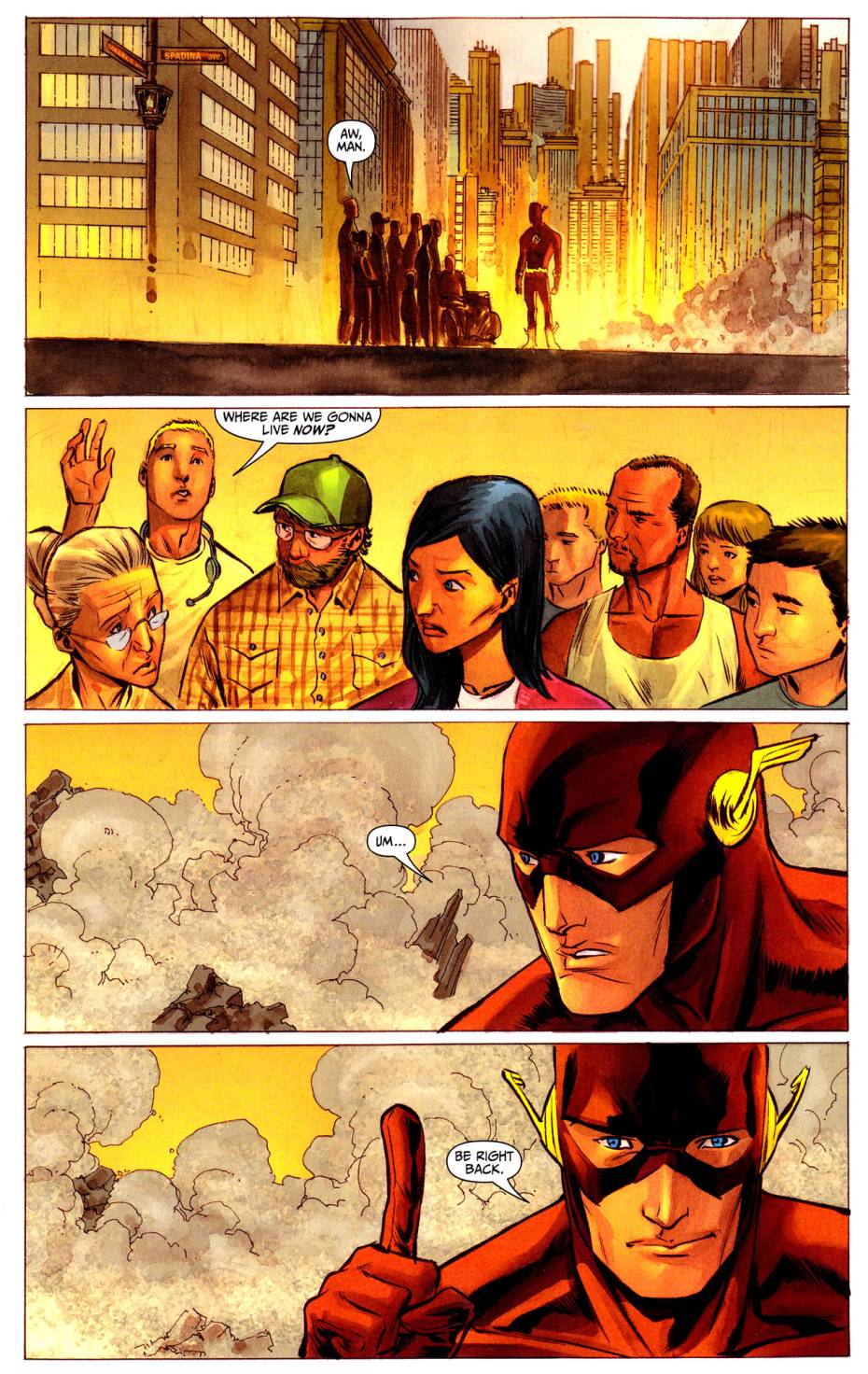 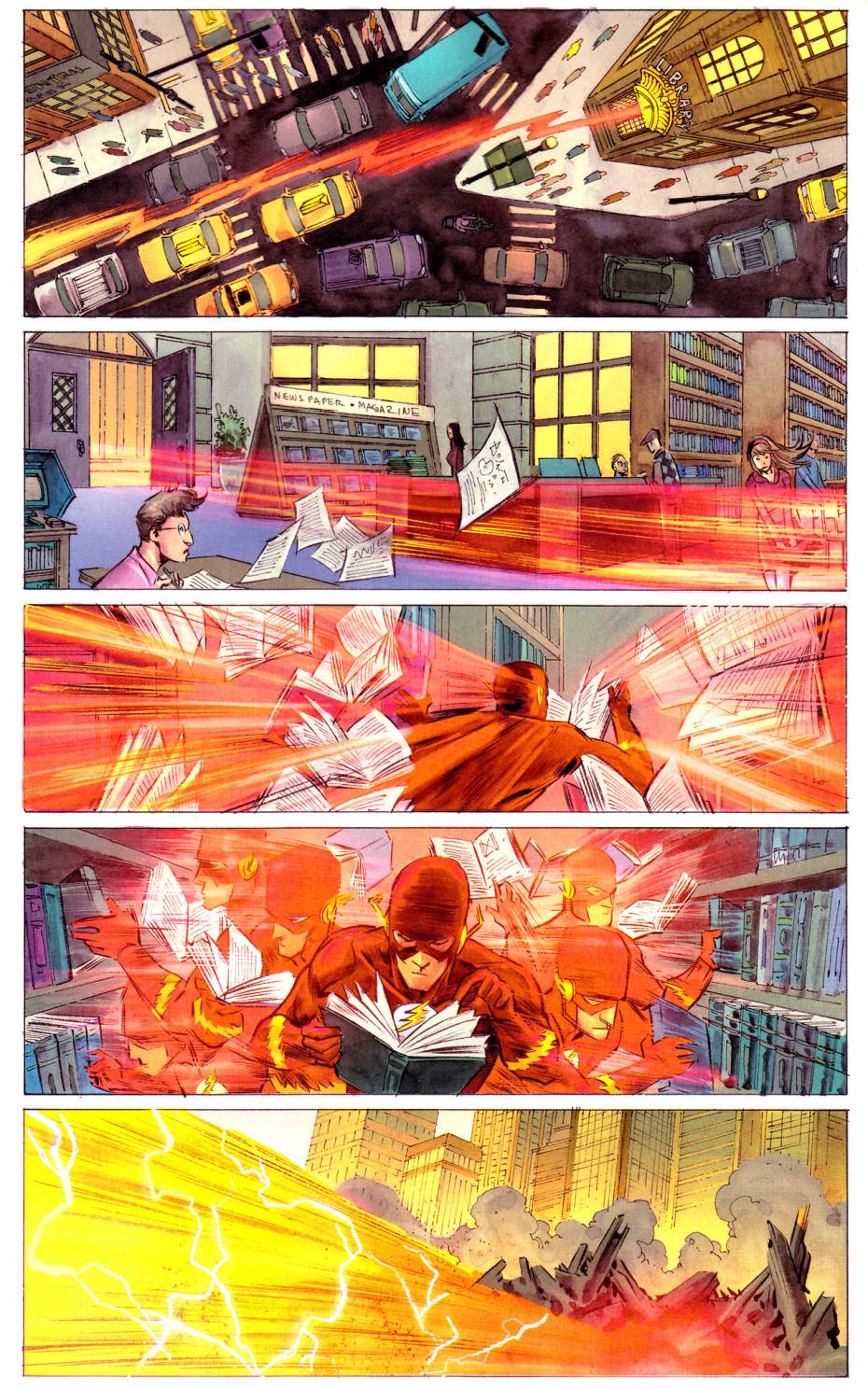 As far as that image goes: The image is canon but invalidates decades of Flash's appearances and the most common appearances of his powers. It depicts an extreme which is almost never seen in comics and should be treated as the exception, not the rule. If it was, there would NEVER be any Flash comics if he were operating at that level for very long.

I don't exactly understand what you're asking, but in one scene of Injustice: Gods Among Us (Year 1, Chapter 26), Flash asks the Watchtower computer to display its knowledge on chess at Flash speed: 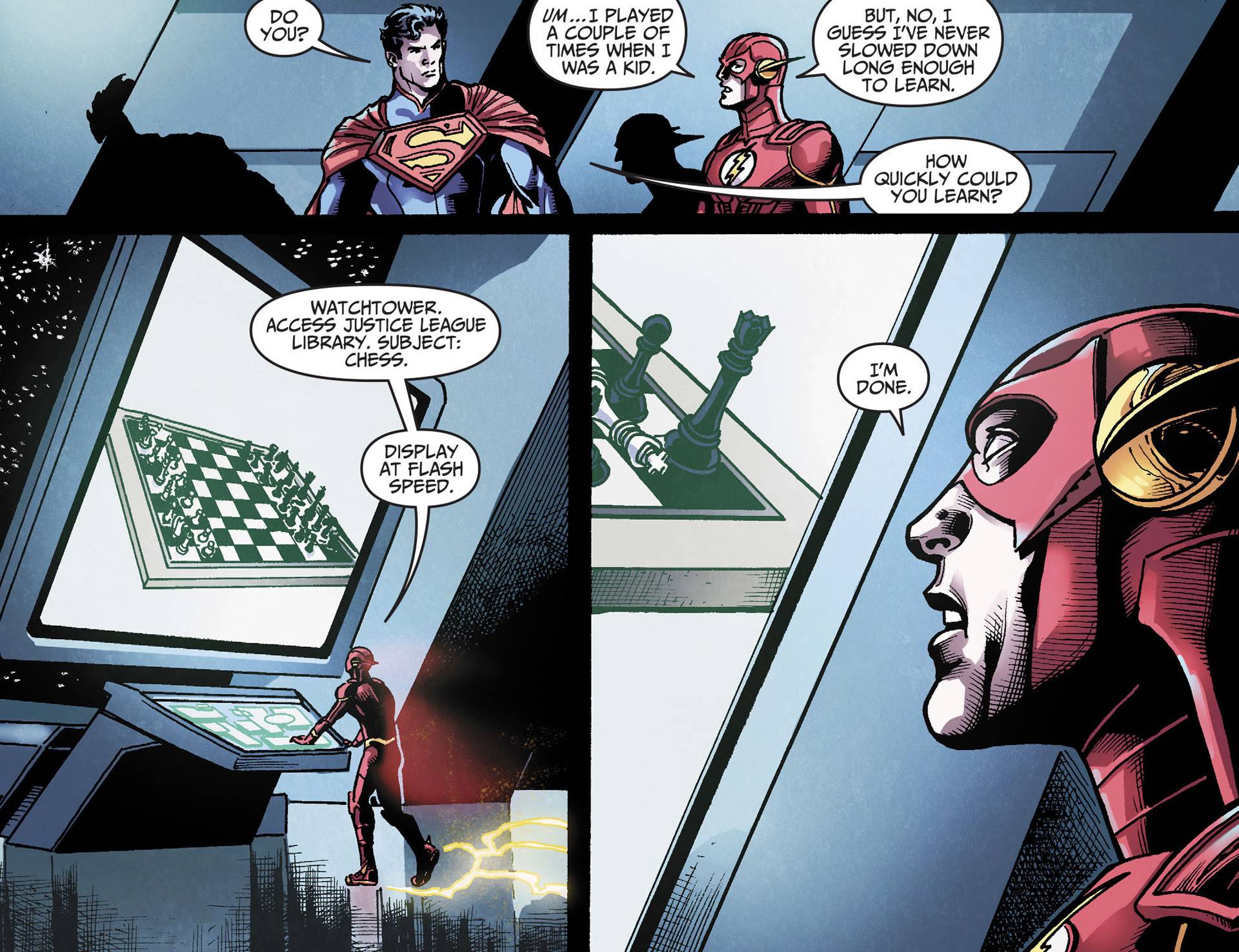 I also think your question is kind of answered here, as pointed out by Valorum; basically, Flash can regulate his own perception of time - he doesn't always think at light speed.

Another point: in The Flash series, Barry Allen is the author of Gideon, an artificial intelligence.

I don't think the question "Does the Flash have use for a computer? " is quite accurate; after all, heroes like Superman, Mr. Terrific, Brainiac-5 and Batman all have either enhanced thinking capacity or super genius intellect [in the case of Brainy, he's actually part computer!] and they all use computers easily enough. Superman can think almost as quick as the Flash, and has used computers before, both earth and Kryptonian tech, to figure things out. No, I think what's being asked is more: "Because the Flash thinks and processes information so quickly, would using a computer more slow him down, hinder him or help him?"

In which case, I'd have to say.... that depends upon the computer.

Let me give you an example:

In The Flash #163 Wally West's Flash was a newly wed to his wife Linda. They got a "late wedding gift" from "Uncle Toby", who turned out to be the Turtle. 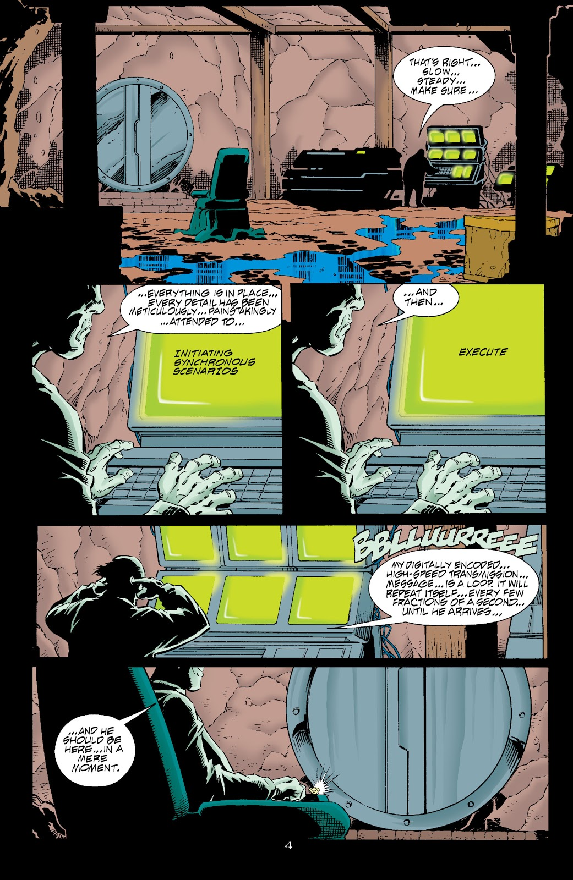 What it was in actuality was a hyper-sped up recording which was put on a loop and played to feed Wally clues as to the position of a number of bombs that were gonna threaten some of his hero friends [Batman, Superman, Aquaman, Raynor-Green Lantern] within literally under 2 seconds or less. 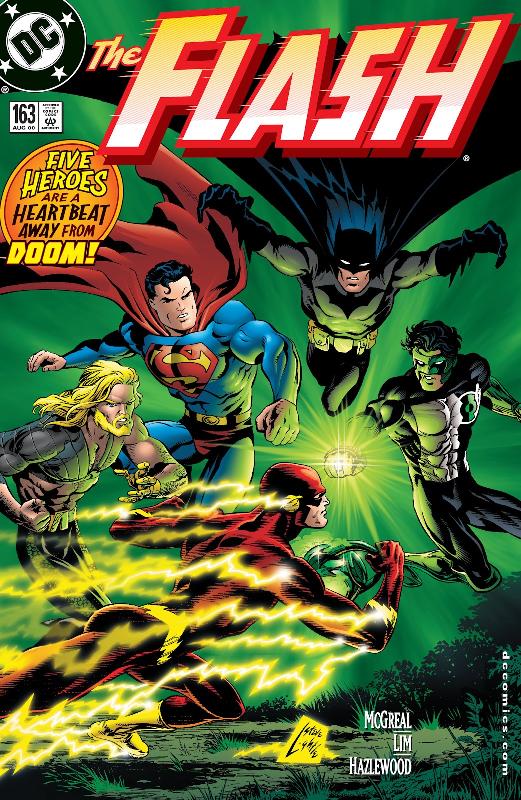 The whole thing was an elaborate trick to force Flash to move beyond light speed when he finally got to the Turtle's base in order to power the villain's Time Travel device. But to do so, Wally had to figure out some of the clues left on the automated computer which was running the execution program. 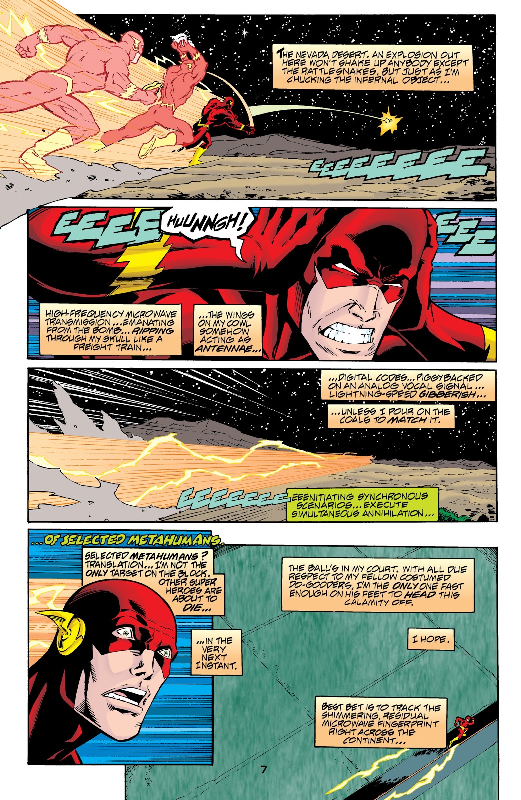 Flash "backtracks" the signal to the mainframe, which, though powerful, is nowhere near quick enough to spit out the information for him to find the bombs, which were all set to go off simultaneously. 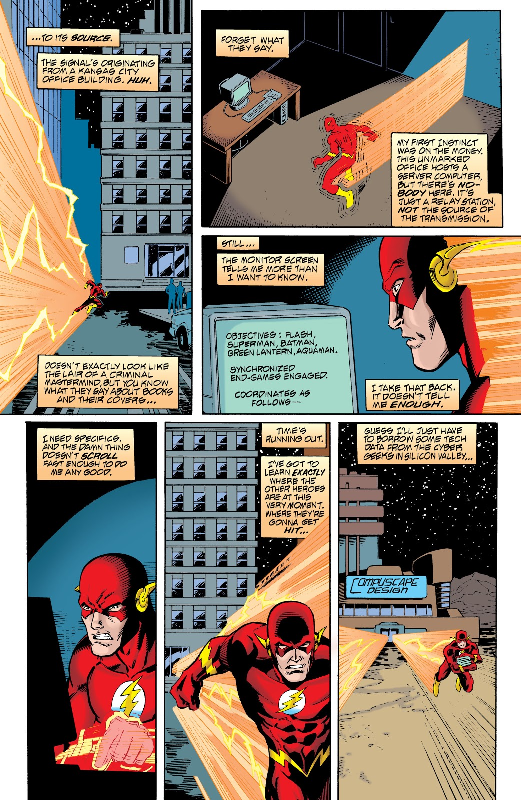 Note where Flash says "The damn thing doesn't scroll fast enough to do _me_any good." He didn't say that it's information was useless.... just that the device wasn't quick enough, relatively, to get the information to him in the time necessary for him to act. So, what did Wally do?

Simple: he basically upgraded the computer to a Super Computer Mark XXIV with advanced parts and increased its processing speed exponentially! 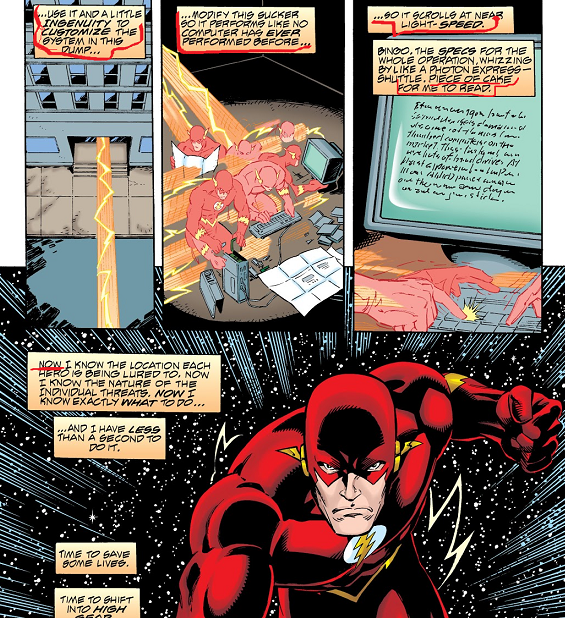 The exact words Flash used were "Now I know the location each hero is being lured to." The "now" is telling, because without the computer, the locals would have been some very specific information Flash would have had no real way of knowing. Yes, he could have theoretically run all over the US to find them in the given time.... but even wit his speed, it's unlikely he could be in 5 different places at once under normal circumstances.

So yes, even though Flash does think much, much, much more quickly than your average computer, that doesn't mean he has no use for them. It just means that, due to the nature of his powers, it would likely have to be a computer which can "keep up" with him to be of any practical good.

Not the answer you're looking for? Browse other questions tagged dc the-flash computers or ask your own question.

42
How does the Flash perceive time?