Why don't Mistborn and Mistings get drunk/poisoned because of the alcohol?

Note: I have read only the original trilogy and Alloy of Law so far.

Let me explain. Here's a quote from The Final Empire:

Dockson rolled his eyes. "The vial is filled with an alcohol solution and some flakes of metal, Vin."

Assuming that all of the vials that Mistborn and Mistings are seen drinking throughout the series are the same as this one, why is it that the alcohol doesn't have any kind of noticeable effect on their bodies? I don't pretend to know the science of this, but I would think that they would at least wake up with a hangover, or just fall over and die due to the alcohol.

Let’s say that the vials are the size of a typical laboratory vial, about 10 milliliters. We know from the quote given in the question that they contain, not alcohol, but an alcohol “solution.”

Waxillium Ladrian used whiskey (around 40% to 50% alcohol by volume here on Earth) in his vials, which is implied to be particularly strong.

The Alloy of Law

The volume of a shot glass of whiskey is about 40 milliliters. So a single vial of standard alcohol solution, presumed to be less potent than whatever Wax is using, contains less than a quarter of the alcohol of a standard shot of whiskey. Not enough to get one drunk, let alone dead.

The only main requirement for the solution that contains the metal is that it won't chemically react at all or otherwise alter the metal. Admittedly, alcohol is fairly easy to get and consume, for flavor reasons if nothing else. Spook when he's on constant burn in Hero of Ages just uses a mug of water and mixes tin dust straight into it. Later in the series you will see someone use fish oil.

Most vials do not contain more liquid than your average shot glass would. Only the hardest liquors would get someone drunk in that quantity, and only if they were downed with frequency. Vin seems to carry about 3 vials; that might be enough for a decent buzz, but isn't likely to make her fall over. (other answers have covered this pretty well while I'm typing.)

Alcohol gets processed through the body faster by physically fit individuals with a high metabolism, giving them less time with it's toxic effects. Anyone burning pewter has also automagically juiced up their body, further reducing any drunken side effects. Plus, naturally, our heroes are some of the most active people on the planet. They're gonna burn it off.

The vials are quite small, and contain an alcohol suspension of the metal. The sizes hinted at in the books match up with this official illustration for the Mistborn Adventure Game: 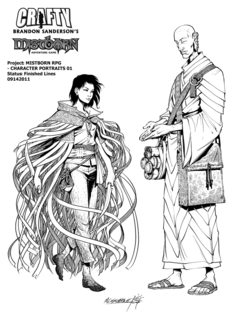 Those small vials in tucked between the belt sash of the Mistborn are accurate to what is described in the books. A vial of that size would contain less than a shot.

Since we don't know the percentage of alcohol contained in the vials, we can really only go on quantity, and it's not much. We also know they don't start stumbling and acting drunk, even though Vin is quite small and tosses back multiple vials at a time, so we can also assume that it unlikely to be a very potent alcohol solution. It's just enough to keep the metals from rusting.

Not the answer you're looking for? Browse other questions tagged cosmere mistborn or ask your own question.

14
Mistborn, Hero of Ages - The 'snapping' done by the mists reveals mistings. Of these, 1/16th burns Atium. Why 1/16th?
4
In the original Mistborn Trilogy, why didn't anyone notice that aluminium was not affected by Allomancy?
3
Does Metal have to be Hemalurgically charged for Ruin to control someone?
4
The concept of hell and heaven in the Mistborn series?
4
Did Gavilar and the Sons of Honor just get lucky?