Any comics or other media where Kara got to raise Kal-El as she was supposed to do?

Almost every source on Supergirl states that Kara was supposed to look after Kal-El on Earth.

It would be really interesting to see how a young teenager with superpowers manages to look after a baby while hiding from the government(s) and learning how to live on Earth.

I've seen a number of Elseworlds or Alternate Universe stories on Superman, but I've not seen any story where Kara got to fulfill her mission.

Is there any official comics or other media where Kara got to raise Kal-El on Earth?

By 'other media' I mean films (though I know where are not any), tv-series episodes (including animated), or anything at all that is sanctioned by DC. Not that I've seen any fanfiction like this either.

Comics wise, I haven't been able to find anything. Alternative versions of Supergirl. There are several different versions where she is either Powergirl (instead of Supergirl) and versions where Superman never existed, but not one where she arrives ahead of (or at the same time as) Kal-el and raises him. 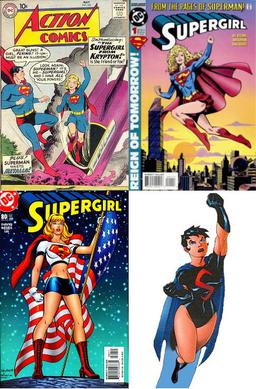 There are also no tv or film (live action or animated) where her story is told from her arriving to Earth ahead of Superman.

Of course, originally Supergirl wasn't his cousin, but was a survivor from Argo that her father sent to Earth hoping Kal-el would take care of her.

There might be some fan fiction (a few results come up on fanfiction.net which suggest that at least one person has written a story where Kara arrives first). Those links seem to be broken for me, so I can't confirm they really exist.

Not the answer you're looking for? Browse other questions tagged dc superman supergirl or ask your own question.

24
Is Supergirl younger than Superman or older?
2
Do Kryptonians know about the effect of yellow suns and how did they use it?
13
Why does Superman love Lois Lane?
5
Has Superboy-Prime ever been featured in any media besides comics?
13
How did the Kents raise a super-baby?
6
Can a power ring leave a wielder?
20
When and where was the name “Kal-El” first used?
0
Outside of the DCAU, does Post-Crisis/Pre- New 52 Superman have a “super mobile”, ship or other form of protective transport?