Avatar: Who is the weird guy with a third eye?

In Season 3 of Avatar: The Last Airbender, Aang and company are hunted by a strange guy with a third eye, after Zuko sends him to kill the Avatar. He never says anything, is accompanied by a seriously beat up looking vulture, and can shoot what I can only describe as nuclear energy blasts from his third eye. He doesn't look like he's using any bending I've seen, and I'm not even sure he's human, from his metal appendages. Who and or what is this guy?

Combustion Man is a villain who appeared in the cartoon series Avatar: The Last Airbender. His third eye is just a tatoo but it represents his "third eye" a center of chi mastery and the focus of his firebending power. 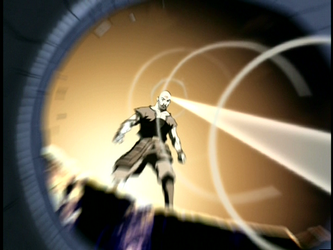 Origin: Little is known about Combustion Man's origin, however it is known that when he was a child, he accidentally shot off some of his body parts with his special power. He was first called "Sparky Sparky Boom-man" by Aang and Sokka in "The Runaway", then later re-named Combustion Man. Zuko mentions that his name isn't Combustion man, so we don't really know his name.

Powers and Abilities: Combustion Man has the strange ability to shoot a laser-like form of firebending out of his forehead. The laser is presented in the form of an energy ball that explodes upon impact. This power seems to become vulnerable when a projectile (such as a small rock) hits his third eye, making it weaker and subject to a backfire on himself.

While the producers of the Avatar series promised greater character and background development in the Legend of Korra expansion series, none appeared and the character's history remains unknown.

His true name is never mentioned, though Zuko knows it. He is referred to as Combustion Man.

He uses a specialised form of motionless fire bending allowing him to create guided explosions. It is believed that a lack of control over this power initially caused the damage to his limbs, necessitating his metal prosthetics.

Like the story of Zuko's mother, Combustion's Origins are considered to by the development team to be too interesting to rush in to a single episode. They've hinted at elaborating on his character in a later mini-series that bridges the Legend of Aang to the Legend of Korra

28
What stops other benders from mastering the four elements?

10
Who was the first Avatar?
18
Have people made a correlation with eye color and bending element in Avatar?
2
Who would qualify as the youngest Avatar
1
What happens to Raava after fusion with Avatar?
4
Who is this character from Avatar : The Last Airbender?
18
In Avatar TLA, why do Aang's tatoos light up in the avatar state?
8
Who is the Earth silhouette in the intro to Avatar: The Last Airbender?
5
Could the Avatar theoretically father himself?