Why doesn't the Green Arrow carry a sword?

If Oliver Queen is a master swordsman, why doesn't the Green Arrow carry a sword? Wouldn't it come in handy for all of those fistfights he loses?

It's not unknown for Green Arrow in the comics to carry a sword. 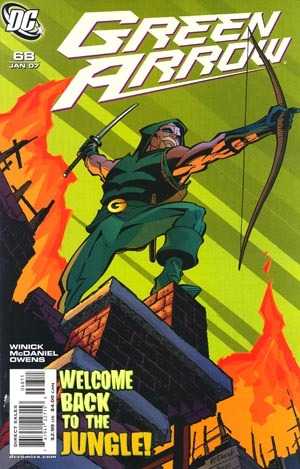 In a flashback sequence encompassing issues 66-68 (while he was recovering from said injuries on an island), he hired some of the best martial arts instructors in the world to come and train him and his companions.

While initially an inferior fighter and prominent non-martial artist, in recent continuity he has trained to become a proficient martial artist in several forms of hand-to-hand combat including judo, kickboxing and karate, although not on a level with Black Canary. He is proficient with a sword, as evidenced by a battle with Deathstroke in issue #62 and by a battle with Red Hood in issue #71

Obviously in the TV series he's shown as having then necessary skills to defeat well-trained swordsman but it's not his primary skill and his unarmed combat skills seem more than adequate.

Would a sword be useful, undoubtedly, but he got quite a lot to carry around already.

It's also, arguably, worth stating that Oliver has tried to desist from killing enemies in recent times and using a sword on someone while not necesarily lethal does do a fair amount more damage than a well placed punch.

I suspect that the producers writers want to keep the emphasis on his archery skills. The show is called Arrow after all.

Oh, and this is so much better than a boxing glove sword. 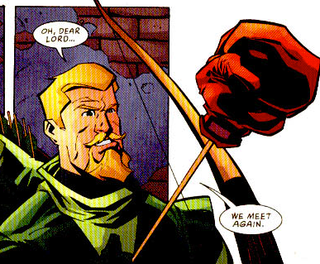 Not the answer you're looking for? Browse other questions tagged dc arrowverse green-arrow or ask your own question.

16
Where do Green Arrow and Hawkeye get their arrows?
2
Why are Barry and Oliver wearing their old Flash/Arrow suits in the Legends of Tomorrow trailer?
8
Why does Thea forget who the Arrow is in season 3?
3
Why don't the characters in “The Arrow” use these for everyone?
0
Why doesn't Green Arrow just ask Flash to capture Damien Darhk?
0
Why didn't Rip Hunter recruit The Flash and Green Arrow on the team?
2
Why was this person not affected (Arrow)
6
How did Susan make the connection to Oliver Queen being the Green Arrow but not the Hood/Arrow?
9
How did Green Arrow manage to make that arrow in the Crisis on Earth-X crossover?
6
Did Green Arrow ever acknowledge Batman as a “role model”