Near the beginning of Teen Wolf, Scott Howard is noticing bizarre changes happening to him.

Scott is speaking to his father in his father's hardware store and starts covering his ears in agony because of an annoying high pitched sound. Mr. Howard seems oblivious as to what was wrong with Scott.

Scott: What is that noise?

Scott then finds that the source of the noise was a child blowing on a dog whistle thinking that it was broken.

It is later revealed that Scott is in fact a werewolf. Scott's father, Mr. Howard reveals to Scott that he is also a werewolf.

If Mr. Howard is also a werewolf, why didn't he hear the dog whistle that was bothering Scott so much?

The most obvious explanation is that he simply didn't hear it. Despite his werewolf nature, Mr. Howard seems to be going through the same ageing process that normal humans face; greying hair, reduced vision and, presumably presbycusis, a condition that prevents those older than their 20s from being able to hear high-pitched sounds.

There's also the fact that he's worked around chemicals and loud noises for his entire working life, so he could easily have suffered from some kind of industrial-related hearing loss. 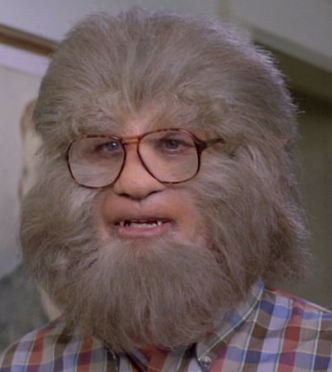 As a seasoned werewolf, you would expect Mr. Howard's response to be far less dramatic given that he's had years of hearing high-pitched sounds and learning to ignore them. It's also reasonable to assume that Scott's hearing may be hyper-acute since he's only just coming into his powers and doesn't seem to be able to control them. Contrast how easily his father changes into and out of being a wolf compared to how much energy Scott needs to exert.

I always assumed that he did hear it. He had spent decades of his life of hiding his true nature from others, from responding to sounds that others can't hear to being able to smell things easier than others. After so long, it probably is second nature not to respond to it. Not to mention, the kid has probably been blowing that whistle for hours if not days, he might be used to it already.

If you blow a dog whistle around two dogs, they won't both react. You have to adjust the whistle until one of the dogs reacts to determine that dog's particular pitch. The same happened in Teen Wolf. The whistle was adjusted to only one dog's (werewolf's) pitch.

Not the answer you're looking for? Browse other questions tagged teen-wolf-1985 or ask your own question.

6
Is there any mention of Scott Howard's mother in the original Teen Wolf franchise?