In the episode Where No One Has Gone Before in the first season of Star Trek: The Next Generation the Enterprise ends up at the end of the universe, and for some reason this means thoughts start becoming reality.

Why do thoughts become reality here? Is there some plot point I've missed or is it ever explained later? 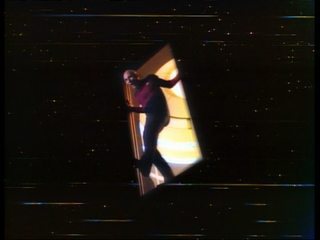 Thoughts becoming reality is what the Traveller used to take them there in the first place.

This is an ability his people have, which is what enabled him to move the Enterprise so far and so fast. After he catapults them across the universe, they arrive in a place where the difference between thought and reality is very thin, because he more or less identified the two in order to get them there.

From the episode's transcript:

TRAVELLER: You do understand, don't you that thought is the basis of all reality? The energy of thought, to put it in your terms, is very powerful.
KOSINSKI: That's not an explanation.
TRAVELLER: I have the ability to act like a lens which focuses thought.
KOSINSKI: That's just so much nonsense. You're asking us to believe in magic.
TRAVELLER: Well yes, this could seem like magic to you.
PICARD: No. No, it actually makes sense to me. Only the power of thought could explain what has been happening. Especially out here.
TRAVELLER: Thought is the essence of where you are now. You do understand the danger, don't you?
PICARD: Chaos. What we think is what happens.

The Traveler explains in the episode that he took the ship to a region known as "The Outer Rim" of the Universe, or the end of the universe. Supposedly (according to the Traveler) all reality if made up of thought, rather than matter, and this part of the universe allows even the less-trained/able/powerful to influence it. He is searching for beings who have the proper power of thought, which in this episode is Wesley Crusher, who uses this power to help guide the Enterprise back home.

To reiterate. According to the Traveler, all reality is actually thought, but in the milky way/local area this is less apparent. Out at the edge, anyone's thoughts can influence their experience of reality.

123
What are Guinan's powers from Star Trek: TNG?
32
Are there video games in the Star Trek universe?
16
Will I be able to follow the story if I skip The Next Generation & watch Deep Space 9 directly?
10
Why does Kieran MacDuff become first officer rather than captain?
7
How many times did Troi have a headache?
6
Strange orders and plot-points in TNG: “Descent”
5
What happened to the Enterprise after ST:TNG?
89
In which episodes did the Enterprise boldly go where no one had gone before?
2
Why do the phaser blasts of the U.S.S. Vengeance in Star Trek Into Darkness curve?