It was an old film, shot in black & white. Plot was a planned mission to (Mars?) Head of project & lead astronaut were father and son. Astronauts had to be on some sort of special diet for (weeks? months?) before launch. One man washes out but only realizes this at dinner when he is suddenly served a regular meal. Mission launches and reaches destination, but then father loses it and son is forced to kill him to save everyone else. 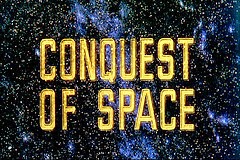 The film story concerns the first interplanetary flight to the planet Mars, manned by a crew of five, and launched from Earth orbit near "The Wheel", mankind's first space station. On their long journey to the Red Planet, they encounter various dangers, both from within and without, that nearly destroy the mission.

The father and son are Captain Barney Merritt and Colonel (soon to be General) Merritt. Indeed they're on a special diet:

The six crewmen who made it through the selection process go to the mess hall. Immediately their unique status is apparent as everyone else stands to attention until Sgt Mahoney and his “six little lambs” take their places at their own table. Their meal consists of a special diet of various flavoured tablets and water: “all the nourishment you need, no waste.” 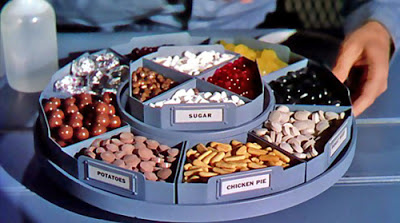 Indeed, the mission is to Mars:

Merritt questions the construction and purpose of the space craft being assembled. It has been brought into space and assembled piece by piece as part of an international combined effort. He is under the impression that the ship is destined to go to the Moon, but can’t understand why it has wings.

Fenton soon informs Merritt via a letter from the Supreme International Space Authority that the true destination of the ship is in fact Mars. The newly promoted general Merritt almost blows a gasket over this new development as he has all along been preparing to go to the Moon as a test run of the ship’s systems. “No word, no warning; just take off and leave!”

I haven't seen any mention of the meal showing the washout (there is one scene where one guy at the table has regular food, but it's basically about everyone else drooling over it), but one volunteer is scrubbed (although he later stows away):

Merritt’s long time friend Sgt Mahoney volunteers to go on the mission but he is rejected on the grounds of being too old.

And indeed, General Merritt does "lose it", forcing Captain Merritt to kill him:

As the voyage progresses General Merritt’s mental and emotional state further unravels. As he watches the planet Mars loom closer, he declares it to be both “the planet and the blasphemy.” During a routine report to Earth he rants about their mission being either to “Mars or hell.” He even declares that he would blow the ship up rather than complete the mission.

The leak is the result of sabotage caused by General Merritt, who in his deranged state shoots at his son with a .45 automatic. As father and son struggle the pistol discharges, killing General Merritt. Sgt Mahoney, witnesses only the tail-end of the struggle and thinks Capt Merritt shot his father intentionally. He wants to have Barney brought to trial or court martialled and sentenced to death hoping, “it will be slow so I can watch you kick.” Until that can happen back on Earth, Barney is still the ranking officer and therefore now in command of the mission.