The Traveler: Good or evil?

The video game Destiny is a great game, but doesn't do much for the player in the story.

I remember seeing a YouTube video that postulated that the Traveler might actually be the bad guy in the video game.

Note: I apparently misread the questions as asking for unbiased, canonical information that the Traveler is evil, not good. Oops. I will rewrite this answer.

It's a common fan theory that although the Traveler is ostensibly presented as a force of pure good in Destiny, it's actually evil, or at best morally ambiguous. This fan theory is discussed all over the internet, but a good example is this long thread on the official Destiny forums.

This fan theory does not come from a vacuum, however.

As most Destiny fans (or, indeed, video game fans who followed the large release of the game in the media) know, the story of Destiny went through radical and rushed changes. This was allegedly leaked thoroughly, albeit messily, on reddit and widely reported in game media. The reddit post claimed that the story was very different in earlier stages of development, and that it was changed not long before release:

The story revolved around discovering that there was something wrong with the Speaker and the Traveler. As a Guardian, you were abducted by this yet to be named group led by Crow (a deleted character)...The Traveler was the cause of the collapse of the Golden Age because this group found through their travels that the Darkness was a spawn of the Traveler rather than its rival. Essentially when the Traveler was brought to Earth it unleashed the Darkness and took over the technology humanity used and turned it against them. As that happened centuries ago, the truth was twisted through the Speaker to say that the Traveler protected Earth in its darkest moment rather than destroyed it."

Some of this can be corroborated – the deleted character Crow did appear in a pre-release trailer, and the character was changed to the Queen's brother Uldren Sov, Master of Crows, in the finished game. As a whole, whoever, it must obviously be taken with a grain of salt.

Two interesting pieces of concept art from the game's early stages are also intriguing; it shows ships flying to the hollow inside of the Traveler, and seems to imply that what ended up as the base game's final level and the scene of the last boss encounter, the Black Garden, was originally located inside the Traveler: 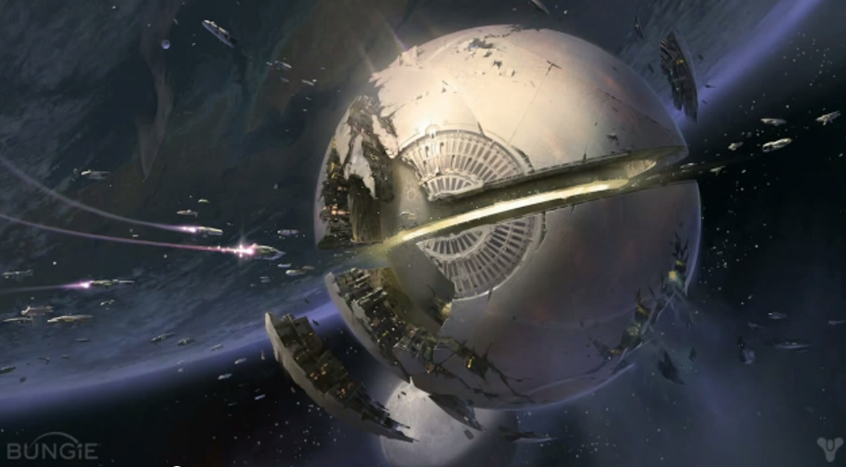 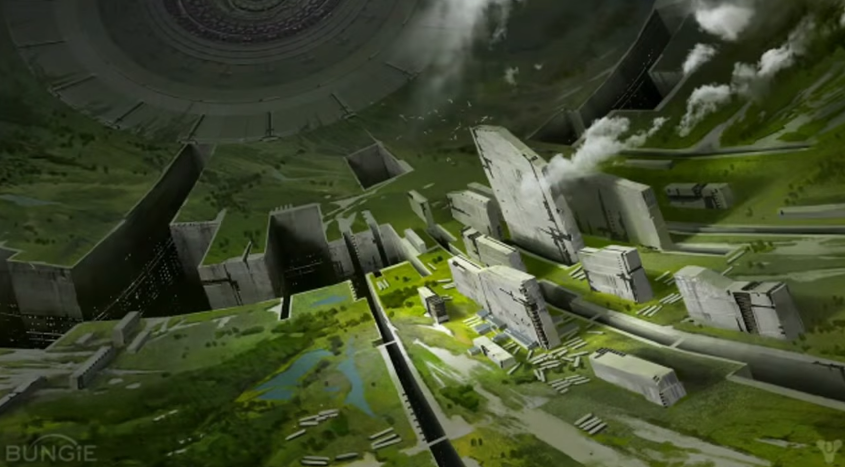 In the finished game, the Traveler is mostly assumed to be an entity of good, but there are some information that hints otherwise. Here's a relevant Grimoire called Ghost Fragment: The Traveler 2.

This has been such a long chase. This will be the place you will fight. Fight and win.
But do you really know why you go where you go, and where this journey is taking you?
The chase leads you where you need to be, you believe.
Unless...you are being pushed.

Another Grimoire card, Enemies: Darkness talks of the Collapse of humanity and how the Traveler saved us, but contains this tidbit at the end:

Certain positions - often labeled heretical - imply that the Traveler itself triggered the Collapse, or that it knew the Darkness was coming for it and hoped to use the Solar System as a sacrifice or a proxy army. The Binary Star cult is one notable example.

And from the Grimoire Legend: The Black Garden, told in first person by the Guardian Pujari about a vision he had (for context, Guardians are literally undead beings brought back to life by the Traveler's "light"):

The Ghost said to me: You are a dead thing made by a dead power in the shape of the dead. All you will ever do is kill. You do not belong here. This is a place of life.
The Traveler is life, I said. You are a creature of Darkness. You seek to deceive me.
But I looked behind me, down the long slope where the blossoms tumbled in the warm wind and the great trees wept sap like blood or wine, and I felt doubt.

This is obviously vague. Grimoire is supposed to be esoteric and mysterious, much like the original story of Destiny is rumored to have been (and the reason for its gutting), but these are at least widely regarded by the fan community as hinting at a more nefarious Traveler using the Guardians for its own means.

Xûr, Agent of the Nine, visits the Guardians once a week. The Nine are mysterious beings who live outside the Reef (the asteroid belt), and they are not affiliated with the Traveler or the Guardians, although they seem to want to aid Humanity. Xûr says mysterious things when you approach him, and one of these lines is:

Your traveler has a dark mirror.

Even if the Traveler itself, or the Light, is not canonically evil in the finished game, there are other hints in the game that the dichotomy of Light and Darkness is not necessarily one of good and evil respectively, as well as some hints that the Speaker might not speak for the Traveler or the side of the Light.

We know that the race of the Awoken (whose undead also are among the ranks of the Guardians) don't really believe in a sharp divide between Light (the Traveler) and Darkness. What are the living Awoken (like the Queen and her brother) working towards?

The Stranger, of the race of the Exo, is not a Guardian and is not "forged in the Light", but she helps the player Guardian. She says that a side must be taken – "Even if it's the wrong side" – and chastises the Awoken for not picking a side. What side has the Stranger picked?

And who is the Speaker, who acts out the Traveler's will through the Guardians? He wears a mask in the Tower, why? He's not universally trusted. Like the earlier Grimoire stated, the Binary Star Cult is one faction that believes the Traveler triggered the collapse. The Cult of Osiris is another; their representative in the Reef, Brother Vance, was once a Guardian but left their ranks. He now seems to follow the Awoken Queen, and while he favors the Light, he doesn't seem to think the Speaker represents the Traveler/Light. He says these relevant things:

He is the one true Speaker, who knows that the Traveler will never speak again.
I follow Osiris, not the Speaker. Do you know his legend?
Ask yourself "What would YOU do if the Speaker was proven a charlatan?"

The Cult of Osiris is led by Osiris, an exiled Guardian who seemed to dabble in Darkness (together with some other characters from the lore, like Eris Morn). Apparently he was originally intended to appear in the original storyline of Destiny as a mentor to the player, accompanied by a robotic assistant, who would later be re-purposed as the aforementioned Stranger

So there are still some unresolved plot points that hint at a deeper lore here than simply "The Traveler is of the Light and it is good; the Darkness is evil". Some believe that Destiny 2 will bring back these plot points. Who knows if that's true, but the article sums up what we know well, and brings out interesting arguments for the theory.

I can not access the grimoire right now but I made this account as I was lurking in the site and HAD to contribute something...

I believe the Travellers nature is quite ambiguous, to the guardian, everyone always speaks of the Traveller as the force of good and a protector against the darkness.

However with the Taken King, we learnt that the Traveller existed in the past among many moons. The Hive grew from a primitive race, conquering entire galaxies chasing the traveller. The traveller would find a potential species, advance their 'golden age' and prepare them for the darkness, the Traveller soon realises each species will NOT survive and then it leaves...leaving the remaining civilisation to their doom (The Fallen suffered this fate, this is what they know as 'The Great Whirlwind'). This can be seen as the Traveller trying to selfishly prolong its survival by leaving those to die, but it know it has a responsibility to serve other species and at least try to prepare them. Because the darkness will likely come for them anyway.

The only thing that stopped the Traveller leaving Earth was Rasputin, the last warmind. Which is an entirely different topic and like the traveller it has been discussed, is Rasputin friend or foe...

Not the answer you're looking for? Browse other questions tagged video-games destiny or ask your own question.