During the escape from Jakku, Rey flies the Millennium Falcon through a rear booster of a crashed Super Star Destroyer. She flies inside that ship a fair distance with plenty of clearance.

Basically, I'm wondering if her flight path through the Super Star Destroyer would have been possible using what we already knew, or if we have to assume that Disney canon has new schematics.

We know the ship has been scavenged for a considerable time, but looking at the flight video, we see areas that appear to already be hallways/tunnels/access paths already large enough to easily accommodate the MF. All of this takes place in the very rear of the SSD.

This clip, starting at 3:49 and running to 4:12, shows the flight. So, we have at least 20 seconds of flight time along a mostly-straight path. For those without video access, here are some key images from this flight showing that the path is primarily intact and looks like the open spaces were designed to be open, rather than having been scavenged (which, given the dimensions, is also unlikely to have occurred, anyway).

Rey enters the engine pictured in the center here, although a few seconds after this shot. This shot gives a better overview of the structure.

This large obstacle is still present (not scavenged/destroyed), and still there's plenty of room to maneuver.

This "door" and other designs seems to indicate the space was meant to accommodate large ships, or simply be spacious.

The large open access port here may give clues as to location?

Rey exits here, but you can see that the path she was on, parallel to the "pipes" we see in most of the scene, continues a bit further into the distance.

It doesn’t seem to

The length of the Millenium Falcon is given in The Force Awakens: Incredible Cross-Sections as 34.52 meters: 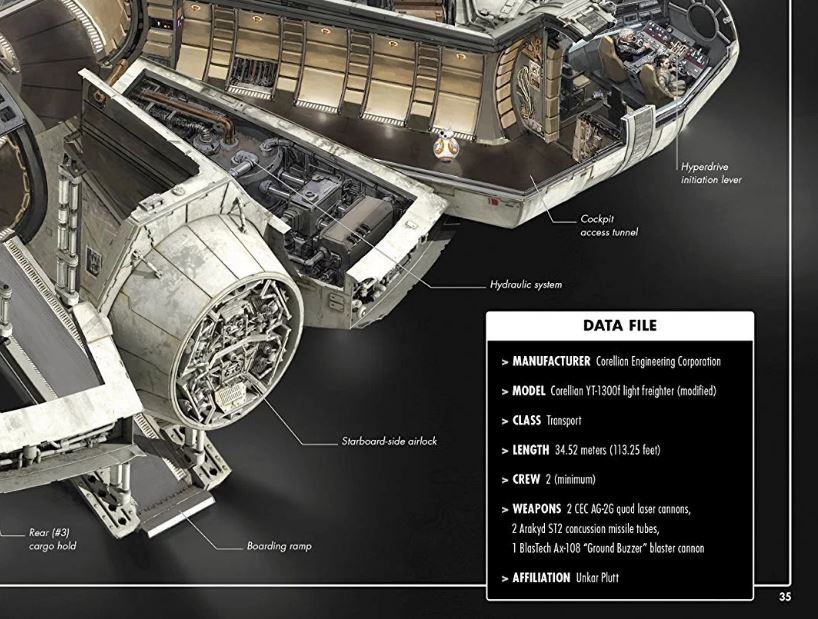 This is basically identical to the various Legends sources that Wookieepedia mentions:

This has led to some inconsistencies in the reported length of the vessel in different Star Wars publications. The New Essential Guide to Vehicles and Vessels (2003) states that the Falcon is 26.7 meters long. In August 2008, Star Wars Blueprints: The Ultimate Collection gave the length as 35.37 meters while the Millennium Falcon novel, published in October, gave the length to be 35 meters. The StarWars.com Encyclopedia, updated in September 2011, stated a length of 34.75 meters, which is the same as that of stock YT-1300 freighters. The most recent publication to give a length of the ship, the Millennium Falcon Owner’s Workshop Manual, published in the UK in November 2011 and in the US in February 2012, gives a measurement of 34.37 meters.

The ship that Rey flies through is a Super Star Destroyer:

Ahead lay the bulk of a downed Super Star Destroyer, its mass inconceivably large where it rested on the sand. Pulling on the controls, she drove the ship downward—and into the gaping breach that was the center of a ruined engine thruster.

The Databank informs us that the length of a Super Star Destroyer is 19,000 meters. The old Encyclopedia has a similar number.

Generally speaking, canon measurements of the size of the two ships seem to match up well with recent Legends numbers.

It’s a little hard to tell, but in this picture of a Super Star Destroyer from the Databank, it doesn’t seem that the rear width can be less than about 1/6 the length, or about 3160 meters. 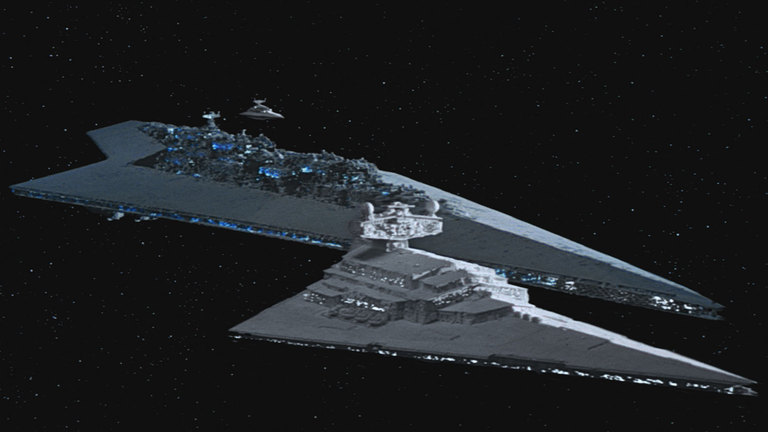 Here are the rear engines of the Executor, a Super Star Destroyer: 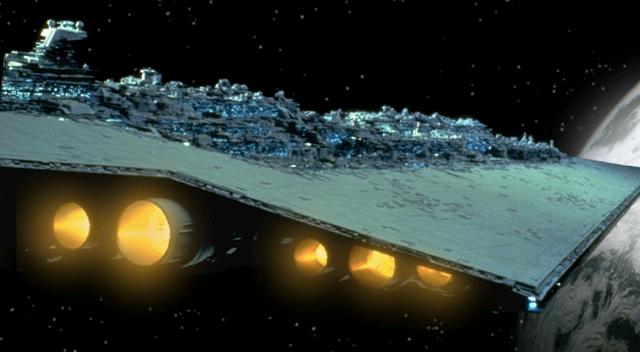 These engines appear to take up about 1/20 of the width of the Star Destroyer, or about 150 meters.

So, putting this all together, based on pre-existing sources, Rey needs to get an object whose longest dimension is about 35 meters through a hole with diameter of at least 150 meters. Not so difficult.

Of course, it’s possible (and even likely) that the Super Star Destroyer that Rey flew through had different dimensions. But her feat is consistent with pre-existing (and particularly Legends) sources.

To tackle this question, I had to look at new canon and pre-Disney canon both.

To start, current canon established in Rey's Survival Guide and Star Wars Battlefront's Battle of Jakku DLC tell us that the downed ship was called the Ravager.

It was an Executor-class Star Dreadnought.

Unfortunately, the history of "Super Star Destroyers" has left them with varied lengths and limited blueprints/schematics. The Executor-class, specifically, has been canonized at 19,000 m.

There have been decent cross-sections of other large ships, but nowhere near as large as the Executor. However, looking at the Imperial Star Destroyer cross-section from Star Wars Incredible Cross-Sections, we can see that there is a considerable number of open gaps inside the hull, especially around the engines. 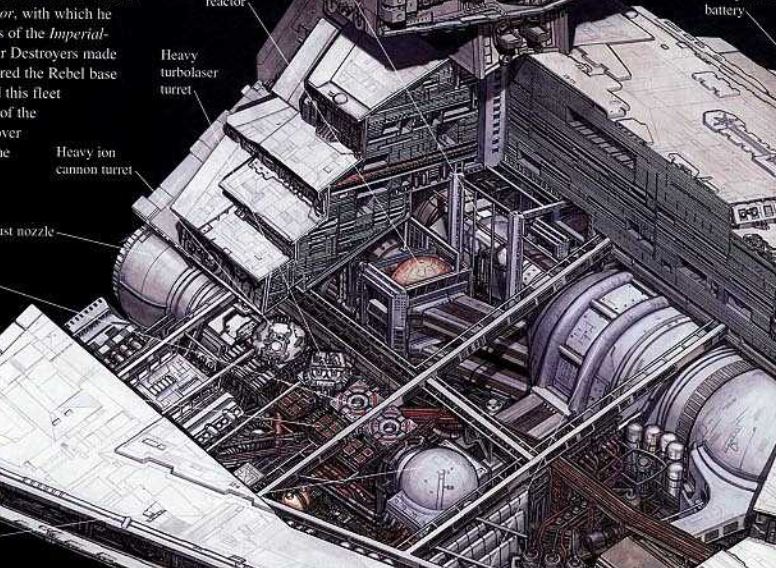 Given the length of the Ravager, and the number of seconds of flight where we do not see the flight path (because the camera is focused on the TIE pilot or inside the Millennium Falcon), it reasonable to assume that sufficient space would have already existed in an Executor-class, without The Force Awakens needing to reconfigure the innards.

So, there's primarily no conflict here because there was little existing information to conflict with.

In researching this answer, I found something odd with the back of the Ravager. Specifically, when you look at all the visible engines.

These engines are laid out in a pattern that is apparently shaped like this:

The problem with that is the Executor has a different engine configuration. Namely, it's engines are arranged in a 3-2-3-2-3 pattern, from outside to outside. Furthermore, there are noticeably different sizes of engines, so that you could make a simple diagram to represent the arrangement like this:

You can confirm this arrangement with original stills on TheForce.net's Executor-class page, and that models have been using that configuration for some time: 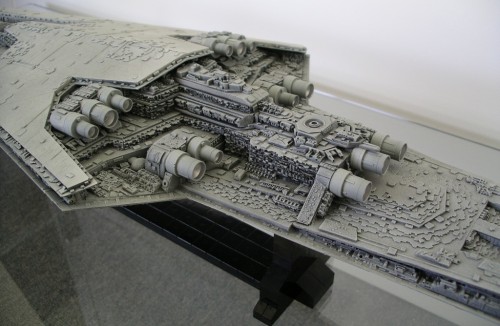 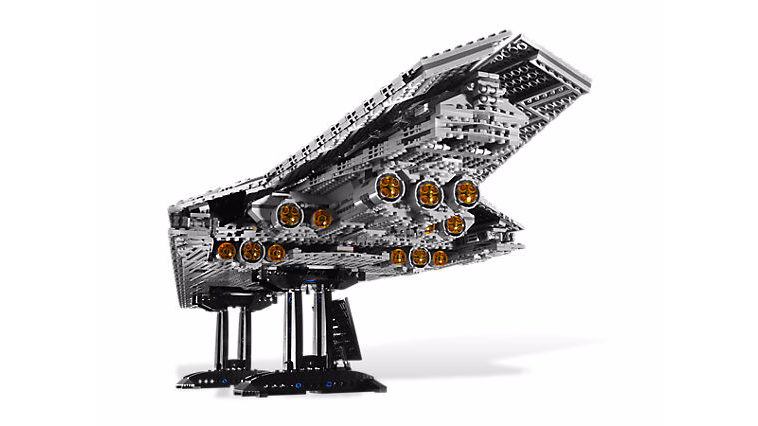 But the downed Ravager in TFA doesn't match up. The 2nd, completely visible set of 3 engines is much too close to the other set (which could only be the rearmost), meaning the middle set of engines has an extra engine (and the outermost set has broken off), or the distances have been changed up and we *are seeing the outermost set.

Yet, even if we are seeing the outermost set, the three engines are the same size, and not in an oOo pattern.

Oddly, I can't get this image to match up with the shot of the Ravager crashing in Battlefront. There, the Ravager clearly has the 2-engine groups where they'd typically appear, but special effects make the rest of the engines hard to make out, even after I processed the best shot from the dozen videos I watched: 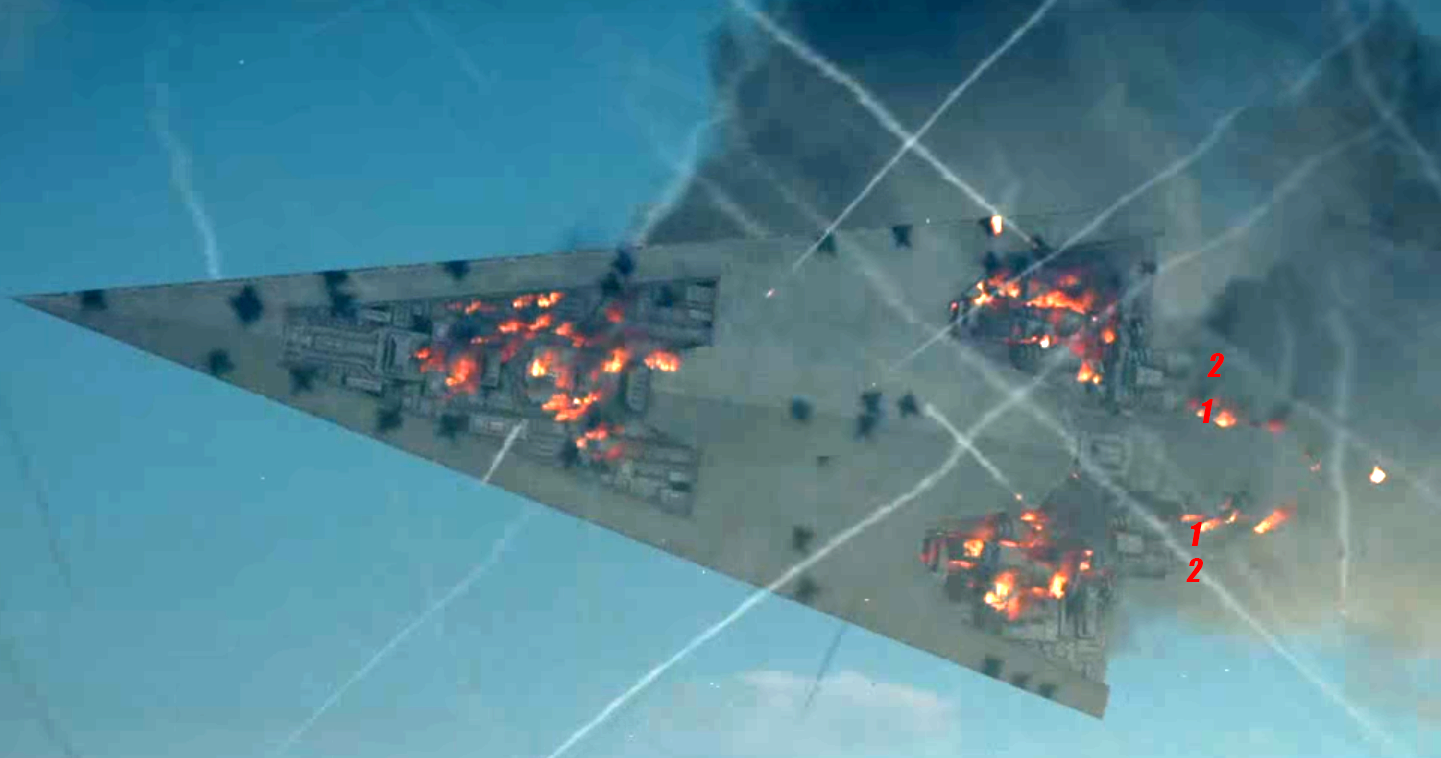 This means that the Ravager, at a minimum, wasn't your standard Executor-class ship, and it's using a different engine configuration. It either did not have the 13-engine standard mentioned in Star Wars: Imperial Handbook: A Commander's Guide, or it the outermost engines aren't alternating size like every other Executor-class we have clear images of, or it does have the 13 engines but in some other size & grouping configuration.

The rusting shell of the battleship may have cavities inside where the functional destroyer does not. The outer armour may survive the crash better and withstand the erosion longer than the internal bulkheads.

Ray uses rope climbing to access the internals, and the engine exhausts show signs of some erosion that may have touched internal bulkheads even more.