I'm looking for some help please; I'm trying to find out the title(s?) of a book(s?) I read over 20 years ago. I can't remember much about them — may have been a series (I think there was more than one) — but the main character was a man, may have lost a wife / lover (not sure on that point). I think he was contacted by a police-type force working across parallel universes (quite sure on that point). The passage that stands out in my memory vividly is from (I think) the first book, where he has an overwhelming sense of somebody being in the passageway outside his bedroom, but there's no-one there (very certain) but then somebody does pop in from a parallel universe (fairly certain on that point) - I think he's taken to the police force's base (but not certain and may be getting confused with Moorcock) - something in my memory says the series may have been written by an American author (but not sure). thanks in advance for any help anybody can give. :)

Possibly the first of the World of Tiers books, The Maker of Universes. The book begins as an old man and his wife are looking over a house. The man goes into the basement and gets a funny feeling and hears a strange horn call. Out of nowhere a portal opens and he sees a red haired man (Kikaha) surrounded by strange ape-like men trying to attack him. Kikaha says something like "there you are!" And throws a horn through the portal to the old man, whereupon the portal closes. The old man is mystified and goes home but the whole thing keeps going through his head. At last he heads back to the house in the middle of the night, blows the horn, the portal opens, and he steps through.

The series consists of three novels:

In Patton's Spaceship, Mark Strang is an art historian whose family (including his pregnant wife) dies in a terrorist attack. Shortly before the attack, Mark's father, a professor who has been investigating the terrorists, tells Mark of a threatening office visit from a man who seemed to materialize and vanish from just out of view in the hallway.

An interdimensional police force called ATN(1), derived from a culture that diverged from our timeline in ancient Greece, recruits Mark to be a dimension-hopping secret agent to oppose the Closers, the descendants of an alternate-timeline Carthage. An agents' role in the temporal arms race is to create new timelines by modifying historical events, such as by introducing the anachronistic technologies of the books' titles.

The novels have been gathered into one book, The Timeline Wars (1997): 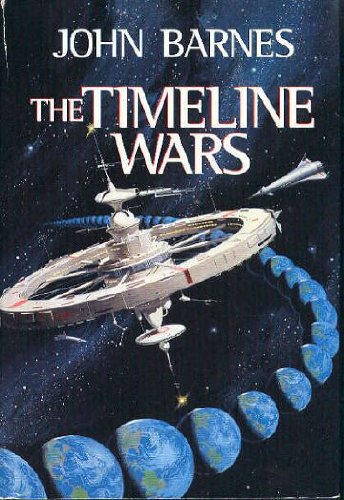 Parts of it sound close to the lensman series by E. E. "Doc" Smith, as there are some parallels, kimball kinnison is a member of a inter-galactic police force that opposes the invasion from creatures of another dimension. in the last book he is launched into some interdimensional plane and sensed by his wife from multiple dimensions away.

11
Is there any evidence that using alternate universe/timeline in a franchise hurts/helps it?
5
Book featuring magic headgear and death by cats
16
Story Identification: young adult fantasy series, possibly published in 70s-90s, christian fiction
7
Alien infiltration story in 1960s Analog where aliens with some small deformity take over the secret police
9
Children's book from the 90s early 00s about kids discovering a parallel town. Green book cover
14
Dystopian near future where paper is banned because it can't be monitored remotely (digitally?)
13
Book identification: 1990s children's book with robot and credit card
12
Story identification: kids in hot-air balloon, chased by wizard