How does the Muramasa Blade block Wolverine's regeneration capability?

Wolverine's mutant powers can't heal him faster if he is wounded by the red Muramasa Blade (not the old black).

From the linked Wiki:

In a subsequent fight with Captain America, the sword was used against Wolverine, leaving a scar on his chest, which oddly didn't heal as usual. After the fight was over, Wolverine gave the sword to Cyclops, explaining it by saying: "This is the only thing in the world that can put me down for good." 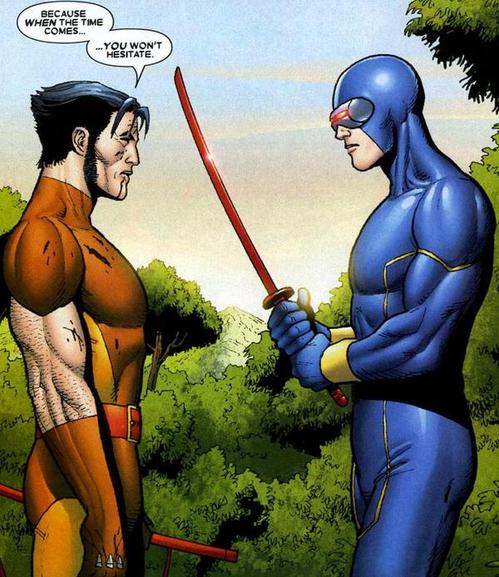 I want to know how this blade works such that it can block the regeneration powers of Wolverine.

But we're discussing the Red blade.

The blade has easily cut through the armor of a S.H.I.V.A. (Earth-616). robot on a molecular level and has also "sliced" one of Cyclops' optic beams into several different beams and reflected them in different directions. The sword is also capable of greatly reducing the efficiency of a superhumanly fast healing rate.

Granted, the second passage does not address exactly "how" it works, but the first passage explains that the Muramasa blades are imbued with mystical properties and abilities. As much of a cop-out as it sounds, it seems that as of now, the best answer possible is, "it's magic." I do, however, make note of the second passage because it discusses the blades ability to do damage at a molecular level. While unexplained, it's possible that the blade may be able to damage enough of Wolverine's cells in such a way that it slows down his healing factor.

In the Marvel Database it says: 'The second Muramasa Blade's location was revealed to Wolverine by the Silver Samurai[4]. This sword, currently wielded by Wolverine, was a sword forged specifically for him by Muramasa. On their first meeting in Japan, Wolverine came to Muramasa after his wife Itzu had been murdered, so he could help him to "kill 'em all". Muramasa accepted, and promised to forge him a "mighty blade -...- against which all... even one as great as you... will fall" using a piece of Wolverine's soul. When Logan came to claim the weapon[5], Muramasa gladly gave it to him, telling him to "wield it like an angry god".'

My guess would be that since the blade was made with a piece of Wolverine's soul, that it may cancel out his (and other's) healing factors through some sort of resonant quality.

Also, from the same wiki article, it mentions that a robot that was sliced in two was not just sliced, but was actually affected at the molecular level. This could also suggest that the damage done is at too low of a level for most healing factors to recover from. I'm guessing that molecular level damage would result in the wounds edges no longer necessarily being the same organic substances, leaving a sort of irregular scar. This could interfere significantly with the healing process.

You can read more here: http://marvel.wikia.com/Muramasa_Blade

Wolverine used it against a S.H.I.V.A. robot, cutting it in half with a single blow. Later research of the remains of the robot showed that it was not cut, but rather "sliced, on the molecular level". The scientist who was doing the research theorized, that the instrument could have been some sort of plasmic form.

71
How to kill Wolverine?
13
Could the Muramasa Blade cut through Adamantium? What can't it cut through?
7
What happens when Wolverine's head is removed?