How is the WESTAR-34 blaster pistol (used by Jango Fett) powered? 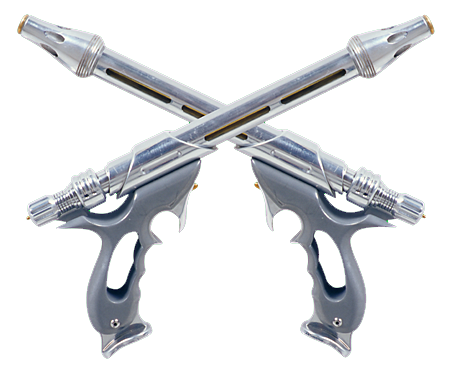 These weapons are quite small and I don't see any place to insert a power source.

Other weapons do require a power source. For example, Wookieepedia cites the canon reference book Ultimate Star Wars when it describes the capacity of the E-11 blaster rifle:

Its standard issue power cells carried energy for 100 shots however the rifle could also be loaded with plasma cartridges that could last for more than 500 shots.

Indeed there seems to be plenty of room on the E-11 to place a power cell or plasma cartridge:

(I believe the power cell is the near-white, square protrusion from the middle of the E-11 shown above.)

Where is the power source for the WESTAR-34 blaster pistol? Does it acquire power some other way? How many shots can be fired before reloading?

According to Star Wars: Attack of the Clones: The Visual Dictionary, a DK reference book published in 2002, the WESTAR-34 blasters have a power cell just above the grip:

Since this book was published long before the Great Disneyfication, I'm not confident that it can be considered a canon source. However, it seems unlikely that this is the kind of information that Disney would have changed.

Having looked through both Ultimate Star Wars, the fully-canon DK reference book, and the Attack of the Clones novelizations, I can find no other relevant information.

Not the answer you're looking for? Browse other questions tagged star-wars weapon blasters or ask your own question.

69
Why do blaster bolts move slower than the speed of light?
28
Why has Jango Fett been cloned?
6
What happened to the Jango Fett template?
13
How are Star Wars blasters properly reloaded/charged/etc.?
21
How did Kenobi plan to bring Jango Fett to Coruscant?
7
How exactly does a blaster bolt kill?
71
Is Jango Fett inept?
11
How was Jango Fett chosen?
2
Was Jango Fett a Sharpshooter?