If telepaths can influence minds, why don't they fix the world and bring peace?

Telepath mutants such as Charles Xavier, Jean Grey, Emma Frost, etc... are powerful telepaths who can exhibit awesome telepathic feats and abilities. If they can influence the minds of others to the extent that they can control them, why don't they, especially Professor X, bring about world peace and fix the world? Why does Professor X let wars happen, murders to take place, bad things to happen to good people, intolerance against mutants, when he can use his powers through Cerebro to prevent them?

It is not possible for telepaths to "reprogram" people, and even if they could, it would be immoral to do so

In the issue New Avengers: Illuminati #4, Xavier himself says that minds cannot be reprogrammed. This can be seen in the strip below (click the image to enlarge). 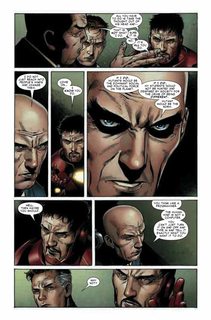 I do not just reach into people's minds and change them. - Xavier

Then when challenged on this:

You think like a programmer. The human mind is not a computer. You can't just turn it on and off and type in and tell it exactly what you want it to do. - Xavier

I can't find a suitable image for the following page where he elaborates why not, but here's the transcript:

Because it’s an organism. It’s an organism designed to produce free will. It remembers what it is and how it got to where it is. Sure, I could suggest a small thing, like having someone not see me as I walk by, but... If I reached into your brain and told you to wear a dress and call yourself “Sally” – yes, you would do it. But eventually, over time, your mind would find a way to work against that which, in your case, it knew to be false. And if it couldn’t... it might find a way to do something to hurt you or others... It would react. Plus – if, listen, if I did do this... ...there’s a moral line that is being crossed that we could not come back from. - Xavier

Given this, while we know he is able to temporarily control people and affect certain things like memories and abilities, he isn't able to simply turn people into what he wants them to be (at least, not in a lasting way). While he could theoretically manipulate a large number of people at once, fully controlling everyone on the planet 24/7 is simply not possible, and thus this solution is a non-starter.

That aside, we can also probably assume most of them would have similar moral issues with such a plan as Xavier. Controlling everyone to this degree would be akin to murder of the person's mental identity. Xavier also has a darker side to himself that he tends to want to keep in check (Onslaught in an example of it's manifestation), and pursuing this kind of power seems to be the opposite of what he wants.

Disclaimer: Comic continuity is a volatile thing. There's so many universes within Marvel with their own rules, and even within the same universe contradictions can and do happen, ultimately all for the sake of plot. There's bound to be counter-evidence somewhere of someone being rewritten and controlled. But if "they would if they could", we can probably safely assume this is why "they can't so they won't".

I can answer your question by using a quote form Arkady and Boris Strugatsky's Hard to be a God, form conversation between Don Rumata and Doctor Budach: (emphasis mine; three points represent a part of converstaion I omitted)

"All right, suppose you had the opportunity to give God some advice?"

"You have a fertile imagination," said Budach amused. "That would be splendid. You know the Holy Scriptures? Wonderful! I'd be happy, to carry on a conversation with you."

"You flatter me. But still, what advice would you give the Almighty? What, in your opinion, would the Almighty have to do so that you'd be able to say: the world is now truly good and beautiful?"

"Now I can see that things are not quite so simple," he said. "I've never really thought about the problems ... I believe we have discussed all possibilities now. However," he leaned forward, "there exists still another possibility: Ordain that mankind will love work and knowledge above all, that work and wisdom will be regarded by them as their sole reason for being!"

"This is an alternative I might choose perhaps," he said. "But could it be justified if I were to rob mankind of its history? Does it make sense to replace one type of man with another? Would this not mean in the end that one would wipe this mankind off the face of the earth and create another in its place?"

Budach frowned and remained silent, busy with his own thoughts. From below the windows came again the melancholy groaning of heavily laden carts. Suddenly Budach spoke softly:

"Then, oh, Lord, remove us from the face of the earth and create us anew, make us better men this time, more perfect beings. Or, better still--leave us the way we are, but ordain that we can follow our own path!"

"My heart is heavy with sorrow," Rumata said slowly, "but this is not within my power."

The book, although considered science fiction, has little to do with it. It is a masterpiece nonetheless. It's set in medieval times, and portrays the culture (well, I say culture, but...) as it was - filthy, evil, and dark. There are 2 films, the most recent being considered a better one. Although I want you that it is in no way appropriate for general audience. Even for mature viewer.

Not the answer you're looking for? Browse other questions tagged marvel x-men x-men-cinematic-universe super-hero telepathy or ask your own question.

10
Who designed the X-Jets, and where were they built?
11
Only Professor X goes bald due to his psychic powers, why?
6
In the Hulk movies, why don't they make him talk?
5
Telepathy vs. Telekinesis in Marvel Universe
10
If mutants can travel in time, why do they not change more events?
17
Why did they abandon the idea of telepathy between Troi and Riker?
3
Why don't all heroes in the 1994 Spider-Man cartoon take out the bad guys together?
10
Who was the first telepath?
4
How was Domino able to be tortured when she was so lucky?
1
Why did Magneto bring the subway train near Jean?