Where do the Silurians originate?

In Doctor Who Series 5 Episode 8, "The Hungry Earth", the Doctor says that the Silurians are ancient inhabitants of Earth, not aliens:

DOCTOR: They're not aliens. They're Earth-liens. Once known as the Silurian race, or, some would argue, Eocenes, or Homo Reptilia. Not monsters, not evil. Well, only as evil as you are. The previous owners of the planet, that's all. Look, from their point of view, you're the invaders.

But in Series 7 Episode 2, "Dinosaurs on a Spaceship", he sends Amy and Rory a postcard from 'Siluria': 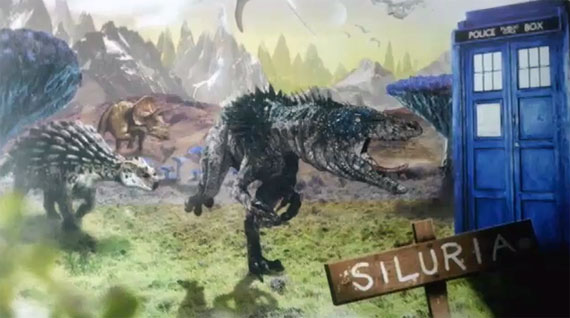 But if the Silurians are from Earth, then what and where is Siluria?

Are they really originally from Earth, or did they come from this Siluria and just colonise Earth before humans came along?

But if the Silurians are from Earth, then what and where is Siluria?

The Silurians are indeed from Earth. They evolved here in the same way humans did, just 200 million years earlier. With the changing of environmental conditions on the surface, many hid away below ground, while others left the planet.

In Dinosaurs on a Spaceship, the spaceship in question is a Silurian vessel that left earth and took some of the wildlife with it, in order to safeguard against extinction. Unfortunately the ship was hijacked while the Silurians were hibernating, and the Silurians themselves ejected.

After defeating the bad guy, the Doctor takes the ship to a remote uninhabited planet, which he chooses to name "Siluria". He deposits the dinosaurs there, and leaves evolution to take its course.

From the Tardis Data Core:

Siluria was a planet chosen by the Eleventh Doctor for the dinosaurs on the Silurian Ark to live on, after saving them from crashing to Earth in 2367. Brian Williams visited Siluria and sent back a postcard to Rory and Amy.

TL;DR: The Silurians evolved on earth. Some of them took dinos into space to avoid extinction. The spaceship was hijacked, Silurians killed. The Doctor save the remaining animals and took them to a new planet.

12
Did the Pandorica rebooting the Universe do weird things to Rory?
1
Is this Doctor Who story an allegory for the Middle East?
8
How did the Silurians lose their third eye?
2
Where did the Doctor get the vortex manipulator?
13
In Doctor Who, The Hungry Earth, how did Amy and Rory wave to themselves?
7
How did the Earth survive before The Doctor rebooted the universe?
8
How did Vastra and Jenny meet?
7
How did Amy and Rory not bring the Chen7 onto the TARDIS?
1
When did River Song tell Rory and Amy about the teselecta in "The Wedding of River Song"?