Does Neo have any back-story?

I would like to find more information about Neo, ideally something beyond the fact that he's a hacker and was destined to be 'The One'.

During the movie we can see some details about his personal life, for instance that he's a very lonely person, lives alone and that he has some books about philosophy (specifically "Simulacra and Simulation").

What isn't clear is about his family and background interests. Is there a complete biography for this character?

During the interrogation scene with Agent Smith, we see a file which contains brief details of Thomas Anderson prior to his involvement with Morpheus.

High School Record:
Anderson excelled in the sciences, mathematics and computer courses. He also displayed some aptitude for English and History. After some trouble with discipline at the age of 13-14, Anderson settled down to become a fairly well-regarded member of the school community. This was mainly due to an increased involvement in sports, especially football and hockey. 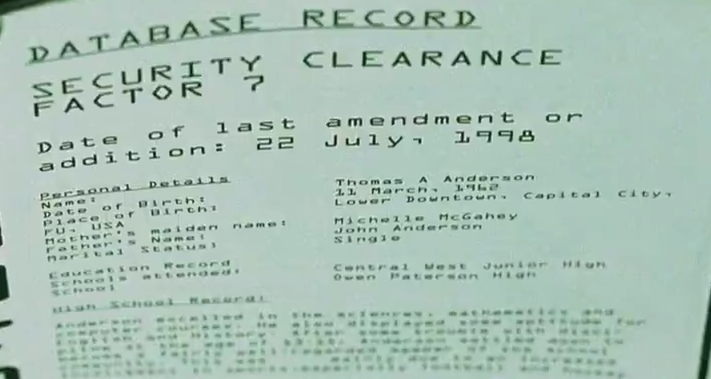 From the next sheet we get some idea of his work history, flitting from "job to job" due to his inability to cope with authority figures.

Thomas Anderson worked as a software programmer for a company in the Captial City in the Matrix. He moonlighted as a 'hacker', possibly exploiting personally-developed zero-day vulnerabilities. Much of this can be found here, which provides a good background of the life and family he had while still 'plugged-in'.

As for Simulacra and Simulation, that was a required read for people working on the story and on the set for the Trilogy. There are a lot of references to similar themes throughout the Trilogy and Animatrix.

32
How does 'seeing the code' help Neo?
22
Does Neo have the same abilities within the Construct program as he does in the Matrix?
26
Does Neo actually know kung fu?
41
Why does Neo jump into Smith?
16
Is there good canon evidence for the "Nightmare Matrix"?
7
When does Neo understand his choice?
62
Why did Neo even have to fight?
9
Why does Neo hit Ctrl+X?
5
How does Neo come back to life?
42
Is there a reason Agent Smith is trying to cut a deal with Neo?