Was Ned Stark using Ice during his fight against Jaime Lannister?

I saw a good reddit thread saying Ned Stark might not be carrying a huge sword as it might attract attention. Do we know if he was definitely using Ice? Alternatively, do we have any reason not to believe it wasn't Ice?

Both in TV series and books answers are appreciated.

In the book A Game of Thrones the great-sword known as Ice is not mentioned in the encounter between Jaime and Ned.

I have quoted select sentences from the full passage that details the fight.

"No!" Ned Stark screamed, clawing for his sword. Jaime was already cantering off down the street as he heard Wyl shout.

Ned galloped to him, bringing his longsword down on Tregar's helm.

Ned's sword is only mentioned twice and is never called "Ice" or even a "great-sword". Ice is always called by name or as a "great-sword", if not both in the books.

Ned was also mounted on horse in the books. It would be very difficult to wield a two-handed great-sword while mounted, so even if Ned had Ice on his person at the time of the fight, he would have wanted to use something more suitable for the situation. The only time we see Ice used is for executions.

Remember Valyrian steel swords are very rare and treasured. Not even the Lannisters have enough gold to make a lesser house forget their pride and honor to sell one.

I can't currently answer for the books, but in the show it appears he's definitely not using Ice in his fight against Jaime. If you compare Ice in the scene where he executes the Night's Watch deserter in S01E01:

And the sword he's using in his fight with Jaime in King's Landing in S01E05:

they're quite obviously not the same.

No, Ned was not using Ice during his fight with Jaime, he was using a normal arming sword.

In the TV series Game of Thrones, Ice, the Valyrian steel sword of Eddard Stark, is portrayed as a claymore-sized ceremonial blade (greatsword), which is so large that it requires Theon to hold the scabbard while he unsheathes it. 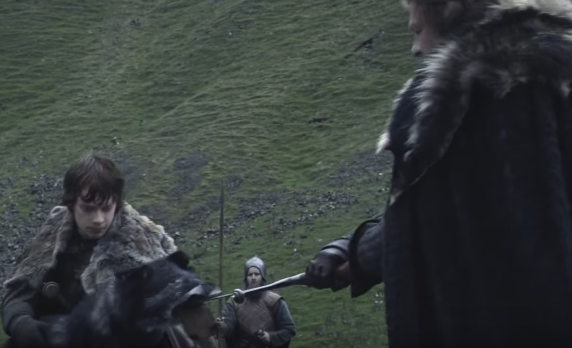 It has a lot in common with real medieval executioner's swords, except it has a point, which suggests that the show is trying to imply that the sword is ceremonial/symbolic, not for combat use. This is reinforced in Tywin's conversation with Jaime in Season 4, Episode 1

Tywin: The original weapon was absurdly large. Plenty of steel for two swords

The sword Ned Stark uses in his fight against Jaime Lannister (in Season 1, Episode 5) is a typical arming sword (he carries two on his waist in the scene before drawing one of them). 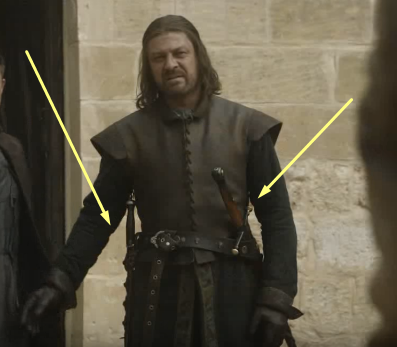 This was addressed out of universe by GRRM during a panel Q&A and is part of the So Spake Martin archives at Westeros.org. He states plainly that no, Ice is a ceremonial sword, not a battle sword.

Asked if Ned ever used Ice in battle. George points out it was a greatsword, very large and cumbersome, a ceremonial sword for beheading people more than a fighting sword, so he suggests that it was "probably too heavy and clumsy" to use unless you're the Mountain.

26
Why did Eddard Stark bring Ice to King's Landing?

27
Why did Ser Gregor kill Ser Hugh?
19
Who are the 3 men who would have a chance against Jaime Lannister in a sword fight?
90
Is there any proof that Jaime Lannister is actually a good swordsman?
7
Why would Tywin allow Jaime Lannister to fight in dangerous battles
11
How could Littlefinger possibly achieve his "endgame" in Game of Thrones?
10
Do we ever find out who sent the catspaw after Bran in the show?
13
How did Jaime Lannister know his new Valyrian steel sword was freshly forged?
7
Is Arya Stark the heir to House Whent?