White moons on orc helmets in Tolkien's Lord of the Rings: Return of the King

In Tolkien's book Return of the King there is a moment when the orcs start to put white moons on their helmets as the heroes begin to win decisive victories. Saruman had white hands on his orcs helmets. Is the white moon a change in allegiance to the new white wizard, Gandalf the White? Because they fear him more than Sauron at that point?

The moon & skull is a symbol of Minas Morgul.

I believe this is only described once in LOTR (Book IV Ch. 8, The Stairs of Cirith Ungol):

Two liveries Sam noticed, one marked by the Red Eye, the other by a Moon disfigured with a ghastly face of death; but he did not stop to look more closely.

This is one artist's rendition: 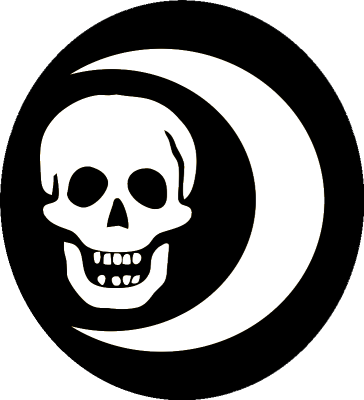 The moon is a reference to Minas Ithil, which means "Tower of the Moon," which was taken over by the Ringwraiths from the people of Gondor. The orcs stationed at Minas Morgul would have been using this symbol for many years. There was no change in orc loyalty during the events of LOTR.

The symbol is barely seen in the movie. This is the best shot I could find: 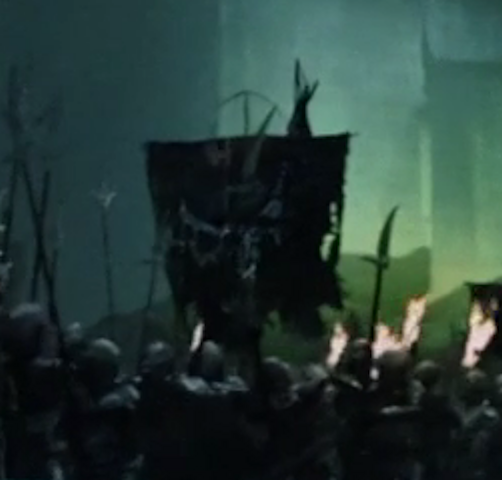 It can be seen when the armies of Minas Morgul are leaving the fortress. I'm not sure if it appears later in the movie.

Edit: The original cover of The Two Towers, drawn by Tolkien, sheds some light on what the symbol looks like. Minas Morgul is depicted:

However the symbol beneath it features a moon, but no "ghastly face of death". Perhaps this was the symbol of Minas Ithil that was modified when Sauron took it over. In any case, I think that it's a good basis for assuming that the moon on Morgul's symbol was indeed white, in Tolkien's mind.

73
During the War of the Ring did Sauron or Saruman actually win any major battles?
31
Who replaced Gandalf as the Grey Wizard?
61
Why didn't Gandalf know what the Palantir was?
18
What were Saruman's original intentions, and how did they change over time?
32
Why does Gandalf act in this way in the Houses of Healing?
10
What was the official plan for defeating Sauron?
22
Does Saruman invade Rohan to please Sauron, or is it a desperate last-ditch attempt to recover the ring?
6
What explains the Council's strategy with the Necromancer?