Where will the second Fantastic Beasts film be set?

Have any directors or producers released this info yet?

New York, London, and then Paris

Warner Bros. have confirmed that the new Fantastic Beasts film will be heading to New York, to London, and then on to Paris. The film is set in 1927, months after Newt helped in the capture of Dark wizard Gellert Grindelwald.

At the end of the first film, Newt leaves New York on a boat set for Europe. As principle photography began at Leavesden today, Warner Bros. revealed that New York, London and Paris will feature in the film.

Paris, France and the U.K.

This was first leaked by production designer Stuart Craig, during an interview with SnitchSeeker this past April.

SnitchSeeker: What should we look forward to with Fantastic Beasts? Because you’ve been working on that for the last year now?

Stuart Craig: Fantastic Beasts – there are hints and references to Harry Potter. It’s set in France, in Paris, in 1926. There is no script yet. The script’s being furiously written by the very prolific J.K. Rowling. And that’s all I can say about it – Paris, 1926.

Seeing as the first film takes place in mid-December of 1926, this would set the second film as a few days after the first, however Rowling has said this is not so (see below).

In October, director David Yates confirmed (during the IMAX Fan Event) that the sequel would be in a different city:

We next see Newt in another big capital city, and it’s not going to be New York, It’s somewhere else entirely.

And more recently, David Yates confirmed in the December 2016 issue of Empire Magazine that this city would be Paris: 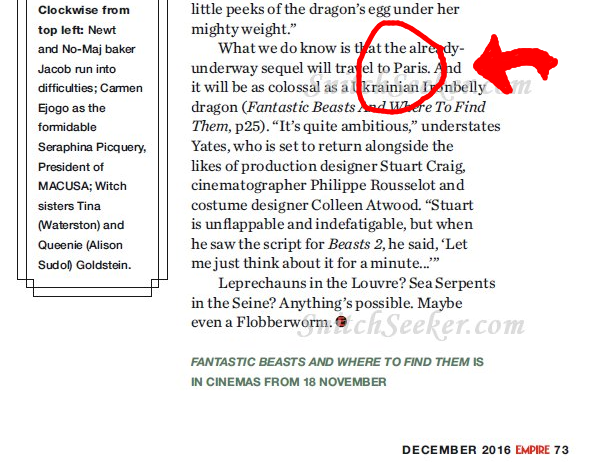 What we do know is that the already underway sequel will travel to Paris. And it will be as colossal as a Ukrainian Ironbelly dragon. “It’s quite ambitious,” understates Yates, who is set to return alongside the likes of production designer Stuart Craig, cinematographer Philippe Rousselot and costume designer Colleen Atwood. “Stuart is unflappable and indefatigable, but when he saw the script for Beasts 2, he said, ‘Let me just think about it for a minute...’”

Leprechauns in the Louvre? Sea Serpents in the Seine? Anything’s possible. Maybe even a Flobberworm.

Later, in November, David Yates clarified during the film's press junket that the second movie will also be set in the UK.

There have been a lot of rumors that the second movie is going to take place in Paris. Can you confirm or deny that?

David Yates: We confirm it.

Do you think the trend will continue that the other movies will be in different cities, countries – and will they go back to the UK?

David Yates: We do go back to the UK in the second film as well. So it’s in the UK and Paris. I’m not quite sure where Jo’s setting the rest of the movies. I think they’ll be European-centric, but I’m not sure yet because it’s still bubbling in her head.

David Heyman: We’re trying to figure out where we want to go on holiday. (laughs)

David Yates: The Carribbean would be good. I think it will be difficult to ignore America in this one, but the next one is Europe.

On Twitter, Rowling herself confirmed the Paris setting, and said that there would be sme time gap between the two films.

According to this artice from Hypable, it will be set in Paris, the capital city of France.

The Fantastic Beasts 2 setting was confirmed while he spoke with Empire Magazine for a recent cover story. “It’s quite ambitious,” Yates says of the sequel, “[Production designer Stuart Craig] is unflappable and indefatigable, but when he saw the script for Beasts 2, he said, ‘Let me just think about it for a minute.'”

The interview can be found in Empire magazine publish on October 27.

It’ll be mostly set in Paris, with small parts in the UK and USA.

The movie being located in Paris, New York, and London had previously been confirmed, but now there’s new information about the proportions of time that’ll be spent in each place - the movie will be almost entirely in Paris, therefore only leaving small amounts of time for the other places mentioned. In an interview with Entertainment Weekly, the executive producer of “Fantastic Beasts and Where to Find Them” as well as its sequel “Fantastic Beasts: The Crimes of Grindelwald” explains that most of the next movie will take place in Paris.

We asked executive producer David Heyman about conflicting reports online regarding the setting of Fantastic Beasts: The Crimes of Grindelwald. We know the film has scenes in New York (which were introduced in the first film), London (which we’ve seen in Potter films), and Paris (which we’ve never yet seen in the franchise). But there’s been some confusion about how much of the film is set where.

Since we know there was a casting call for young versions of Newt, Leta, Dumbledore, and Grindelwald (as well as someone named Sebastian), it’s likely that some if not all of the scenes in England could be flashbacks.

However, this doesn’t confirm those are the only three locations that will be seen in the movie. It’s also possible that there may be other locations visited that they don’t want to reveal because it would provide too much of a hint to the plot.

Not the answer you're looking for? Browse other questions tagged harry-potter behind-the-scenes fantastic-beasts the-crimes-of-grindelwald or ask your own question.