Short story about alien invasion with a twist.

I am looking for identification of a short story I read as part of an anthology around twenty years ago, and I think it might have been written by Harry Harrison but I am not certain.

Plot line goes like this: evil alien empire invade earth. They've done this many times, they know the routine. The populace resists, is crushed and turned into slaves/subjects of the empire, leader of the invasion retires to a life of luxury as colonial governor. I think the aliens look like humanoid snakes.

But Earth is different. When the invading force arrives, they spot no defenses, no military. When the ships land, the earthlings welcome them with open arms. The aliens are nonplussed and ask if the earthlings realize just what is going on.

Oh yes, the earthlings reply. But they point out that Earth doesn't have FTL technology and clearly the aliens do and could crush them if they resist. But by the same token they must have value, and other out there (whether pirates or other empires) may seek to take their planet by force and kill the populace. And if that happened, the empire would be forced to defend Earth as a valuable colony. Therefore it is in the Earthlings' best interests to be as valuable to their new masters as possible, not fight them.

The aliens point out that they could conceivably be defeated by this hypothetical threat. The humans shrug and agree, then point out that this would simply show that their new masters were even more capable of defending Earth.

Fast forward and the new planetary governor finds himself bored. He is chatting with his second in command who has just come in excitedly for having earned a black belt in human martial arts (I don't remember which one in particular, if it is even mentioned).

The governor is mystified, why didn't his lieutenant simply take this black belt? The lieutenant explains that without earning the belt, it would be meaningless. Instead, it required him to train and master the skill of human martial arts, which are curiously different from the aliens' own form. He explains via example:

In the alien martial arts, if one person shoves against the other, the second person seeks to shove back harder, thereby establishing might and dominance.

The governor thinks this sounds insane, ridiculous, and says a lot about a cowardly people like the humans.

Toward the end of the story, this comes back to haunt him. He suddenly finds that none of his men will respond to his command. A coup has occurred and the humans have slaughtered every alien on the planet except him. The humans simply bided their time until they had learned the secret of FTL, how to build and maintain a space navy, and in the meantime the occupying force had become soft and were easily dispatched. Now the humans are taking the navy back to the alien empire and aim to take it down. To replace it or to free the enslaved planets, I don't really remember.

The Raidans, aliens from Sigma Octantis, invade Earth. They might look a bit like humanoid snakes, based on this picture from the original publication: 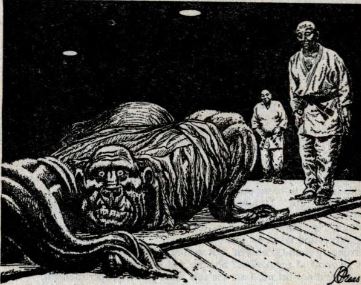 Zalumar, the leader of the invasion, is surprised by the humansâ€™ submissiveness:

â€śWe are going to assume ownership of Terra, lock, stock and barrel,â€ť emphasized Zalumar, still watching him. â€śWe are going to confiscate your world because the rewards of life belong to the most deserving. That is our opinion. We have the power to make it the only acceptable opinion. Do you understand me. Fox?â€ť

Fox shrugged philosphically. â€śEither you are cleverer than us or you arenâ€™t, one way or the other, and that is that. If you arenâ€™t, you wonâ€™t be able to conquer this world no matter what you say or do.â€ť

â€śI guess weâ€™ll benefit from your rule. You canâ€™t govern us without teaching us things worth learning.â€ť

â€śThis,â€ť declared Zalumar, with a touch of wonder, â€śis the first time in our history that weâ€™ve encountered so reasonable an attitude. I hope all the other Terrans are like you. If so, this will prove the easiest conquest to date.â€ť

At one point, the second-in-command of the planetary governor earns a black belt in a martial art:

Zalumar frowned. â€śThere can be no worth-while award on a world where anything may be confiscated.â€ť

â€śA Black Belt means nothing if merely grabbed,â€ť explained Heisham. â€śIts value lies in the fact that it must be won. I got mine at the risk of my neck.â€ť

He then reflects on the peculiarities of Terran fighting styles:

â€śI was caught napping by his extraordinary technique. This Terran wrestling is very peculiar.â€ť

Heisham sought around for an easily explainable example, said, â€śIf I were to push you it would be natural for you to oppose my push and to push back. But if you push a Terran he grabs your wrists and pulls the same way. He helps you. It is extremely difficult to fight a willing helper. It means that everything you try to do is immediately taken further than you intended.â€ť â€śThe answer is easy,â€ť scoffed Zalumar. â€śYou give up pushing. You pull him instead.â€ť

â€śIf you change from pushing to pulling, he promptly switches from pulling to pushing,â€ť Heisham answered. â€śHeâ€™s still with you, still helping. Thereâ€™s no effective way of controlling it except adopting the same tactics.â€ť

At the end of the story, the humans rebel, to Zalumarâ€™s great surprise. They then seek retribution against Raidan:

â€śTime will show. There wonâ€™t be much of it, either. Maybe we could build a super-fleet by combining the virtues of your ships and ours. But weâ€™re not going to bother. It would take too long. Weâ€™ll have learned how to bperate your vessels before another day has passed.â€ť

â€śThere will be no thousands from Raidan. Weâ€™re going to send those ships hotfoot after Heisham. Even if they donâ€™t overtake him theyâ€™ll arrive so close behind that the Raidan authorities will have had no time to react.â€ť

The title of the short story comes from the Raidanâ€™s mistake. They believed that the humans, because of their alien outlook, believed that everyone had the â€śbasic rightâ€ť to live as they chose, and that the humans had therefore accommodated their imperial fantasies. However, it turns out that humanity recognizes a different right:

â€śThe right that we recognize is that of every species to go to Hell after itâ€™s own fashion.â€ť

9
ID this 90's animated children's film about alien invasion to forest
16
Story ID: Alien invasion involving tripod-style walkers, force fields and a human resistance force
10
Short story where aliens ask for Earth's help and ends with an alien being glad the Earthlings brought their moon with them