I am looking for an old fantasy cartoon, most probably from the 90s. There were about 15 human heroes in it.

One was a Jewish king who had a weapon which he swung above his head and threw rocks from. I remember an episode where he or another character said how he fought off a few cyclops.

One hero was definitely a female warrior.

The heroes fought a reptilian king with black eyes and sharp black nails, possibly green skin and purple clothing. He was their main enemy.

There were episodes where the heroes participated in some kind of a fighting event held by the reptilian king. The heroes fought in an arena against snake-headed humanoids with green skin, every one of them were armed with 2 scimitars, they wore purple armor on their chests and had long necks. There were also some other animal-headed humanoids but I don't remember them very well.

Their eyes weren't black, but they looked like this: 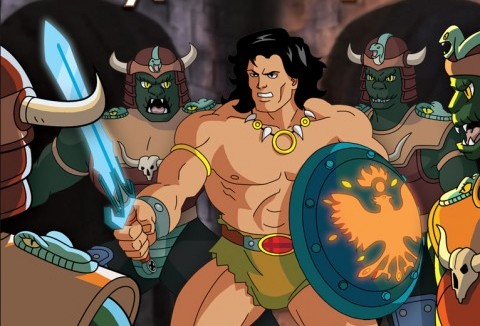 Another possibility is King Arthur and the Knights of Justice. When the evil witch Morgana captures the true King Arthur, a modern day college Football team is brought back to the past by Merlin to take their place, lead by their quarterback Arthur King. There are at least 10 distinct heroes with unique weaponry in this series. 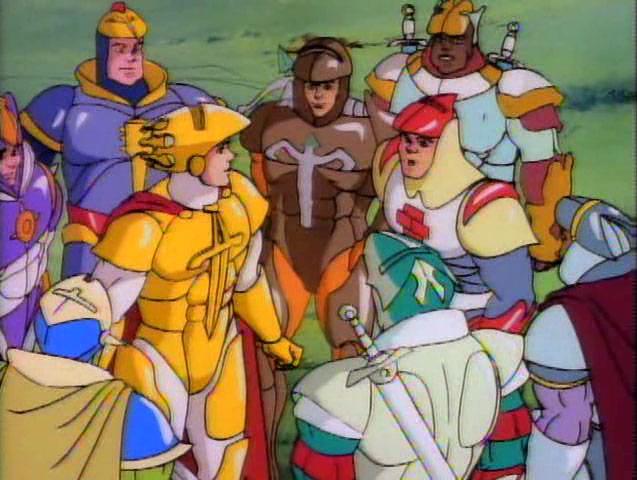 They have to face off against Morgana's animated stone warriors, including their ruthless leader, Lord Viper, seen here, who was snake themed and dressed in green: 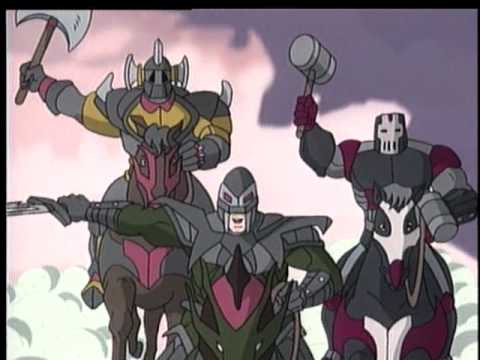 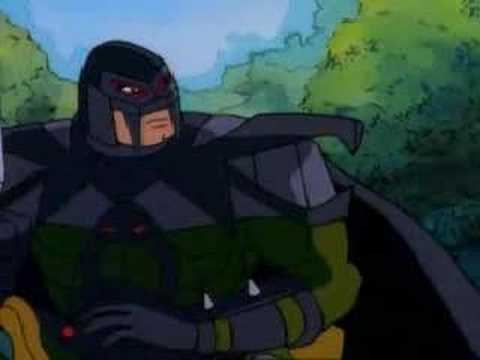 It's not a cartoon, but this kind of matches up to The Mystic Knights of Tir Na Nog, a series that aired in 1998.

Queen Maeve of Temra, to conquer the peaceful kingdom of Kells, enlists the fairy Mider, who gives her the mystical Rune Stone allowing Maeve to use sorcery, most often to create ogres and evil giants, whom she sends to wreak havoc. When King Conchobar of Kells seeks a way to protect his kingdom, protagonist Rohan, a druid's apprentice, goes in search of the prophesized hero 'Draganta', with his friend the reformed thief Angus. Later joined by the foreign Prince Ivar, and Conchobar's daughter, Princess Deirdre, they are drawn into Tir Na Nóg, whose king Fin Varra puts the group through various tests to determine their worthiness. The heroes having passed these tests, King Fin Varra gives them certain weapons granting control of the Classical Elements Fire, Air, Earth, and Water. Thereafter the four overcome Mider's 'Evil Sentinels' (recurring villains in the series) to capture corresponding suits of armor, and oppose the various monsters created by Maeve, assisted by the winged fairy 'Aideen'. Subsequently, Rohan gains a new partner in Pyre the dragon, who later identifies Rohan as Draganta. Later in the series, another Mystic Knight emerges in Prince Garrett of Rheged, who joins the others after they free him from Maeve's telepathic control. With her powers nearly exhausted, Queen Maeve summons the monster 'Lugad', who is more powerful than any previous creation; but he and Rohan are both identified as Maeve's abandoned sons. In the series finale, they co-operate with the other Mystic Knights to defeat Maeve, whom Rohan banishes from both kingdoms.

The guy with the mace is Angus.

Angus – Angus is Rohan's best friend and a well-known, boastful reformed thief who often gets into trouble. His weapon is the Terra Sling Mace which throws giant boulders and can cause earthquakes. To obtain his silver and gold Mystic Armor, he had to defeat the Rock Wolf of Temra. To don his armor, he shouts "Earth beneath me!".

Deirdre is likely the female warrior.

Deirdre – The princess of Kells. Her weapon is the Whirlwind Crossbow, which shoots a burst of air. To win her white and gold Mystic Armor, she had to defeat the Lightning Bat of Temra. To don her armor, she shouts "Air above me!". Deirdre is the most logical-minded of the Mystic Knights, and is therefore sometimes frustrated by her companions' foibles.