What is the first instance of teleportation using a machine (aka transporter) in Sci-Fi movies or TV?

I know of only a few uses of teleportation prior to Star Trek's (TOS) transporter that appeared in movies or TV shows.

What is the earliest example of teleportation by a machine, shown in a movie or on TV??

Those that I know of are:

I think there are others but do not know of any. Technically, it does not have to be a Sci-Fi movie or TV show but if it has teleportation it seems to come under that category.

There is another Outer Limits episode in the original series where several residential blocks (homes and home residents) were teleported from Earth to another planet but that was an incident merely to set up the story and it could have been executed by any other means, including space magic. In fact, even in item (3) of my list, the teleportation of Mr. Zeno as shown is incidental to the story and not existing as an actual machine like the movie The Fly and episode 1 of Outer Limits.

Anything that appears after the advent of Star Trek (TOS) is not of any interest to me.

This article indicates that both Buck Rogers in the 25th Century and Flash Gordon, in their serial formats, included some occurrences of matter transmission. I couldn't find specifics from Flash Gordon, but this article includes an actual frame capture of the teleportation machine used in the Buck Rogers serial of 1939, almost twenty years earlier than the Vincent Price version of The Fly. And, thanks to @WinchellChung, here's a video clip of that machine in action.

There is an very good article here, about the origins of the teleportation in sci-fi.

Perhaps the earliest recorded story a matter transmitter was Edward Page Mitchell's "The Man Without a Body" in 1877. In this story, a scientist invents a machine that breaks down the atoms of a cat and sends them by wire to a receiver, where the animal is reassembled alive and well.

The story can be found on this page.

There are a few cases over the next few decades, perhaps most notibly The Disintegration Machine 1927, by Arthur Conan Doyle

However teleportation seems to become quite popular in the 1950s appearing in several novels and short stories:

So certainly by the time Star Trek was created (1966), the idea of a transporter was well known in sci-fi.

The first known use of the word Teleport in a fiction story was published in the Hawaiian Gazette on October 23, 1878. 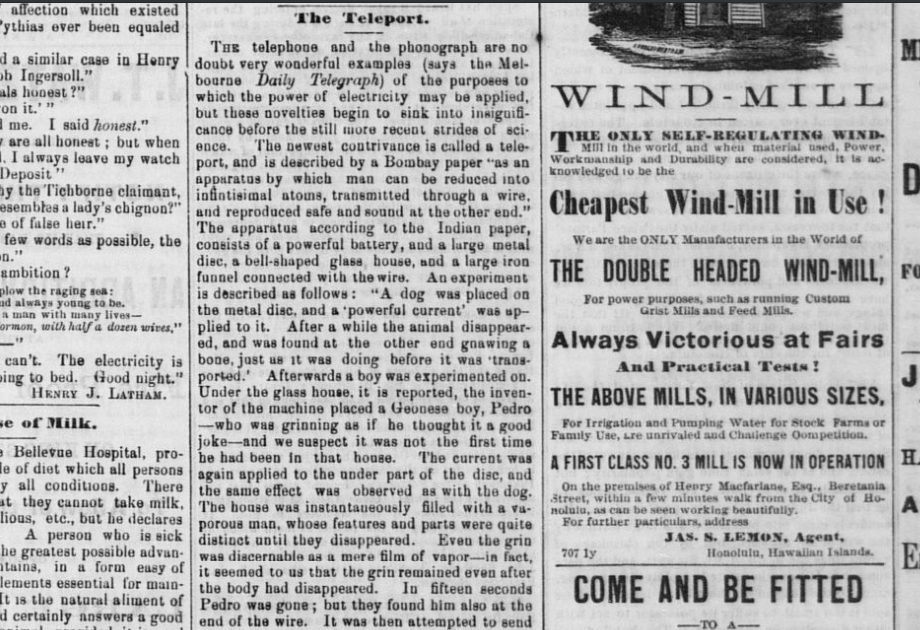 In movies the 1939 Buck Rogers in the 25th Century serial film adaptations of the comic books of the same name used teleportation instead of elevators.

The May 3rd, 1957 episode "The Phony Alibi" from "The Adventures of Superman" seems to have predated The Fly slightly, with a teleportation system that sends people over the telephone.

Stealing from the TvTropes Description:

Bungling Inventor Professor Pepperwinkle creates a system for transporting people through telephone wires. As usual with Pepperwinkle, a gang of crooks befriends the naive professor, then uses his invention for evil; they commit crimes in Metropolis, then phone themselves to distant cities and make sure plenty of people see them to set themselves up with a (seemingly) perfect alibi.

Disregarding the ones that you already have listed (As you say, the Outer Limits ones are semi questionable, and The Fly is probably the earliest appearance anyway), there are a couple of other candidates:

There are others around the same time frame, but all post date ST:TOS by at least a year or two.

The 1956 movie "Forbidden Planet" (at 4 minutes into the movie) has a teleport system used for 5 men. This was before The Fly or Star Trek.

Doctor Who featured a number of teleportation devices over the years. The first occurrence is in a 1964 story, "The Keys of Marinus"

Not the answer you're looking for? Browse other questions tagged movie tv history-of teleportation or ask your own question.

8
Which was the first sci fi story to feature self incorporated teleportation?