There was this great book I read (audio book) almost 10 years ago. I vaguely remember that it was something about human history for the next 10,000 years up to our extinction. I don't know the title. :( Please help!

I remember that it was a series of vignettes, short stories which individually tell about one event in this very long story of human exploration of the galaxy. These are some of the stories I remember:

Like I said, it was really good, but I just don't know the title. Thanks, BSD

Birthright: The Book of Man by Mike Resnick.

I reread my copy a few years ago, and found I was still quite fond of it. It definitely is the one you're remembering. The fragile crystalline aliens destroyed by a human tourist due to a malfunction in his containment suit, for instance. And all the other stuff you summarized. It paints a rather bleak picture by assuming that humans are far more aggressive about trying to conquer/colonize other people's planets than most (if not all) of the sentient alien races in this galaxy are inclined to be. 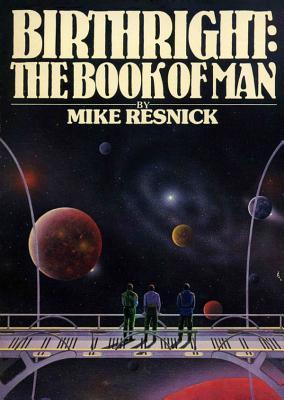 10
Book series about time travel from future to distant past, psychic powers?
12
Book about a single human growing up on a space station devoted to trade?
17
Trying to remember a book about a human male travelling to alien planet
6
Humans travel to earth-like planet to colonize but find peaceful aliens
7
90s (or earlier) sci fi book about demons being an ancient alien race
4
Book: human-centric galaxy