How dead do you have to be for the Lazarus Pit not to work?

This question is in regards to how the Lazarus Pit works. During an '80s Batman storyline, Batman turns Ra's al Ghul into ash and ejects him into space. Then, he later turns up, completely fine. If you can turn someone into ash and they can become a fully-formed human being again, how completely dead do you have to be for it not to work?

A long, long time ago, I reread every Ra's al Ghul appearance in my comic book collection as research for something I was writing at the time, which I creatively called "the Ra's al Ghul FAQ." As I recall, most of the canonical cases of "resurrection in a Lazarus Pit" seem to be cases more along the lines of "a few minutes, a few hours, or a few days after someone died, his body -- still largely intact, except for a bullethole or stab wound or whatever -- was dunked in a Pit, and he came back out in perfect health." But I don't remember any occasion when Ra's has made a detailed speech about exactly where the upper limits were on how much damage a body could suffer before it became impossible to resurrect in one of his convenient Lazarus Pits. (I would expect, though, that literally being cremated into just a handful of ashes would go far beyond the Pit's capacity to heal you.)

So you prompted me to look into it again, just now. In the extreme case that you mention from the 1980s (Batman Annual #8, written by Mike W. Barr), it later appeared that there had been some sort of misdirection taking place to confuse the issue of just what had become of Ra's al Ghul's body. When I saw your query, I remembered the ending of that story pretty well, and I remembered that the next time Ra's al Ghul was heard from was a few years later, in Batman #400, written by Doug Moench, but I couldn't remember, off the top of my head, exactly what excuse was offered for his latest return from the grave at that time.

I include a scanned image of the key speech by Ra's al Ghul. 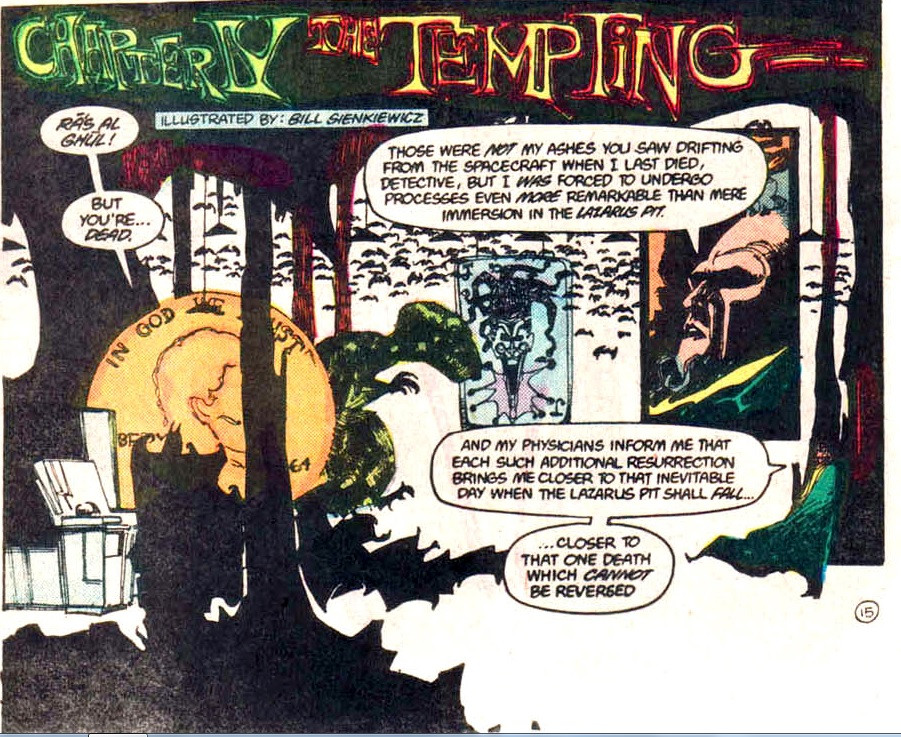 I also will type out the text of what he says here:

Those were not my ashes you saw drifting from the spacecraft when I last died, Detective, but I was forced to undergo processes even more remarkable than mere immersion in the Lazarus Pit.

And my physicians inform me that each such additional resurrection brings me closer to that inevitable day when the Lazarus Pit shall fail . . . closer to that one death which cannot be reversed.

In other words: According to Moench's retcon, Ra's al Ghul was not literally reduced to mere ashes at the end of the story you mentioned. Something else was going on -- which was not explained at the time, and even in Batman #400 is only being hinted at, as vaguely as possible, by writer Doug Moench.

But Ra's did, in fact, die in space on that occasion. And from the way he tells it, his faithful minions, who must have done something to revive him after they retrieved his mortal remains, knew darn well that a standard-issue Lazarus Pit was not capable of working its magic on whatever was left of Ra's al Ghul's corpse after that adventure in space. So I get the distinct impression they used some sort of Extreme Contingency Plan which had been prepared in advance for a Worst-Case Scenario.

After all, Ra's al Ghul has been running around for hundreds of years in the DCU; he must have had ample opportunity to carefully investigate other cases of other characters having died and returned by other means. (There have been plenty of times in DC's comic books when someone was dead, and then came back, without any mention of a Lazarus Pit as the excuse for it.)

17
Can the Lazarus Pits be used to reliably bring people back from the dead?
30
How does Bruce travel from The Pit to Gotham City?
12
Why did everyone in The Pit have to jump to their freedom?
25
How did the Bat-Signal work on cloudless/moonless nights?
5
In Batman: Arkham City, does Batman already know about the Lazarus Pit? (Spoilers)
1
How many time has Ra's al Ghul used the Lazarus Pits?
12
Is Alfred the moral conscience of Bruce Wayne/Batman?
4
What was Bruce Wayne’s alias in The Pit?
20
Did Batman ever tell Superman “the last time when you really inspired anyone was when you were dead”?