Was the SSR created for the MCU specifically or did it exist in the comics?

I know that in the MCU the SSR is the precursor to S.H.I.E.L.D. However, did it exist in any form in the comics?

The Strategic Science Reserve was invented for the Marvel Cinematic Universe. In the mainstream Marvel comics (Earth-616), Nick Fury worked up the idea for SHIELD after seeing HYDRA's exploits in World War II; eventually the UN found those plans, and presented them to the US, who formed SHIELD as a branch of the US government, in secret (even from Fury, at first).

The formation of the SSR during World War II is a pretty obvious reference to real-world clandestine groups, like the British Special Operations Executive or the United States's Office of Strategic Services, though those groups were more heavily involved in espionage than the SSR. The folding of the SSR and merging with the newly-formed SHIELD also mirrors the eventual folding of the OSS after the war; the OSS research branch became the Bureau of Intelligence and Research while the spy operations eventually became part of the CIA.

However, the SSR has appeared at least once in the comics, after it appeared in the movies. Spider-Gwen is an alternate-reality Gwen Stacy from what's been called Earth-65; in Spider-Gwen vol 2 #2, we see an Earth-65 version of the SSR that turns Sam Wilson into Captain America: 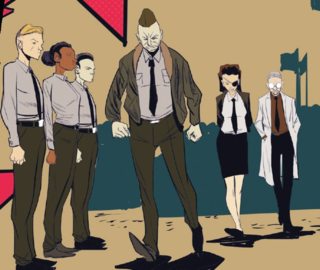 Not the answer you're looking for? Browse other questions tagged marvel marvel-cinematic-universe shield or ask your own question.

9
Does Marvel Comics exist in the the DC universe?
11
Does the Multiverse exist in the MCU?
12
Does Baby Groot exist in the comics?
10
Are there any references to the events of Guardians of the Galaxy 2 in other MCU titles?
27
Who created Rocket in the MCU?
9
Are all cloaking devices in the MCU based on the same principles?