Looking for a book -- purple grass on an "alien" planet

I do not recall many details about the story, however I do remember that there was a girl who was traveling (with her family maybe?) for quite a long time through space to find a new home. I believe there were multiple families aboard the spacecraft and, as I recall, their journey took several generations.

My most vivid memory of the book was when they arrived at what they thought was a suitable planet. They were looking for somewhere to settle and recolonize. The girl had on protective gear (including heavy "space boots") when she stepped out onto what appeared to be purple grass; the grass crunched under her feet like it was made of glass. She wore a helmet at first, but then realized that the atmosphere was suitable for humans). I seem to remember that she walked down the ship's plank alone, and may have even been the first to set foot on the planet. She started exploring the planet (again, I feel like she may have done this alone, but I really am not 100% sure) and eventually came across a strange village (although my memory of the explorations, finding the village, and everything after are unfortunately too hazy). I do remember, though, that when they initially found the planet, one of the factors that led them to determine that it might be a suitable planet is that they thought it was uninhabited.

I read this book in the early '90s in middle school - I believe it was required reading. I can't remember anything about the cover or binding. However, I do believe it was not a newly published work at that time. To my young adolescent brain, it felt like a "classic".

I have been looking for quite some time to no avail. I have asked a number of friends who are librarians and/or teachers, but no one seems to know the book.

I did see a similar question on here asking about a story with purple grass, and green/red skies & rivers. What is described does sound promising. However, I was unable to definitively locate my mystery story in the stories suggested in this previous question's answer.

Any help would be much appreciated! Thanks so much!

UPDATE: A few more possible details... I mentioned a "strange" village. I believe she thought it was strange by the way the houses looked. They were almost like large honey-colored pods. All in a row on either side of a dirt road/path. She did not see anyone at first in the village, so hesitantly began looking around. She eventually stumbled upon someone; I believe it may have been a native boy about her age. Although I cannot be certain, I believe he began to help her in some way, while keeping her existence secret from the others in his village -- I do not know how long, if at all, this secrecy lasted, or what he was "helping" her with. Like I mentioned before, my recollection of this is all very hazy. 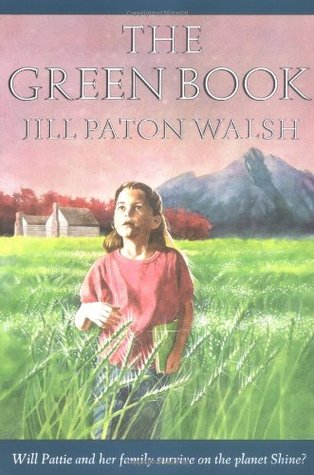 Pattie and her family are among the last refugees to flee a dying Earth in an old spaceship. And when the group finally lands on the distant planet which is to be their new home, it seems that the four-year journey has been a success. But as they begin to settle this shiny new world, they discover that the colony is in serious jeopardy. Nothing on this planet is edible, and they may not be able to grow food. With supplies dwindling, Pattie and her sister decide to take the one chance that might make life possible on Shine.

A longer review with more plot details can be found here.

12
Book series with travel to purple grassed planets and space pets
21
Looking for book - empathic/telepathic alien captured on distant planet, brought back to earth
4
Book - Young girl trapped on alien planet, makes friends with a higher-up alien
8
Young adult book about a boy(?) who gets sent through a portal to another world which is really the distant future
7
Pre-90s SF book, four characters (including Elney, Fram and Lady Cleetha) crash-land on an alien planet and learn to survive
7
Looking for short story set on alien planet where natives receive memories from brain ingestion