Don't know for sure but think this was a book as opposed to a short story...

Premise as far as I can remember: Cold war between US and USSR had reached the point that prohibited conventional war, so the countries would do things like get the youth hooked on heroin or taint the water supply, etc. The only other thing I can remember is that the book ended by the main character (I think he was a CIA operative) visiting a prostitute that turned out to be his daughter. Thanks in advance for any help!! 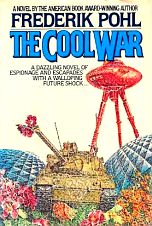 From a review on the Amazon link:

Unitarian minister Reverend Hornswell "Horny" Hake is forced to join a secret government cadre of dirty tricksters called "the Team" in this wry, futuristic spoof of a spy novel. Hapless Hake's total incompetence becomes apparent almost immediately when he is abducted by the mysterious Leota, who works for an underground organization dedicated to fighting the Team. This doesn't stop Hake from carrying out his first assignment: escorting an unruly bunch of teenagers on a tour of Europe in order to reduce worker productivity. This campaign is typical of the "Cool War" Pohl envisions in which nations engage in covert operations designed to make the opponent significantly less competitive economically without the kind of national culpability that might generate a military response. Hake finds himself well rewarded for his pains, but is troubled by the moral implications of his actions. In particular, he worries that the minor annoyances caused by the Team are hurting innocent people more than their governments. The intentional wastefulness of the Team goes against his long-ingrained distaste for what this resource-starved society calls "piggery", and in several subsequent encounters Leota asks him how he justifies his part in activities that seem so morally abhorrent and at the same time so politically meaningless. As Hake begins to act more independently, he falls afoul of the Reddi brothers, a pair (literally) of professional mercenaries who sometimes work with the Team, and other times work against it. Will Hake make his final stand for the Team, against the Team, or for himself?

7
Help finding title of book about planets containing essays and sf stories
4
YA Sci-Fi book series from Late 70s early 80s
8
90s (or earlier) book: humanity split between 3 factions (China, America, Russia) which colonized space, and have telepaths/telekinetics individuals
6
I need help finding the title of a Sci fi book about psychic aliens on a forsaken planet
13
A story where technology is forbidden, but used by priests
12
Help finding a sci-fi book with a small space ship