Who was the first comic book artist to use Toad's slime in comics after the first X-Men film was released?

When Toad first appeared in the X-Men back in 1964, his only mutant ability involved super-strong legs that allowed him to leap great distances. As the years went by, his mutation was enhanced and he gained a prehensile tongue, among other mutations.

When the first X-Men film was released, he displayed the ability to spit an adhesive slime, which he used on Jean Grey, nearly suffoating her to death. While this was the first time Toad had displayed this power, it migrated over into comics. My question is who was the first artist to do this? Any and all input is appreciated.

The first mention of it I've found is Wolverine (2nd series) #167. Salvador Larroca was the Penciler, Danny Miki was the Inker, and Liquid! was the Colorist. 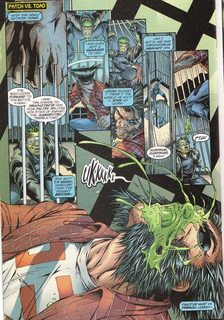 Before Logan can attack first, Toad delivers a kick to Logan’s face and retreats through a hole in the cage and into the bottom cage. When Logan gives chase and reaches the floor of the bottom cage, Toad spits a sticky green substance into his face. Peeling it from his skin with his claws, Logan tells Toad that was disgusting. Toad replies that he’s sorry he doesn’t approve, perhaps this ability will be more to his liking.

10
Is there a set limit on mutant abilities, where they're deemed too unrealistic?
3
Where does Toad's slime power come from?
3
How come Mimic needs glasses like Cyclops?
3
Why doesn't Toad slime Storm in X1?
3
Is Jean Grey the only person Toad has slimed?
7
Who was the first person to be slimed by Toad?
12
Is the first X-Men film the only time Jean Grey has been slimed by Toad?
1
How Did Cyclops Know the Exact Intensity to Set His Visor To Shatter Toad's slime Without Harming Jean Grey in X1?
3
Is Ice Man [Bobby Drake] an only child?