Teenage boy travels to Scotland to settle his family's curse. Alternately helped and hindered by a girl from the rival family. Smoked fish?

This is another one of those cases where I don't remember sufficient details to say for certain if this is fantasy or not. It was a young adult book. I'm pretty certain I read it in hardback somewhere in the mid 1990s in the United States as a library book. The main character is a teenage boy from the United States whose family is under the sway of a deadly curse (I believe they keep dying in accidents). He is the last remaining male of his family and so he travels to Scotland to find something related to breaking the curse, possibly the ancestral home. While there, he meets a redheaded teenage girl who seems oddly tied to his quest. At times she seems to be helping him and sometimes she seems to be fighting him.

Eventually, he learns that she's part of a rival family, possibly part of the family curse, and is under orders by her uncle, who's trying to kill the boy. The "curse" is due to a betrayal by ancestors in the two families.

Near the end of the book, they find the place important to his family history, wherein he's seeking a treasure. He learns the truth about the girl, but she decides to side with him. I think there was a treasure they were looking for.

For some reason, I want to say that it had something to do with smoked fish, maybe herring... they find a barrel of it and initially it seems like it's one of those worthless "the treasure never existed except in legend" situations, but it actually turns out to be the key to him acquiring the family fortune, which was in the fish business. Oh, and the girl falls for him although I don't think it went any further than a kiss. This ends the curse, although I don't remember if it was something mystical or a matter of that the uncle is put out of commission and the girl decides she likes him.

The only other detail that sticks in my head is that one of the first times he meets with the girl is after he stays in a local inn as he begins his journey. I've tried searching on the details I remember, but all I seem to get are Romance novels about handsome men in kilts.

Drawing a Blank: Or How I Tried to Solve a Mystery, End a Feud, and Land the Girl of My Dreams by Daniel Ehrenhaft, Trevor Ristow (Illustrations) 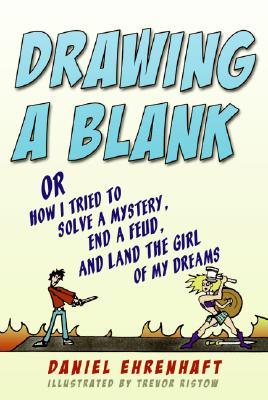 I don't know how this happened

One day I'm snug in my loner existence at Carnegie Mansion School, and the next I'm tramping through the Scottish wilderness looking for my dad. Who's been kidnapped. Because of a feud that started in medieval times. Or something. Suffice it to say, I never paid too much attention because I thought the whole thing was some twisted figment of my dad's imagination.

Now my only company is a wannabe cop who just might be my superhero dream girl. And if I don't deliver some piece of mysterious "proof" to the kidnappers, my dad is toast. I've got my fair share of issues with my dad, but I don't really want to see him burned to a crisp.

This is not the first time I've been wrong about something.

It kind of reminds me of Girl of Nightmares by Kendare Blake.

Some overlap although I do NOT remember any herring, nor that kiss.
Anyway no Scottish romance:

Cas is a ghost hunter of sorts. He uses his father’s knife to “kill” ghosts and set them free from the cycle of violence they are stuck in. He is obsessed about a ghost called Anna who has disappeared into some kind of nasty afterlife.

He is lured to England by an order who wants the knife back. On their way a girl called Jestine, who is connected to the order first attacks, then helps. The knife is both a doorway and a priceless treasure. The book ends with a ritual that should help the ghost Anna but also may kill both Cas and Jestine.

It is the second book of a duology and classifies as a ghost story.

3
Collection of ghost-stories for children/young adult
2
Name of book about teenage boy from the future
7
Book about girl who learn she's a clone?
1
Cartoon/anime where a girl turns to stone and the boy has a “hoverboard” and travels around with her body
4
Girl finds new world in mere pool?
5
Book about a girl with magic and a boy a with curse
3
Sci Fi book about a girl falling from space onto a polluted Earth and is trying to repair a ship to get back
5
YA fiction about a teenage boy who's turning invisible, sees the seamy underside of his town as a result
8
I’m looking for a book about an orphan girl who is found by a boy and his uncle