Why would in-galaxy dialing need to account for stellar drift?

Samantha Carter explains in the pilot that because of the expansion of the universe, stars are moving away from each other and a correction needs to be made to the dialing protocol to account for this. She further states that dialing for nearby gates (such as Abydos, and later we learn also Heliopolis) is unaffected since stars further away are receding from earth more rapidly than nearby stars. However, isn't the expansion of the universe observed between galaxies clusters and not between individual stars within a galaxy? The stars of the milky way are not receding from each other, they are all at a (roughly) fixed position relative to each other as they orbit the supermassive blackhole at the center of our galaxy. So why would any correction need to be made for dialing between gates in the milky way?

(And further, the expansion of the universe is an effect seen at even larger distances than galactic clusters, so one wouldn't think this effect impacts dialing within the local group; therefore, not meaningful even for dialing to Pegasus. Though, of course, galaxies in the local group are moving relative to each other... a fact we will be painfully aware of in 2.5 billion years when the Adromeda and Milky Way galaxies collide.)

Edited to Add: Certainly stars in the galaxy are moving relative to each other, and this might well account for some of the addresses not working. However, Carter and Daniel Jackson explicitly state that it is the expanding universe causing the dialing to be off, which is why they can (relatively) easily correct for it:

Carter: According to the expanding universe model, all bodies in the universe are constantly moving apart.
...
Jackson: But why does it still work between Abydos and Earth?
Carter: Abydos is probably the closest planet in the network to Earth. I mean, the closer they are, the less the difference in the relative position due to expansion. The further away, the greater the difference.

If the adjustment had to do with intragalactic stellar movement, then closeness to Earth would not be as relevant. (Though, of course, the closer to Earth the less likely some other massive body has passed into the path between Earth and the other planet which might make it less likely that an adjustment is needed in dialing).

Also, I discount things like the motion of the planet around it's star since this would have impacted dialing Abydos and Heliopolis as much as anywhere else over thousands of years (presuming they orbit their stars at speeds at least comparable to that of earth, which seems reasonable given that their environmental conditions are very similar to earth).

Despite their apparently fixed location in the night sky, stars are actually moving fantastically fast. Our sun is moving 10 miles per second toward the constellation Hercules. Targeting our sun at a distance would be quite a feat after a light year or two of distance begins to separate us.

Stars are actually moving not only in rotation with galactic movement, they are also moving in relationship to each other, depending on how they formed, where they formed, how they have been affected by gravitational influences of other stellar bodies, including black holes, dark matter and other high mass stars. The study of stellar movement is called kinematics 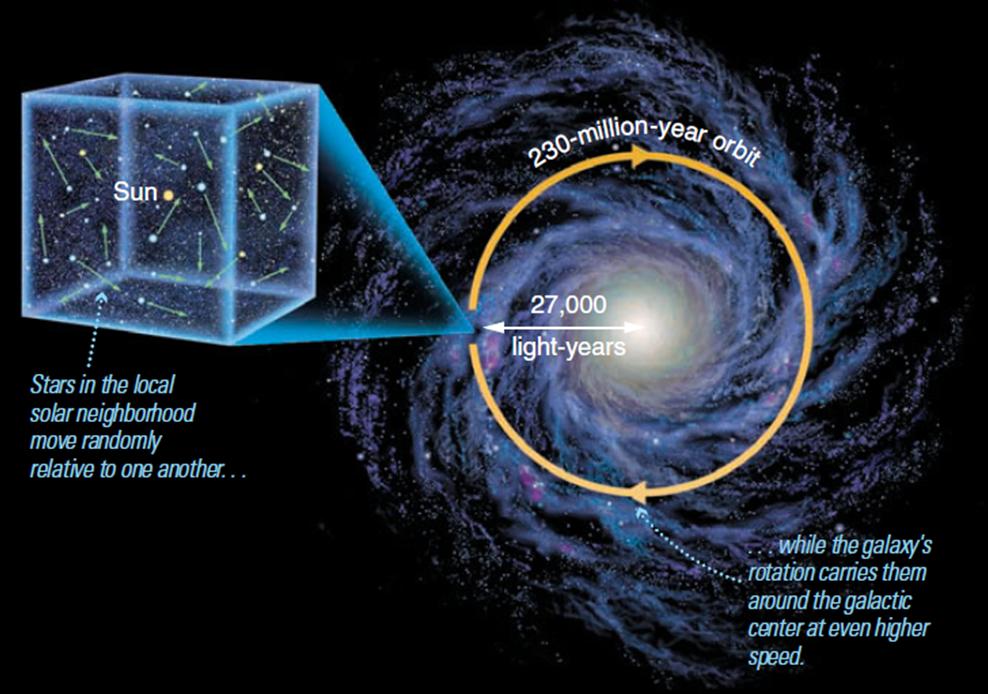 For reference, a galactic year is estimated to be 225–250 million (solar) years, but as the galaxy is big this is still fast. The Sun's velocity in the galaxy is around 220km/s (kind of a average with everything else moving). Compare to Earth's orbital velocity ~30km/s.

Stellar movement can be affected by their planetary bodies as well, depending on how close an orbit they have, whether they are double stellar units and how close they are to the galactic core. Any system that was designed to deal with linking two places together by analyzing the gravity wells of stars, creating synchronized, dedicated wormholes between those two stars to tiny receivers on planets within that gravity well would need to compensate for:

From the Wikipedia article on stellar drift:

Nothing in space stands still—more precisely, standing still is meaningless without defining what "still" means. Most galaxies have been moving away ever since the Big Bang, as explained by the metric expansion of space. Galaxy motion is also influenced by galaxy groups and clusters. Stars orbit moving galaxies, and they also orbit moving star clusters and companion stars. Planets orbit their moving stars.

Basically, galaxies aren't a static object - everything is shifting around. It's slow enough that Earth dialing computer could still dial most planets without accounting for the stellar drift since Ra left earth, but travel through the resulting wormholes wasn't exactly comfortable.

It's worth noting that stellar body are moving apart for a variety of reasons. In fact the moon is moving away from the Earth at a rate of 3.8 cm per year, And the Earth is moving away from the Sun at a rate of 15cm per year. It wouldn't be just a matter of adjusting for the expansion of the Universe. Stargates would need some pretty broad parameters for getting a lock....The margin of error would have to include the maximum distance between 2 given planets at any point in there orbital path.

25
Why did The Ancients not include the remote dialing feature in the Milky Way Stargates?
11
Why did Daniel have to negotiate with the Russians for a DHD?
13
Why Would the Wall on Abydos Have Coordinates Instead of Stargate IDs?
14
What Was the Rationale of the Ancients for Eliminating Manual Dialing of Pegasus Stargates?
14
How can the Stargate symbols represent constellations?
7
Is it impossible for Earth Stargate be modded to dial all Stargates?
5
Why would "Cor-Ai" be earlier than "Singularity"?
6
Are the Stargate glyphs different between Pegasus and Milky Way galaxies and how does it affect the DHD on puddle jumpers?
10
Could the Destiny crew make a pseudo-gate bridge?
7
What is the rule for spinning the ring when dialing a Stargate?