Movie about underground creatures that attack during eclipses

I saw this movie recently, on the Sci-Fi Channel in 2016. In the movie, scientists drilling in the ground release creatures that attack during every eclipse. One of the characters is a man who takes his son and heads to his uncle's bunker. 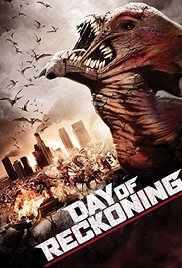 You can find a description in this review:

During an eclipse, subterranean creatures unexpectedly rise from underground and swarm the globe attempting to exterminate mankind. Militaries of the world eventually battle back the monsters during the daylong event, which comes to be known as ‘The Day of Reckoning.’

15 Years Later – With the world bracing for another eclipse and possible creature attack, David Shepherd picks up his teenage son Tyler from his ex-wife Laura for weekend visitation. When word later breaks that an attack is imminent, Tyler sneaks away to a skate park to make sure his girlfriend Maddie is safe.

While arguing over their next course of action and who should drive, a creature kills Milton. David, Laura, Tyler, and Maddie make it to another vehicle and head to the desert outside Barstow, where David’s Uncle Ted has a fortified bunker.

26
He is a wolf during the night and she is a crow during the day
9
Mad Max-type Sci-fi movie from the mid-80's with fat blob men
7
Movie with a dragon born in an underground laboratory
10
Horror film with a pregnant woman strapped to a bed and creatures that don't like light
5
Movie Identification - 80s Ghost Romance Involving A Medieval Castle?
7
Movie called “Predator” or “Predator 5” with Predator-like creatures inside of people
20
Movie where some soldiers go into a bunker in a city because of dangerous conditions outside