Who wrote the first SF story in which a time-traveler went back to the days of the dinosaurs?

I suddenly wondered: When was the first time that any science fiction writer published a story in which one or more human beings use some form of "time travel technology" to travel back to the era of the dinosaurs, and thus come face to face with one or more dinosaurs, as part of the plot?

I don't care if it was a short story or a full-sized novel. I don't insist you name a story that is still popular today, and gets reprinted on a regular basis. I just want to know who used this exact plot device first, along with the title of the story in which he (or she) did it, and thereby started a trend! (Heck, if it was first used a hundred years ago, in some old silent movie that I've never heard of, instead of in a work of prose fiction, then calling that movie to my attention would be a valid answer!)

Examples of What I Do Not Want:

It is at least speculated by the narrator that the great grand-daddy of them all, The Time Machine by HG Wells (first published in 1895), may be an answer to your question. At the end of the book the Time Traveller disappears with his machine, and the narrator muses thus:

It may be that he swept back into the past, and fell among the blood-drinking, hairy savages of the Age of Unpolished Stone; into the abysses of the Cretaceous Sea; or among the grotesque saurians, the huge reptilian brutes of the Jurassic times.

@user14111 made a suggestion in a comment: 'John Russell Fearn's "Liners of Time" was published as a 4-part serial in Amazing Stories for May, June, July, and August of 1935.' I picked up a DVD with a bunch of Amazing Stories scans on eBay here, which included the May and August 1935 issues, and it turned out that the section with the characters traveling back in time and encountering some prehistoric reptiles was in the May 1935 issue. Here's a screenshot of page 56: 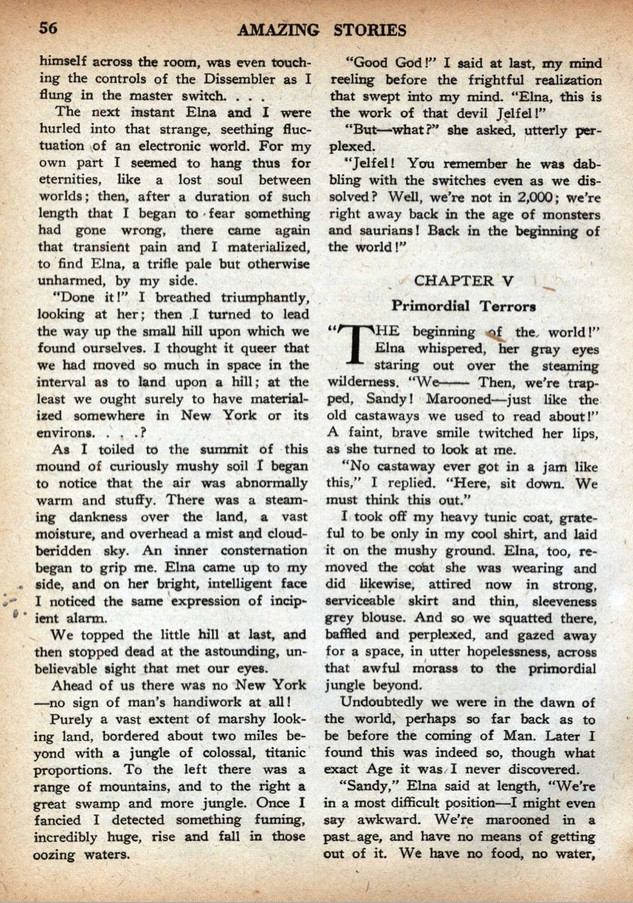 The paragraph right before Chapter V says "we're right away back in the age of monsters and saurians!", and the second-to-last paragraph on this page says "Undoubtedly we were in the dawn of the world, perhaps so far back as to be before the coming of Man. Later I found this was indeed so, though what exact Age it was I never discovered." 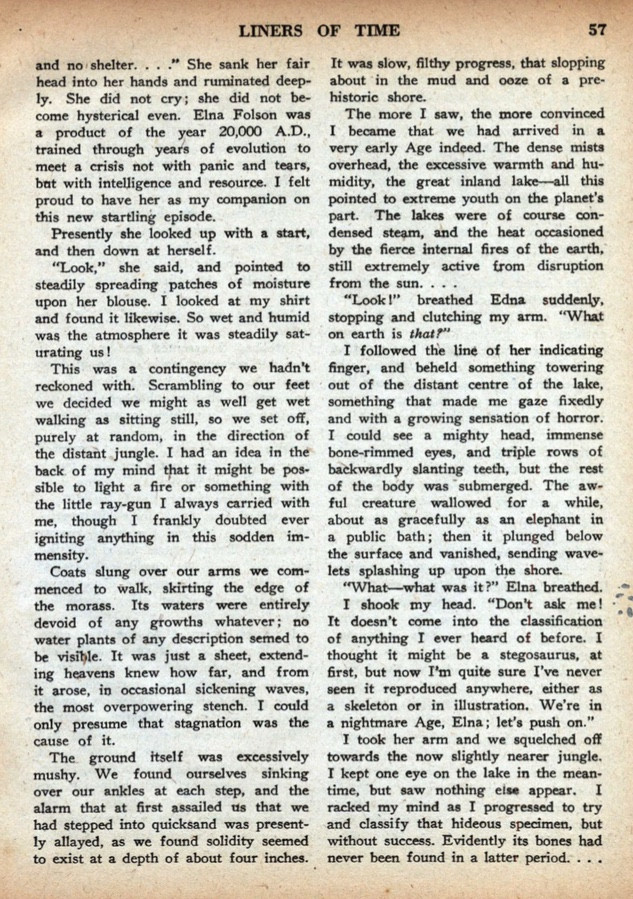 In the right column we find a description of a prehistoric reptile, with "a mighty head, immense bone-rimmed eyes, and triple rows of backwardly slanting teeth", and the narrator says "It doesn't come into the classification of anything I ever heard of before. I thought it might be a stegosaurus, at first, but now I'm quite sure I've never seen it reproduced anywhere, either as a skeleton or in illustration." 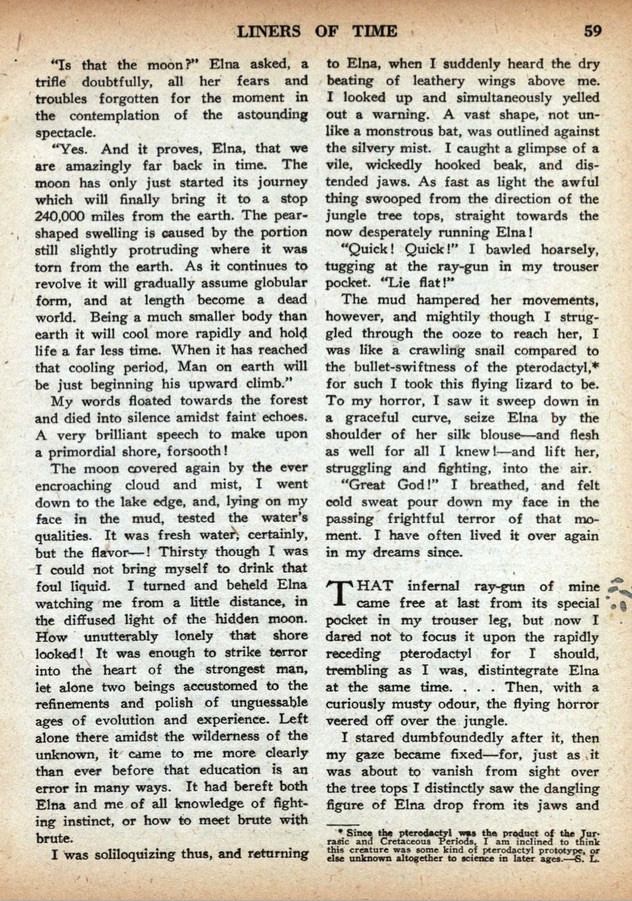 In the right column of this page there is the description of a flying creature "not unlike a monstrous bat" with "a vile, wickedly hooked beak, and distended jaws". Then a couple paragraphs down he says "I was like a crawling snail compared to the bullet-swiftness of the pterodactyl,* for such I took this flying lizard to be." And the asterisk leads to a note at the bottom of the page which says "Since the pterodactyl was the product of the Jurassic and Cretaceous Periods, I am inclined to think this creature was some kind of pterodactyl prototype, or else unknown altogether to science in later ages".

For a full plot summary, see pp. 117-118 of Science-Fiction: The Gernsback Years which are available on google books here. And the full story is available as a novel on amazon, though I don't know if it was edited at all from the original serial publication.

Maybe the story "The Beetle in the Amber" by Joseph W. Skidmore, Amazing Stories, November 1933. It's summarized on p. 384 of the reference book Science Fiction: The Gernsback Years which can be read on google books here:

Donald Cromwell and his wife Joane are experiencing marital strain as a result of Joane's fixation on an amber bead containing a large fossil beetle. The mystical philosopher and scientist Oliver Kent proposes to resolve the difficulty by sending them back to the period of amber, via reincarnation, akashic record, or what have you. Donald and Joane awaken (with both ancient and modern memories) in the body of primitives of a million years ago; they are hairy, and their arms are so long that their hands dangle below their knees. Outlawed from their tribe because they married without the chief's permission, they were deposited in the territory of chief Kalo and his sun worshippers, who are now pursuing them. When a pterodactyl attacks them, Donald sacrifices himself to save Joane, who is then captured by Kalo's men. When she rejects Kalo's advances, she is sentenced to die by the bite of the death beetle. The beetle is standing there looking at her, when a glob or resin falls upon it, sealing it off. The portent is so remarkable that Kalo and his men dash away. Joane and Donald awaken, the trauma released by their experience in the past.

Although "mystical philosopher" might suggest fantasy, it also calls Oliver Kent a "scientist", and the "The Oliver Kent" stories are mentioned on this list of time travel fiction, where Kent is described as a "super-scientist"; I suppose one would have to read the stories to decide which description is more accurate, and whether Kent tried to give any scientific-sounding justification for how he was able to send their minds into the past. And even if he's more like a super-scientist, it may be ambiguous if this fits your criteria since this seems to be mental time travel. However, the line "with both ancient and modern memories" at least suggests they aren't merely passively witnessing the experiences of primitive people in the past, as does a line from either Donald or Joane quoted in the opening of the review, "From the looks of that Brontosaurus. . . we are in the Pleistocene period." And the presence of a Brontosaurus and a pterodactyl suggests the age of dinosaurs, although it isn't actually accurate to have dinosaurs in the Pleistocene, and of course dinosaurs and primitive humans didn't coexist. Still, it might fit your criteria.

1952: A Sound of Thunder, by Ray Bradbury, is about a man who hunts dinosaurs, carefully chosen by the business that takes him back in time. It's a very good story, I encourage you to read it.

Adventures in Time and Space 1946 by Raymond Healy and J. Francis McComas contains the story "The Sands of Time" (1937) by P. Schuyler Miller.

The hero travels back in time to the age of dinosaurs and encounters space aliens, If I remember correctly. At one point narrating his story he tells a paelenotologist of glimpsing what looked like a brontosaur in the distance and is told there weren't any brontosaurs in that era. But various species of sauropod dinosaurs that looked sort of like Brontosaurs ere common for a hundred million years or so in real life. I don't know if this as the first time travel and dinosaur story ever written, but it was in the first science fiction anthology I ever read and was the first one I ever encountered.

The Shadow Out of Time is a novella by American horror fiction writer H. P. Lovecraft. Written between November 1934 and February 1935, it was first published in the June 1936 issue of Astounding Stories. - Wikipedia. The protagonist is forced to switch bodies with an eldritch abomination living in Earth's Paleogean past (actually a member of Earth's fauna that was completely "taken over" by technologically advanced aliens from the planet Yith).

1931: The Exile of Time, part 2 of a 4-part serial by Ray Cummings, in Astounding Stories, May 1931, available at the Internet Archive. Travelers in a speeding "time cage" zip through the age of dinosaurs in a couple of paragraphs. Probably not exactly what you're looking for, since they don't "come face to face with one or more dinosaurs, as part of the plot." But it does fit the title of your question, so I guess it's worth a mention.

We sped through a period when great lush jungles covered the land. The dials read 350,000,000 B. C. The gray panorama of landscape had loomed up to envelope our spectral, humming cage, then fallen away again. The shore of the sea was constantly changing. I thought once it was over us. For a period of ten million years the blurred apparition of it seemed around us. And then it dropped once more, and a new shore line showed.

The Time, to Mary Atwood and me, was a minute—but in those myriad centuries the higher mammals had risen to the anthropoids. The apes! Erect! Slow-thinking, but canny, they came to take their place in this world among the things gigantic. But the gigantic things were no longer supreme. Nature had made an error, and was busy rectifying it. The dinosaurs—all the giant reptiles—were now sorely pressed. Brute strength, giant size and tiny brain could not win this struggle. The huge unwieldy things were being beaten. The smaller animals, birds and reptiles were more agile, more resourceful, and began to dominate. Against the giants, and against all hostility of environment, they survived. And the giants went down to defeat. Gradually, over thousands of centuries, they died out and were gone. . . .

I don’t know if this was the first story of its kind, but it’s an early story and it matches the requirements in the question (no fantasy etc.). The story starts as follows:

“I see by the papers,” I said, over my beer, “where the new time machine at Stanford has been sent forward in time two days with a white mouse inside. No ill effects.”
Jack Trent nodded gravely and said, “What they ought to do with one of those things is to go back a few million years and find out what happened to the dinosaurs.”

Later on a triceratops is mentioned explicitly:

“How did you get away?”
“I wouldn’t have, if they hadn’t sighted a triceratops at that moment. […]”

Big Game was written by Asimov in November 1941, but it was rejected by Astounding’s editor John Campbell and only published in 1974. An expanded version called Day of the Hunters (ISFDB, Wikipedia) was published in 1950.

Not the answer you're looking for? Browse other questions tagged time-travel history-of dinosaurs or ask your own question.

9
Story about time traveler who comes back to download peoples consciousness before they die
8
SF Novel About Evolved Dinosaurs in Cylindrical Spaceship Coming to Earth
4
Fiction novel involving time traveling dinosaurs that then destroy humanity
7
R.A. Lafferty? Story about ship going back in time
4
Book like Time Safari with invisible and sentient dinosaurs
40
Time travel short story where dinosaur doesn't taste like chicken
3
First use of a fossil vertebrate footprint in speculative fiction