A father goes missing in the asteroid belt, his ship is taken back to Earth and his son returns to the asteroid belt to look for him and finds a hollow asteroid that's a ship. I read it over 40 year ago, so somewhere before 1976.UPDATE, I think he had a friend or his brother with him, when they fist landed on the Asteroid they got out to look around, somehow the ship drifted off and they use their O2 tanks to reach the ship. they find a way inside and find few people inside in the middle of the asteroid in a area big enough to have fields and animals. the boys find their father after long search. That all I can remember, but there is a second book where the boys go to Mercury and find little people about a foot tall.

The Forgotten Star by Joseph Greene, 1959. The first in the Dig Allen series. Actually, his father's ship is found drifting in the asteroid belt with no one on board, and Dig is told about it; I don't remember whether the ship was brought back to Earth. And the asteroid is ... Eros! 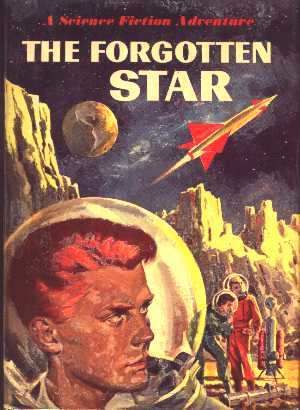 Here is an exciting tale of action and suspense, set in the world of tomorrow. As the story opens, two brothers, Jim and Ken Barry, are traveling by space ship from Earth to a new city on the moon. Aboard the space ship they discover a stowaway, young Dig Allen. Almost at once the three youths are plunged into an adventure that threatens to spell destruction for them all.

Dig has set out to find his father, a space scientist who mysteriously disappeared months before. The Barry brothers agree to help Dig. Their search takes them to the "Graveyard of Space" and to Mars. There they meet Old Dorkas, the one person who is able to decipher the last message received from the missing man. Finally, the boys are forced to set out along in an unauthorized space ship. They soon find themselves marooned on a weird, forgotten world at the outer edges of the solar system where unknown to them, their greatest adventure is about to begin!

4
A book about a boy searching for his missing father, the spaceship navigator
3
Book Title ID- Asteroid with Time Traveling Tunnel?
14
Book about mankind entering the space age and their first contact with two civilizations in sol
10
Looking for tv series title about space ship hidden on earth
10
(Recent?) book or series? - Young woman pilot wins old space freighter in a gambling game
8
Gambling Hells in an asteroid belt
8
Looking for 50s or early 60s juvenile book about boys 13 and 15 going to other side of moon and saving a civilization there
10
Sci-fi horror short story about explorers on a Lovecraft-inspired asteroid
12
Sci-fi book about a shape shifting machine wandering the surface of a planet sized space ship