I am trying to find an old cartoon, I remember it was about a young girl, possible a princess who was protected by a red robot on her journey.

I also remember that her father (I think) created two robots, one was red and one black, and he give them a test to see which one could protect his daughter. The red robot was chosen, but the black one (I believe he was stronger) tries to stop the princess from getting where she is going. The black robot sends various robots after them but they are defeated by the red robot.

I can't remember any names, but I think that most of the action happens in a desert, there are not a lot of interactions in this cartoon, mostly the girl and the red robot traveling together and fighting other robots.

The girl might have been just the daughter of an important scientist (who created the two robots) and not a princes. She is young, probably a 10 years old.

I found a similar question here where they say it is Zentrix, a 3D Chinese animated series, with an emperor scientist who has a daughter. The promotional poster also shows a black and red robot. 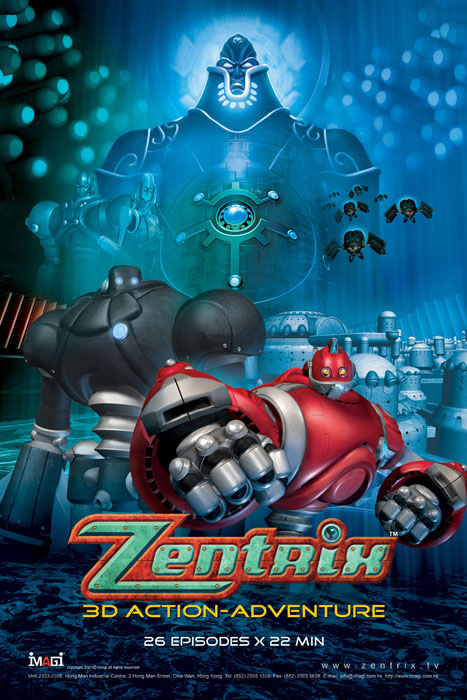 The relevant bits of the plot from Wiki:

Jarad takes precautions and develops two fighting robots - Zeus and Quantum. Zeus is then chosen over Quantum as the protector of his daughter, Princess Megan, should his mission in time fail. Following this, Jarad and Roark head back in time.

Robo Story (sometimes referred to as Robostory) is a French cartoon series that was created by Michel Pillyser and Bernard Kessler for the French production company Belokapi and first televised in 1985.

Robo Story follows the adventures of a small, orange-haired girl called Myrtille and her dog Loufi. In the opening title sequence we see Myrtille chase the mischievous Loufi onto a space shuttle that takes off with her inside. The ship crash lands on a world known as the Green Planet.

7
1980s robot cartoon. A boy, girl and a baby robot, they were red bodied with white heads
3
Old anime show with pirate, princess, and boy
5
Cartoon in which a boy and girl travel with a robot
7
Anime/Cartoon with a Giant Police(?) Robot
4
Cartoon with a girl who used boots to help her walk as she couldn't
5
Anime with a blue robot protecting a young girl
8
Old cartoon with a red? robot in a desert and a girl