What part of the mandrake plant is used for the restorative draught?

Mandrake (Mandragora) is an essential component of the Mandrake Restorative Draught.

The question is, what part of the plant is used? The leaves? The human-like root? All of it? 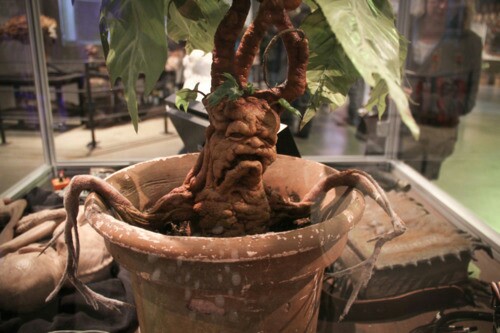 Would Prof. Sprout, the person who takes care of the Whomping Willow, agree to cutting up and boiling the mandrake creatures? After all they look and behave like humans. (At same point they go through puberty, described as moody and secrerive, even throwing a party in Greenhouse Three) on the other hand, mandrakes are used as projectiles in the Battle of Hogwarts.

We know for certain that Mandrake leaves were used in a variety of potions...

He, Ron and Hermione sat in the library as the sun set outside, tearing feverishly through page after page of spells, hidden from each other by the massive piles of books on the desk in front of each of them. Harry’s heart gave a huge leap every time he saw the word ‘water’ on a page, but more often than not it was merely ‘Take two pints of water, half a pound of shredded mandrake leaves and a newt …’.

Harry potter and the Goblet of Fire

For the space of one entire month (from full moon to full moon), a single leaf from a Mandrake must be carried constantly in the mouth. The leaf must not be swallowed or taken out of the mouth at any point. If the leaf is removed from the mouth, the process must be started again.

Short Stories from Hogwarts of Heroism, Hardship and Dangerous Hobbies

"Stewed Mandrake. Much quieter than the live version."

That all being said, the implication is very very clear. It's the root that's used, not just the leaves.

‘We will be able to cure her, Argus,’ said Dumbledore patiently. ‘Professor Sprout recently managed to procure some Mandrakes. As soon as they have reached their full size, I will have a potion made which will revive Mrs Norris.’

39
Are the Mandrakes sentient?

8
What Were Time Turners Used For?
5
Could the imperius curse wake up someone dosed with the draught of living death?
5
Would a Mandrake scream still be deadly if it were recorded and broadcast on the wizarding radio?
5
Is there any information on what the Strengthening Solution actually does?
34
How in the world did Slughorn prepare the Felix Felicis in time for his class?
23
What would happen if you used a dead person's hair in Polyjuice Potion?
3
Does the hand used for magic matter?
9
Are Pensieves used for criminal trials?
4
What was the entrail-expelling curse used for?
26
Did Alastor Moody know what name others used for him?